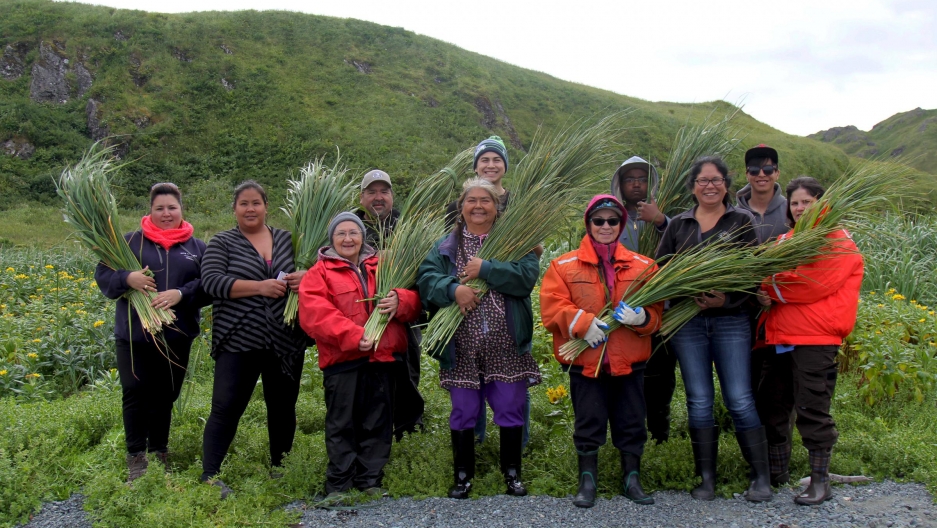 The Attu descendants spent time gathering grass on Attu to be used in traditional baskets.

In 1942, there were 44 people living on Attu Island, nearly all Alaska Natives. They were taken as captives to Japan, where half of them died. And after the war, the federal government forbade them from returning.

But in August, a group of 11 descendants finally visited their ancestral home for the first time.

Related: Seventy-five years after the Battle of Attu, veterans reflect on the cost of reclaiming US soil

Almost no one visits Attu Island. The only way to get there is by boat. It’s a long journey, as the island marks the westernmost point of the United States, and navigating the governmental red-tape that regulates Attu is a logistical nightmare.

But in the middle of a busy summer field season, the US Fish and Wildlife Service made time for the R/V Tiglax to ferry descendants back to their ancestral home.

“This was something I never ever expected to happen in my lifetime. To make it all the way there,” said Crystal Dushkin a descendent from Attu.

Dushkin is the mayor of Atka, and she grew up steeped in Unangan culture. She’s eager to see the old village site where her great grandmother, Mary Snigaroff (nee Prokopeuff) lived. 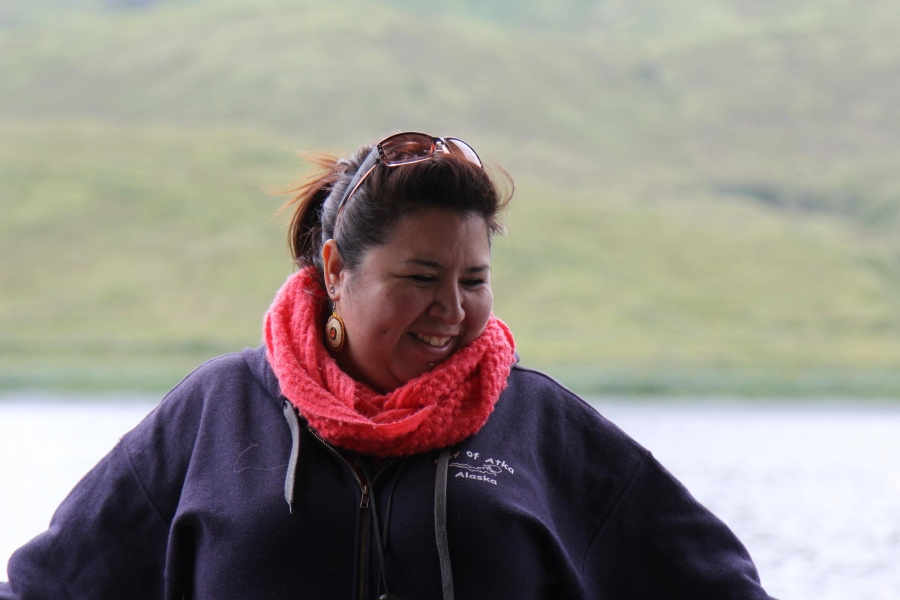 Had World War II not happened, Dushkin could have grown up there too. But in June of 1942, the Attuans’ lives were changed forever when Japanese soldiers landed on the island and captured all 44 residents. They were taken to Japan and held as prisoners of war. Nearly half of them died — many from malnutrition and starvation.

In the 75 years since, National Parks Service anthropologist Rachel Mason says the stories of Attu haven’t been shared.

“The descendants of those people never even had a chance to to learn about the experience in Japan or about Attu village,” Mason explained as the boat made a pit stop at Kiska Island. “Their parents didn’t want to talk about the traumatic experience.”

After the war, the US government didn’t allow the Attuans to return home. Mason says it was considered too inconvenient. Many settled in Atka, but others never returned to the region. A handful went to an orphanage, and some ended up in Pacific Northwest hospitals.

That includes Theresa Deal. Raised by two white parents in Vancouver, Washington, she never really learned about her birth mother’s life on Attu or her captivity in Japan. But Deal always got questions about her background.

“They think I’m Polynesian,” Deal said. “They think I’m Mexican. They think I’m all sorts of stuff and then I tell them, ‘No, I’m from the Aleutian Islands.’ Then you get the blank stare, so they get a lesson in geography when they meet me.” 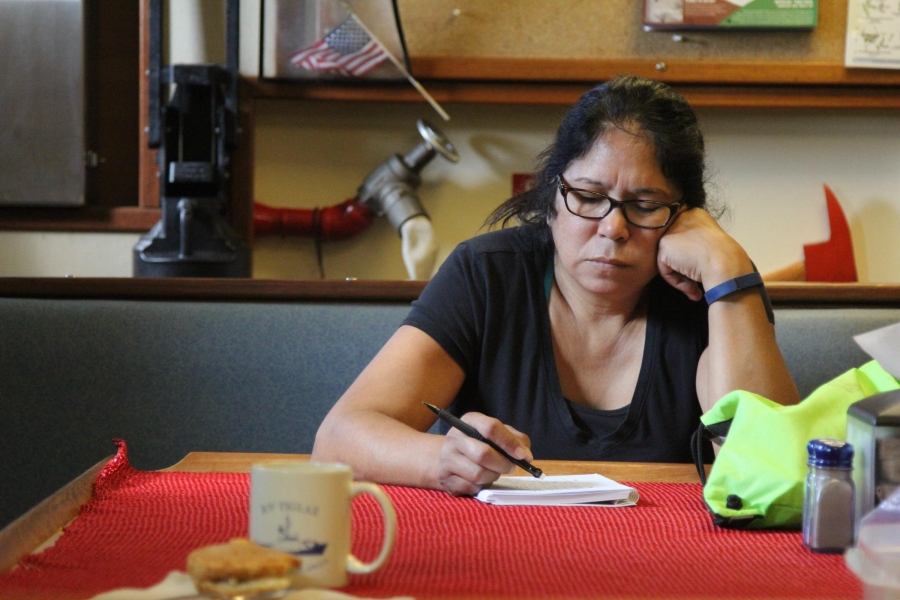 “I wish I knew more about the culture so I could tell my sons,” Deal said. “My sons know that they are Aleut, but they know less than I do.”

A stop in Atka gives Deal a glimpse of what her life could have been like had her mom, Marina Hodikoff, grown up there after the war.

From the second Deal steps on shore, Niigugim Tunuu  — the western dialect of Unangam Tunuu — fills the air. A brief church service is held to bless the cross bound for Attu. And over at the school, she watches students perform traditional songs.

“It was really quite eye-opening to see the love that they have for their culture,” Deal said. “I wasn’t immersed enough. I didn’t get that. So I do wish that Marina would have been relocated to Atka. Then my life would be different.”

For the descendants, the days spent on the boat feel like a big family reunion. But after two days of travel, it’s time for the part of the trip that everyone is looking forward to.

The old site lies in a protected cove encircled by lush green mountains. The grasses grow long and wild, interspersed with purple and yellow flowers. But there’s no sign of the former village.

As they take in the land, the descendants find the foundation of the old Russian Orthodox church, plant the cross, and hold a ceremony to honor their ancestors and their lost community. 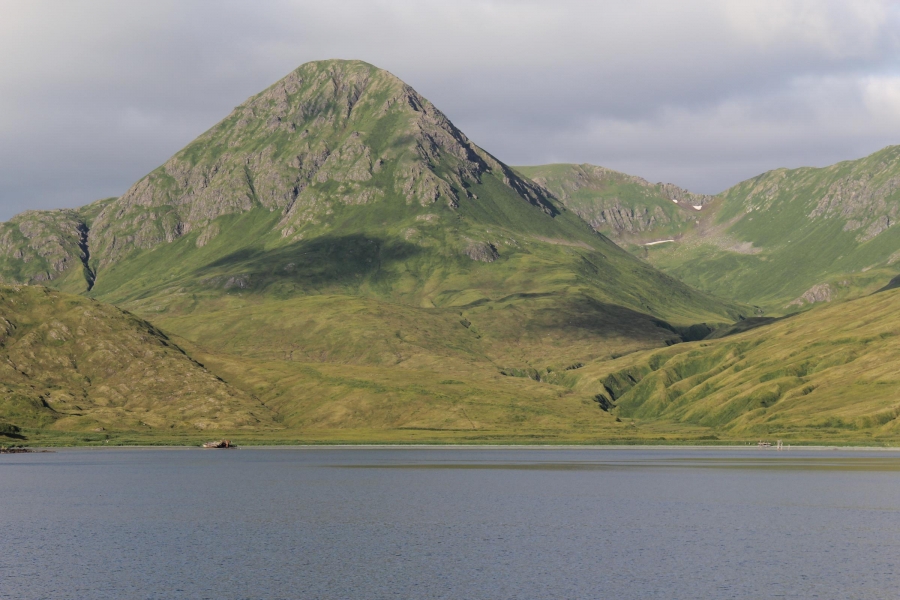 The old village of Attu was in Chichagof Harbor.

From there, many gather grass for traditional baskets — and Kiehl heads to the shore.

“I’m bringing dirt back to my sisters,” Kiehl said. “They’re going to be able to touch Attu, too. Just not in the same manner I did.”

Kiehl was raised in Port Angeles, Washington. Her mom, Agnes Prossoff, was from Attu, but she died when Kiehl was nine years old. Kiehl says she grew up without any exposure to the culture — no subsistence, no traditional dance or dress, nothing.

As she carries a plastic bag up the beach — filling it with sand, rocks and other treasures of the past — Kiehl is joined by Deal. They start to unpack some of the complicated emotions this trip has brought up.

“Christine, what do you think about being back here?” Deal asked.

“It made me cry because this was where my mother was born,” Kiehl said. “She was denied her life here, which would’ve been so much better. A different quality than she got in Washington.”

“I agree,” Deal said. “The people who were born out here and got to stay out here — they have such a different culture. They’re very proud of their culture, whereas we just grew up as regular Americans.” “It makes me angry because ... ” Kiehl said. 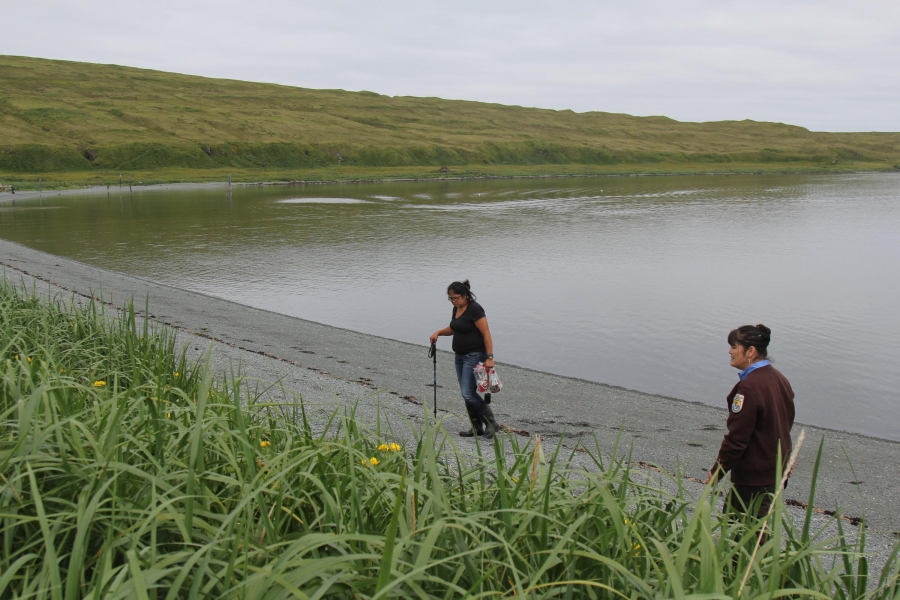 “Because our lives were also stolen,” Deal replied.

“Very stolen. It makes me angry,” Kiehl said. “And I don’t believe in racism or casting judgment. But it’s been really hard to not be angry at the Japanese for taking [my mother and the other Attuans]. They were just here minding their own business and living their lives.”

“Did your mom teach you that anger at the Japanese or is it just you?” Deal asked.

“No, I think it’s me,” Kiehl responded. “If she did teach it to me, I was too young to remember. It’s just really hurtful, but I know that they were just doing their job.”

Both of them agree that hate isn’t productive. Deal says she’s made a conscious choice not to hate the Japanese. Instead, she feels sad for them. And for Kiehl, she realizes that her mixed emotions stem from loss.

“There’s a million thoughts going through my mind because I’ve wanted to step foot on this island since my mother died,” Kiehl said. “I really feel that she died as a result of the war. She became an alcoholic and she was an anorexic and that ultimately took her life.”

But Kiehl says spending time with other Attuans is exhilarating. Because of this trip, she’s motivated to make her own regalia and bring grass back for her sister who weaves.

Deals says it’ll be hard to immerse herself in her culture, living outside of Alaska. But she’s hoping to return for a regional culture camp and learn more about her heritage.