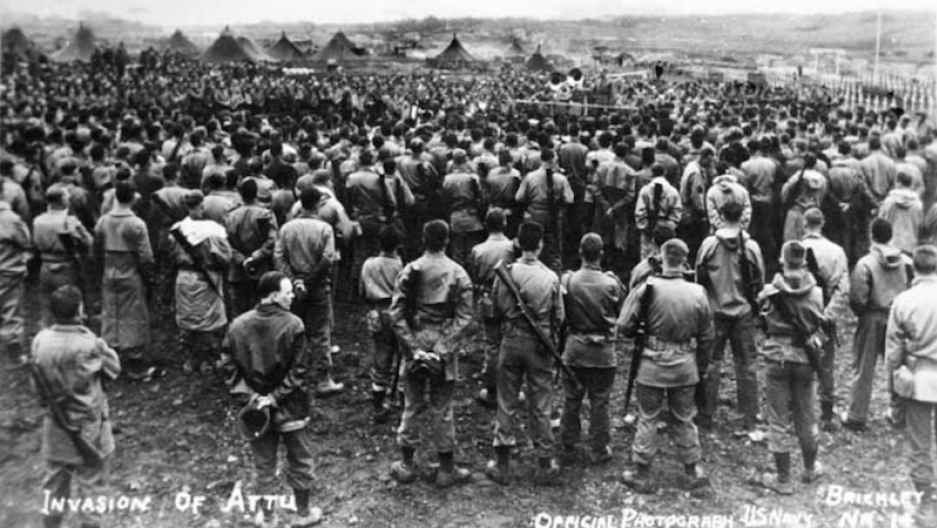 Because the Japanese had the advantage of time, the Americans attacked with quadruple the force — more than 12,000 soldiers.

A note to listeners and readers: A person in this story uses an offensive word for Japanese people.

Seventy-five years ago, Japan and the United States were locked in one of the bloodiest battles fought on American soil: the Battle of Attu.

Army veteran Allan Serroll served on Attu Island, which sits at the westernmost end of the Aleutian Islands — closer to Japan than Seattle.

Serroll is now 102. But he’s still haunted by the experience of staring down young men like himself.

“Some of the guys noticed that it was bothering me,” Serroll said. “They said, ‘Look, it’s kill or be killed. It’s your life you’re protecting.’ And they were right.”

In 1943, American troops were streaming into Alaska in preparation for one of the deadliest battles of World War II. That’s because one year earlier, Japanese soldiers had bombed Dutch Harbor, seized Attu Island, and took the Alaska Native people who lived there as prisoners of war.

It was the first time American soil had been invaded since the War of 1812.

Commanding officers told soldiers like Bob Brocklehurst of the 18th fighter squadron that the Japanese were looking to invade the Lower 48 by way of the Aleutian chain.

“They figured that if the Japanese had wanted to, they could've come up the Aleutians, taken Anchorage, and come down past Vancouver to Seattle, Washington,” Brocklehurst said.

But according to historian Jeff Dickrell, the Battle of Attu was really about reclaiming stolen land.

“There was a propaganda value in that,” Dickrell said. “Some of the higher-ranking people really wanted that. They wanted to be able to say the Japanese had been cleared from American soil.”

Because the Japanese had the advantage of time, the Americans attacked with quadruple the force — more than 12,000 soldiers. A United News newsreel showed soldiers clambering onto small boats, motoring to shore, and landing on Attu.

“The problem of supplying an expedition to take this vital subarctic outpost is tremendous,” read one 1943 newscaster. “But the Americans are well-trained for landings such as this, and they’re bringing everything they’ll need to hold Attu against future attack.”

The Americans brought heavy equipment, but the lack of roads made it useless. 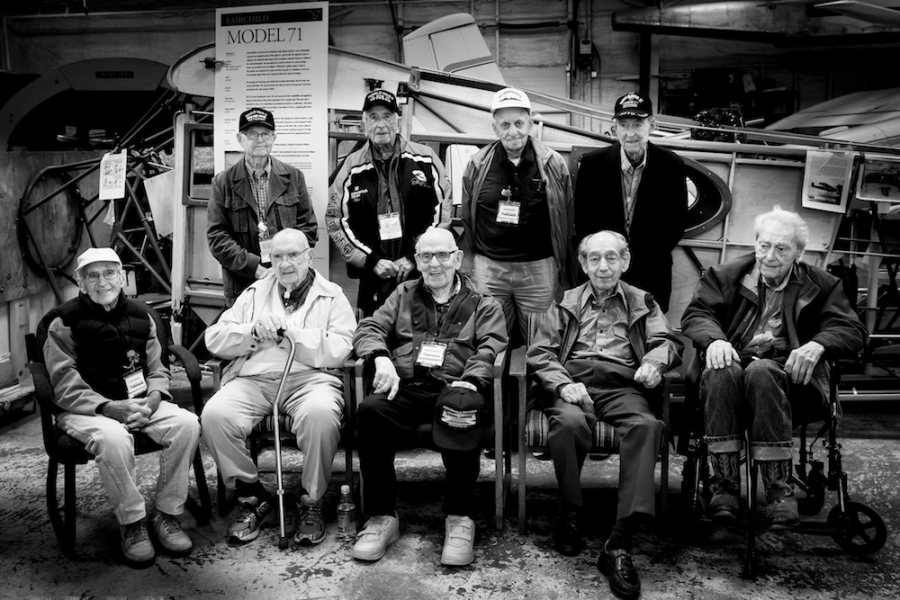 “It was strictly a foot job,” said Serroll, a former signal corps sergeant in an interview with the National Parks Service (NPS). “You had to walk. You had to carry your equipment.”

The battle started on May 11, and it was supposed to last just a few days. But because of the conditions, it stretched to 19 days.

The Americans slowly advanced on the Japanese from Holtz Bay at the north and and Massacre Bay in at the south, slogging their way through snowy tundra. The Japanese were camped out high in the foggy mountains above the visibility line. As the Americans sent scouts up into the hills, small skirmishes broke out when the two forces met.

Many soldiers were young and inexperienced. Some — like the 7th motorized division — had been training in the deserts of California for deployment in North Africa, so they’re weren’t expecting the brutal Aleutian weather.

It was constantly raining or snowing, but Serroll said the wind was the worst of all.

“You’d be walking along and all of a sudden, you’d be flat on your face,” Serroll said. “It was unbearable. If you wanted to plant a rifle, you just couldn't do it.”

Attu veteran Joseph Sasser told the NPS that he didn’t have clothing suitable for the conditions.

“We had rain suits, but that could prove a disadvantage to you,” Sasser said. “Because as you were walking and so forth, you would perspire. You didn’t get enough air, then you perspired. And then when you sat down to take a break, you got cold.”

Sasser was luckier than other soldiers. His clothes were wool, but some had only summer uniforms and they struggled with chills up in the mountains. Poorly constructed leather boots that never dried also led to trench foot. Soldiers’ foot tissues died, leaving their extremities to blacken and decay.

On top of all that, Dickrell said the Americans had never gone head to head with the Japanese on land. Every other battle had happened in the sky or at sea.

“When you fight on an island, there is nowhere to retreat,” Dickrell said. “It’s a battle to the end, and we didn’t know how the Japanese would react to that.”

By the end of May, both sides were feeling the toll of the battle. Food and supplies were scarce. The Japanese were down to 800 able-bodied men.

The Japanese soldiers followed the Bushido code, a samurai warrior ethic in which surrender was dishonorable. So every Japanese soldier who could walk assembled for a final Banzai charge, trying to catch the Americans off guard. Sasser was part of that last stand on Engineer Hill.

“The Japanese just kept coming up the ravines and stacking on top of each other,” Sasser said. “Some, seeing that everything was futile, that there was nothing they could do, just took their hand grenades and pulled the pins. Blew their stomachs out completely.”

Serroll was there too. He ran over after hearing the commotion. “When the Japs came at us running and screaming, they were ridiculous,” Serroll said. “They had grenades wrapped around their foreheads and around their chests. We lost quite a number of guys from the grenades.”

In total, 549 Americans died fighting. The Japanese casualties were catastrophic: 2,300 men died and just 28 soldiers were captured. Both Serroll and Sasser helped to bury the dead in mass graves.

But the real killer on Attu was the weather and disease. It took more American soldiers out of action than the Japanese.

After a battle with so many unexpected losses, the US stepped back and tried to learn from it. Attu veterans were interviewed so that other soldiers could be better trained for cold conditions. Changes were also made to Army footwear, clothes, outdoor gear, and food to prevent injuries.

While they were too late to save the lives and limbs of many Attu veterans, military officials credited the lessons learned with preventing casualties in the Italian campaign.

Still, many of those who fought in the cold and dodged the Japanese grenades came through the experience with more complicated feelings.

Looking back on the battle, Serroll said it was hard to wrap his mind around his own survival.

“When something good happened, I looked up and I said, ‘Thank you, God,’” Serroll said. “It made me feel good that the war with the Japanese was over and I survived it. But what about the poor guys who didn’t survive it? Japanese or American. It’s pure luck. What else can you say?” 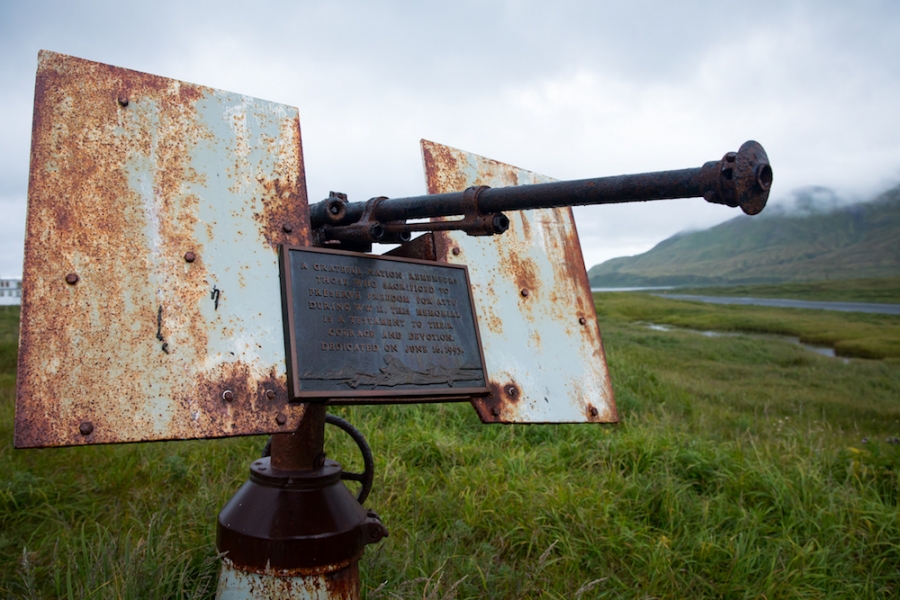 The plaque on this anti-aircraft gun reads: "A grateful nation remembers those who sacrificed to preserve freedom for Attu during WWII. This memorial is a testament to their courage and devotion. Dedicated on June 16, 1993."

Serroll remained stationed on Attu after the fighting ended. He spent time exploring the island, collecting samples of plants and filling a book with pressed flowers.

Now, 75 years later, he hasn’t forgotten the battle. Back then, it bothered him to shoot people, and he said that’s still true today.

“When you see people fall, it does something to you,” Serroll said. “I keep thinking that these people have wives and they have parents. How different are they from us? They’re just wearing a different uniform.”

Today, Attu is uninhabited. The Attuans who survived imprisonment in Japan were never allowed to return home, and the only hint of the island’s wartime history is the abandoned equipment left to rust.

This story was originally produced and aired at KUBC in Unalaska, Alaska.