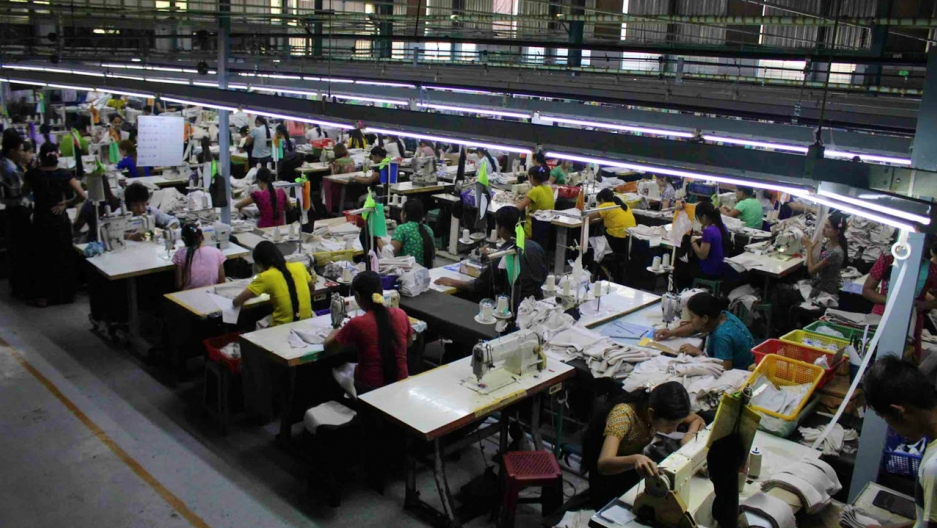 Behind Myanmar’s growing garment industry, which generates exports of $3 billion every year, are over 300,000 low-paid workers, 90 percent of whom are women.

Myanmar’s garment industry is set to rival China, but research shows that sexual harassment and violence in the workplace is hindering women’s opportunities and the industry itself.

Joining the likes of Cambodia, Indonesia and the Philippines in a bid to overtake China as the go-to country for mass-market clothing production, Myanmar is steadily growing its garment and footwear sector. New factories are popping up all around Yangon’s industrial center, generating exports of $3 billion every year.

Just as in many other countries catering to the West’s demands for fast fashion, Myanmar’s garment industry is plagued by reports of skirting workers’ rights. For the women who make up 90 percent of the garment sector’s workforce, that often means enduring harassment and discrimination.

Research shows that along with the potential physical and psychological costs of poor working conditions in garment factories, there can be significant financial harm, to both the women and the industry. To improve the economic well-being of Myanmar’s garment workers, experts and rights advocates are calling on employers and the government to better address personal safety and gender equality on the job.

Catherine Vaillancourt-Laflamme, chief technical adviser at the International Labor Organization (ILO), led a study on how best to end violence and harassment in the workplace in Myanmar. For the study, which is due to be published to coincide with the 107th session on the International Labour Conference, researchers spoke to workers in 16 foreign-owned factories. They heard stories ranging from a few cases of unwanted touching during work hours, to assault outside the factory, to questions about a woman’s marital status, as well as various examples of verbal abuse.

Vaillancourt-Laflamme says this report was the first time many of the women had ever talked about harassment. As a result, she says, “There was a lot of confusion around consensual workplace ‘teasing’ between friends and co-workers, and what constitutes ‘sexual harassment.’”

“Factories lack formal policies and processes to help respond to cases of workplace harassment and abuse when they occur,” she says.

Nobody has yet done a comprehensive study of how much sexual harassment and discrimination costs Myanmar’s garment industry, but a 2017 report by Care International shows that in Cambodia, the productivity cost of sexual harassment in the garment sector is estimated at $89 million per annum: $85,000 due to employee turnover as workers leave jobs where they feel unsafe, $545,000 due to absenteeism and $88 million in reduced productivity.

Related: How fair is your fashion? Take the quiz.

Prompted by the Cambodia figures, Ellen Maynes, gender operations officer at International Finance Corporation, which is part of the World Bank Group, says the organization is planning the first-ever attempt to measure the scope of workplace harassment in Myanmar and how much it’s costing the country’s businesses.

“There is currently little data on the forms that sexual harassment and bullying take in Myanmar, or the prevalence, or the financial costs to companies and the economy,” she says.

Only the women at the machines

After 50 years of military rule, Myanmar is one of the fastest growing economies in southeast Asia. But its laws are struggling to keep up.

The government has drafted and revised various pieces of legislation meant to protect workers’ rights, such as the Labor Organization Law which protects workers’ rights to unionize and the Occupational Health and Safety Law. But it took almost five years of discussion for the government to draft a law that criminalizes violence against women and is expected to provide legal grounding for workplace anti-sexual harassment policies. It’s currently still being finalized in parliament.

“I wish there was a law to protect women, that would be much better,” says Thandar Ko, founder of women’s rights group BusinessKind, which educates garment workers on their rights through a weekly cafe meetup. “But there isn’t, so many workers are too scared to speak out about working condition problems or harassment.” 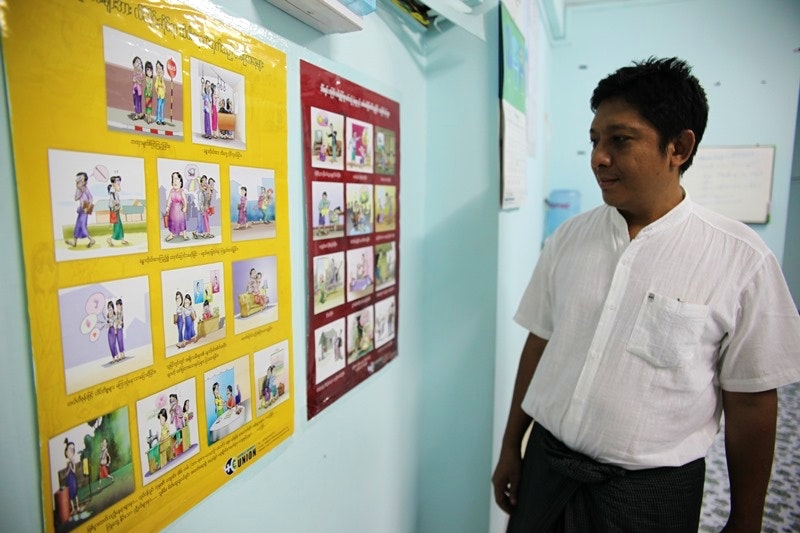 Workers’ rights activist Thurein Aung reads an anti-harassment poster that is being displayed in garment factories around Yangon. Researchers say workplace harassment could be costing the industry millions of dollars a year.

Myanmar has made some moves to improve working conditions in the country, with the minimum wage rising from 3,600 kyat ($2.70) a day to 4,800 kyat ($3.50). But that minimum wage is still one of the lowest in Asia, putting further financial strain on women who are already endure discrimination with every paycheck.

In a separate soon-to-be-released assessment of 79 factories — both local and foreign-owned in the country — the ILO reveals that low-skilled and middle-skilled women workers earn 7 percent less than their male colleagues.

Related: How a sweatshop raid in an LA suburb changed the American garment industry

“[That] has potential impacts on decision-making in the workplace, control of labor conditions and control of the labor force,” Vallancourt-Laflamme says.

Supervisor Myo Myat Myat Myo has worked in the industry for 14 years and says most of her days inside the factory were under a male supervisor.

“Although you see mostly only women at the machines when you walk into a factory, supervisors and managers are usually men walking down the rows,” she says.

The wage disparity in Myanmar’s garment factories is a problem for all the women workers, but makes life especially difficult and dangerous for the migrants from rural areas who make up most of their numbers. 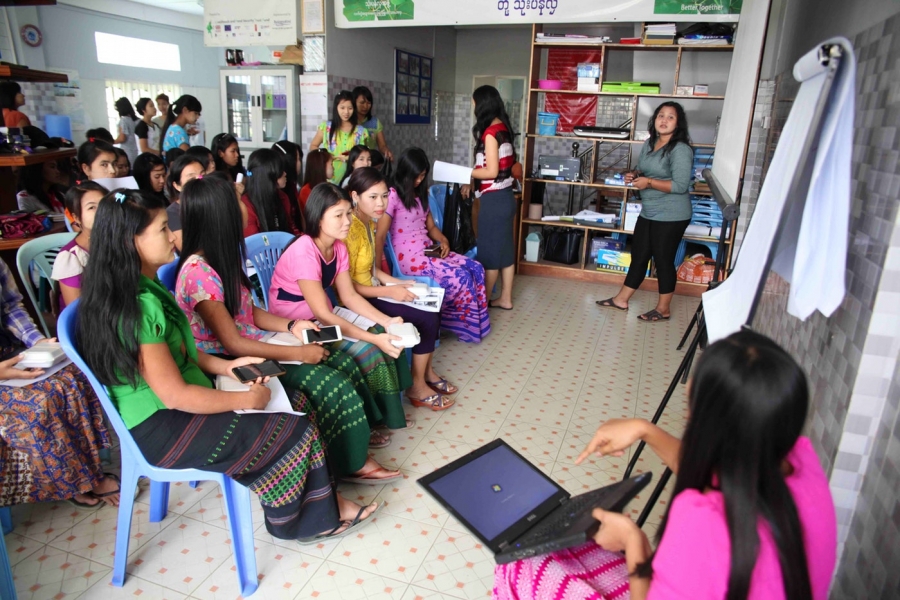 At a meeting run by women’s rights group BusinessKind, garment workers discuss changes in the minimum wage. Even with an upcoming rise, Myanmar’s minimum wage is still among the lowest in Asia.

After Cyclone Nargis killed 138,000 people and made 2.5 million homeless in 2008, thousands of people migrated to Yangon, hungry and desperate for work. A 2016 report by the C&A Foundation, the charity arm of European fashion brand C&A, shows that 76 percent of Myanmar’s garment workers are young women who have migrated from rural areas to Yangon.

These women send up to half their income home to their families, meaning they have to survive on less and often can’t access safe housing and transportation. “This exposes them to unscrupulous people with dubious intentions,” Vaillancourt-Laflamme says, increasing their chances of going into deep debt.

Wai Wai Lin, 18, from Irrawaddy division, moved to Yangon on her own last year to look for work. Now she works in a shirt factory, making just enough to pay for rent, food and phone credit. The rest, she sends home.

Lin knows that many garment workers have it worse, but she intends to endure this job only as long as necessary.

Lin says she prefers to travel to and from work with friends, but due to pressure from her supervisor to work overtime she often finds herself going home alone at night, and sometimes gets sexually harassed by men on the street. Unlike a lot of factories in the country, the shirt factory has a ventilation system, but she says employees still don’t get enough water breaks. And during lunch, they have to sit outside, which can be unbearable in the summer heat.

Lin knows that many garment workers have it worse, but she intends to endure this job only as long as necessary.

“I want to work only a few years that I have to here, to save enough money for my family,” she says. “Then I want to go home.”