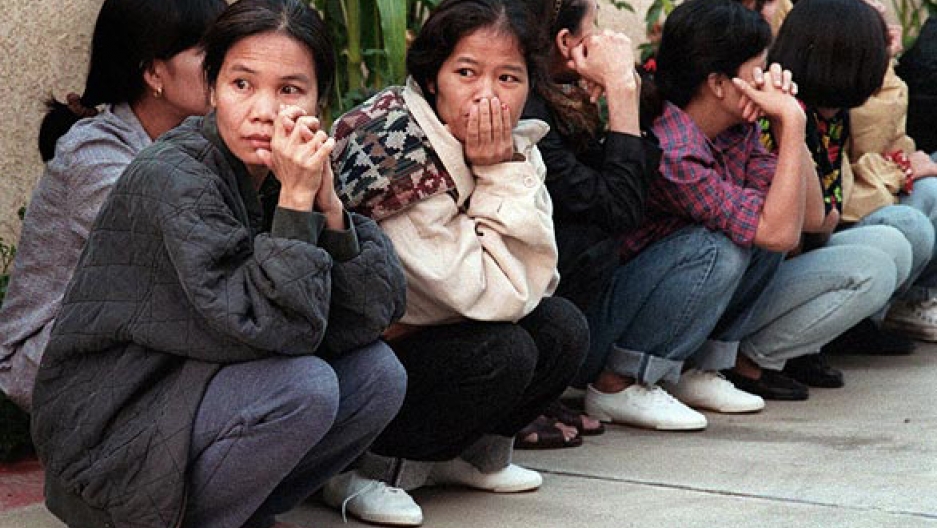 The morning of the El Monte raid, former captives sit outside the housing complex.

When Rotchana Sussman arrived in Los Angeles in 1994, she thought she was about to start a new, well-paying job as a garment worker.

She had worked in a factory in her native country, Thailand. She’d heard that work in Los Angeles paid three times as much. But when Sussman, then 24, arrived at Los Angeles International airport in early 1994, she was taken directly to the small suburb of El Monte. It’s a low-income community about 22 miles from the Hollywood Hills. The housing complex where Sussman was taken was encircled by barbed wire.

And it had 24-hour armed security. 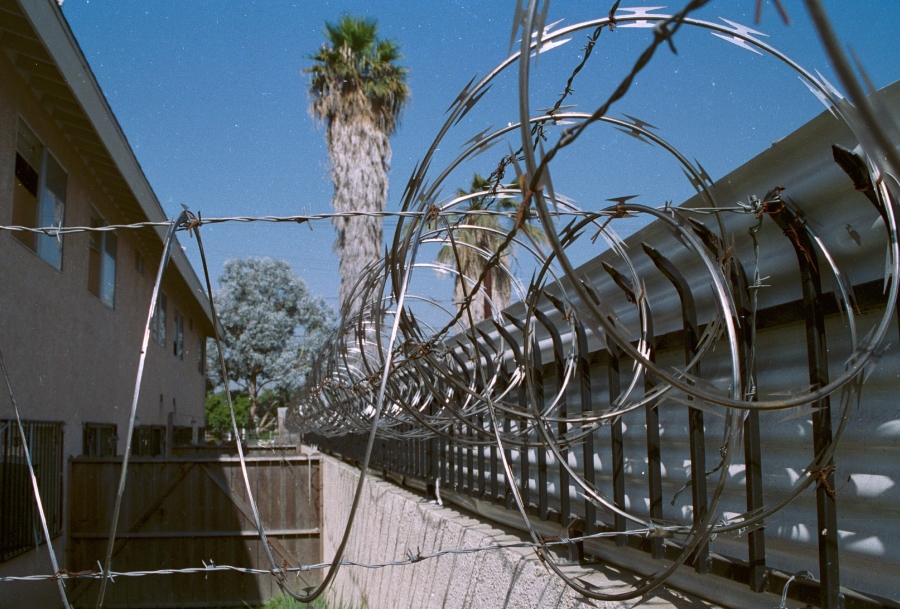 This is a photo outside the house, which had barbed wire.

“They took our passports; they said, ‘Let us hold it for you,’” explains Sussman.

This is part an Across Women's Lives project: "Wear and Tear series: The women who make our clothes." Read another story in the series: Her job at the mill bought her a new, better life. And, participate in our interactive: How fair is your fashion? Take the quiz.

The downstairs garages had been converted into sewing rooms. The upstairs rooms, where the workers slept, had boarded-up windows. 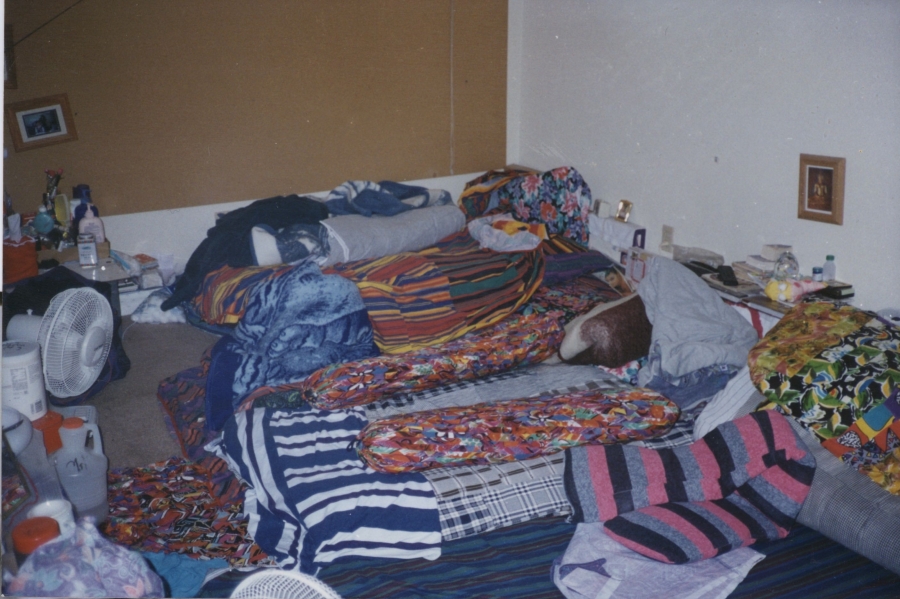 This is a snapshot of the crowded sleeping quarters.

Sussman lived in the apartment complex with 71 other Thai nationals. They were virtually slaves. They were paid $400 per month, but they were told they had to pay back the money they owed to get to the US. And on top of that, they had to pay for food, soap and toothpaste, which their employer sold to them at exorbitant prices. 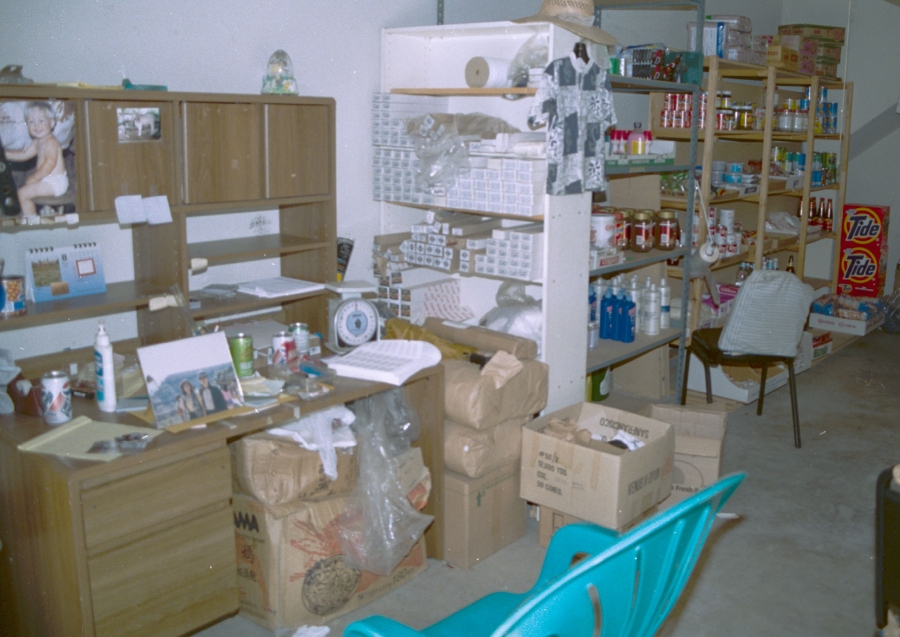 This was the company store.

Every morning, the garage doors of El Monte opened just wide enough to push out bags of newly made clothing. The clothing was transported downtown where brand-name retailers would purchase the goods.

Then in the early hours of Aug. 2, 1995, authorities raided that apartment complex in El Monte. Chancee Martorell is the founder of the Thai Community Development Center. She assisted in the raid that morning.

“The US Marshals and El Monte police told us that they would come in first,” Martorell says, “because they’d identified the last building being the living quarters of the perpetrators, the traffickers, the employers. And that they would secure that one first, and they would apprehend those people first because they were the people with weapons.”

The photographs of the El Monte raid show a group of haggard women lined up and crouching up against a wall. Their hands cover their mouths, and their gaze is distant, petrified in shock. Some had been held captive in that building for as long as seven years.

The raid resulted in former President Bill Clinton creating a garment industry sweatshop task force and led many industry leaders to make a “No Sweatshop” pledge.

“The El Monte raid was a very important point in the history of labor standards in this country,” explains David Weil, the former administrator for the Wage and Hour Division of the Department of Labor. “It surfaced both the enormity of the problem and, in fact, how dire conditions had become for some of the workers in the supply chains in the garment industry.”

But 22 years after El Monte, the problem of sweatshops is still widespread in LA. Los Angeles has the highest concentration of garment industry workers in the country. And even if authorities aren’t finding workers confined like in the El Monte case, they are finding widespread minimum wage, overtime and record-keeping violations.

The garment industry typically employs large populations of immigrants with limited English language proficiency. They are often unaware of their rights or are reluctant to speak up.

Many garment workers have undocumented immigration status. And it makes it hard for workers to report safety violations.

“You are covered by the basic labor standards of our law regardless of immigration status,” says David Weil. “The problem is many of those [undocumented immigrants] have to, in a sense, work in the shadows. And even if they are aware of their rights under the law ... they don’t exercise their right to complain about that or bring forward an investigation because of fear of deportation, because of fear that their employers will, in one [way] or another, retaliate for their use of rights.”

Los Angeles still maintains a booming sweatshop industry in part because it’s the most efficient way for fast fashion to make it to the stores.

For retailers, having a garment made quickly in LA means it can be shipped domestically much faster than an order coming from China or Bangladesh.

But there is a human cost to having those garments in stores so quickly, according to Weil.

“As consumers, we might benefit from low prices but the reality is, both on the international supply chain front and even those garments sourced in this country, often those lowest prices come at the expense of the workers who are producing them. I think we have to be aware as consumers of the injustices that can rise from low prices.”

There was some justice for the men and women held in that housing complex in El Monte.

The perpetrators served prison sentences of between five and seven years.

And Sussman built a life for herself in LA, becoming an American citizen. She and the others held captive in El Monte also received a $4 million civil settlement. 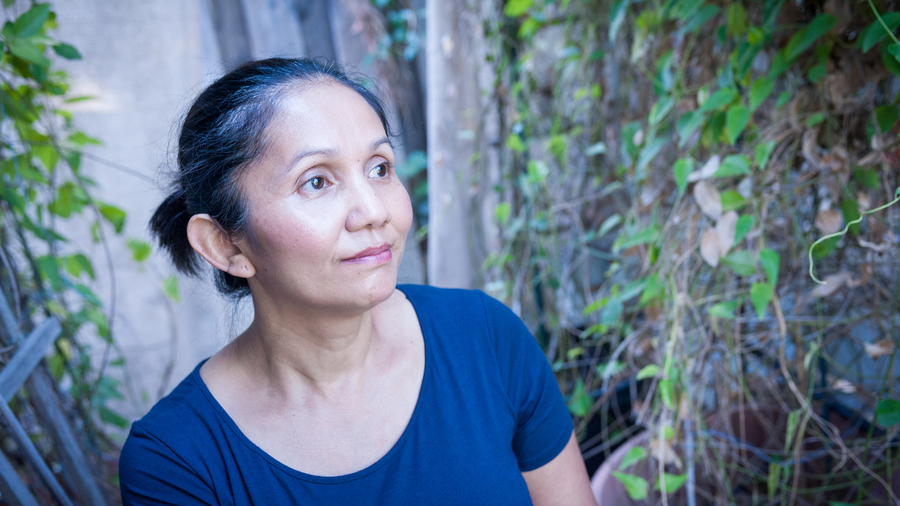 Rotchana Sussman at her home in Los Angeles.

Her case also changed the law regarding human trafficking. A federal law that was a result of the El Monte case finally passed in 2000.

As for Sussman, she’s about to open up her own Thai restaurant.