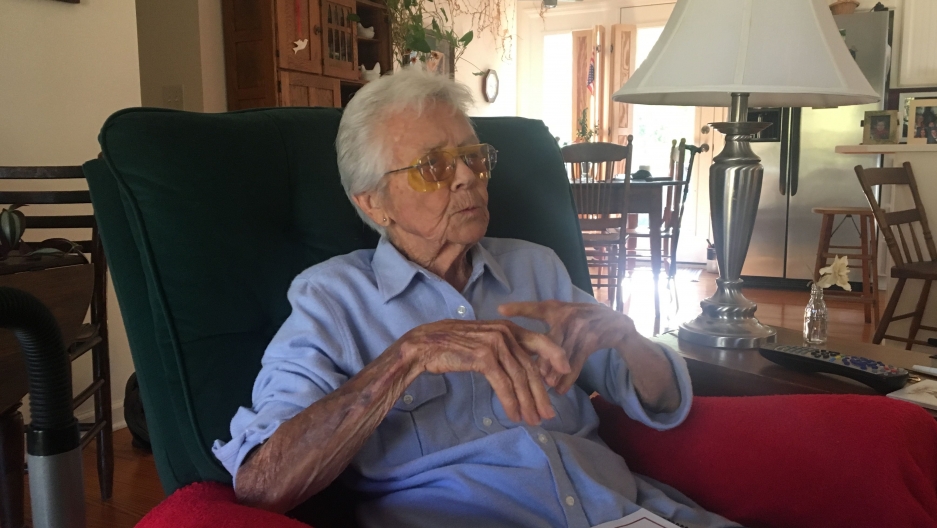 In Roanoke Rapids, North Carolina, people like to tell a story about how in the middle of the summer, it used to snow. The white flakes would swirl around and stick to your hair and your car and your lawn. It was all over the place.

This wasn’t snow, though. It was cotton, floating out of the town’s seven cotton mills. This was before air conditioning was commonplace, and the factories would open their windows to let a breeze in.

Acree Bell Lassiter, 89, who now lives just outside the town, remembers those days well. “My daddy was a sharecropper,” she explains.

Lassiter is one of the many women who found independence in mill work during the industry’s peak. She spent her nearly 60-year career at a local mill, beginning just after World War II. When she retired in the 1990s, the industry was on the decline, nationwide. It moved overseas, and the impact this had in Roanoke Rapids is still evident today: Just two of seven mills are still standing, and they have been abandoned. The town’s unemployment rate hovers around 10.5 percent, more than twice the national average, according to 2015 ACS data.

Lassiter comes from a big family, with 16 brothers and sisters altogether. “I couldn’t go to college. Couldn’t do anything but go to work.” What little money they had always went to the boys in Lassiter’s family. “My daddy never gave us girls any money. But he would give the boys money. I used to wonder, ‘Well, why didn’t he give us something?’”

But Lassiter’s life changed when the US joined World War II. Lassiter’s brothers went off to fight the Germans and, like so many young women, she went to get a job. Lassiter, then 17, was hired at a local cotton mill.

“The first week, I worked for 40 hours. Guess what I got? I got [paid] $16. ... I was called a ‘creeler.’ You’d have things of yarn about this large,” she says, talking with her hands. A creeler is a textile worker who tends the creel, or a rack holding bobbins or spools for spinning and other aspects of a yarn tufting or twisting machine or another kind of loom. “You’d put so many of one color here, and so many of one color here.” Lassiter worked at one of the seven mills in town, all of which were owned by J.P. Stevens & Co. They made tea towels, bathrobes, bed sheets and various cotton household goods.

Roanoke Rapids was a typical Southern mill town and Stevens, the country’s second-largest textile producer, had moved its operations to North Carolina and other Southern states seeking cheaper labor. Stevens, founded in Massachusetts in 1813, closed four Northern mills between 1947 and 1963. By 1966, Stevens employed nearly 40,000 people in 70 plants scattered across the South.

“It was the main employer in town, and I think the companies liked that because they could dominate the labor market, get a good supply of labor and keep wages relatively low,” explains Timothy Minchin, a professor at La Trobe University in Australia who has studied labor law and textile mills. “J.P. Stevens even provided textile equipment into the high schools and taught them how to do it as part of the high school education. It was so integrated into the economy, that’s what you did if you grew up there.”

And that’s just what Lassiter did. She earned enough money to buy her first car, moved out of her father’s home and rented a room in a boardinghouse near the mill.

Her job at the mill bought her a new, better life.

But Lassiter recalls a day when her supervisor handed each employee a towel, ones that had been made there in Roanoke Rapids. The employees were told that they needed to work harder. The supervisor said that in China, the same cotton towel could be manufactured much more cheaply.

At the same time, union organizers targeted Stevens for an organizing campaign. The industry’s move to the South hurt membership: Between 1954 and 1963, the Textile Workers Union of America lost 42,820 members because of the closure of organized Northern mills. In 1963, the average wage in the company’s Southern plants was $1.55 an hour, 10 percent lower than wages in the North.

The union began a 20-year battle to unionize the mills and Roanoke Rapids, with its cluster of seven mills, was one of the locations chosen for the campaign.

“J.P. Stevens was a labor law violator,” explains Minchin, who detailed the history of the fight in a recent book titled, "Empty Mills." “It fired workers who were in the unions. They really pioneered this sort of union-avoidance strategy that a lot of American companies have used since the 1980s.”

The 1979 Oscar-winning film, “Norma Rae,” dramatized the fight that happened in Roanoke Rapids.

In what has become an iconic scene, Sally Field as Norma Rae stands up on her work table with a handwritten sign that says, “Union,” while she waits for police to remove her from the plant after she is fired.

The movie tells the true story of a mill worker and union organizer, Crystal Lee Sutton. In the early 1970s, mill girls like Sutton earned less than $2.80 an hour and worked six days a week.

Sutton was fired for trying to rally workers at her mill to unionize and later went on to work as a union organizer.

TWUA launched a union campaign in 1973 and a year later won the vote in one mill in Roanoke Rapids. But Stevens refused to bargain in good faith and not much came of the election.

“Like a lot of wars, it weakened both sides, really, and it probably didn’t help either of them in the long run in terms of the challenges they faced,” Minchin says.

Instead of bargaining, Stevens made a point to match the wages of unionized textile plants and promised payouts regardless of stock market performance from the employee profit-sharing plan, two decisions that gave workers less of a reason to unionize. When a new contract was signed in 1980, mill workers’ pay went up to nearly $5 an hour, on average, and it led to safety and health policy changes to improve conditions in the workplace.

Locals complain that when wages went up, the industry went away, but the textile market would face a host of challenges before it finally collapsed.

“Within about 40 years, 2 million jobs were lost, which is a huge amount, and most of them were in towns like Roanoke Rapids,” Minchin says. “You can see the pace of that decline really pick up because of NAFTA, China coming into the World Trade Organization, the end of the Multifiber Agreement, and automation, as well.”

NAFTA shifted much of American textile production to Mexico; China’s addition to the WTO allowed it more favorable trade rates and the Multifiber Agreement, which lasted from 1974 to 2005, put limits on how much yarn and material developing countries could export, which protected more developed countries like the United States. All these factors combined to close factories in mill towns like Roanoke Rapids.

This is one of two mills still standing in Roanoke Rapids, North Carolina, though it has been abandoned.

As the jobs left the mill towns, Minchin says people had to turn to low-wage service jobs, like retail, fast food and motels. Workers lost health care and regular shift work, all of which had made it easier for them to care for their families.

“A lot of these towns are isolated, like Roanoke Rapids is,” Minchin says. “There’s no big city nearby, there’s not a reason to go there and they get left behind when the industry goes.”

But she says when she was driving through town a few years back, she saw the mill where she worked for all those years being demolished.

One of the demolition crew guys told her she could try to find her old desk in there and take it home as a memento. “And I went down there. But I couldn't find it.”