For every new podcast episode, the Bollywood Boys co-hosts recreate the posters of the film that they are about to revisit. Their April 30, 2018 episode was about the 2001 film “Yaadein,” starring Hrithik Roshan and Kareena Kapoor.

Two years ago, during Ramadan, Saagar Shaikh and Shaan Baig were in a car hanging with friends when they went down the rabbit hole of revisiting all of their favorite ‘90s Bollywood songs. It started with “Oh Oh Jane Jaana,” the 1998 classic from the film "Pyar Kiya Toh Darna Kya," which Shaikh credits with getting him into Bollywood in the first place.

Then they moved onto Baig’s favorites, all the old-school Shah Rukh Khan hits. Soon, they were reminiscing about how they used to try to memorize the dance moves when they watched the movies.

They remember their parents buying bootleg copies of Bollywood films from Indian grocery stores back in the day. The VCDs — video CDs from the '90s — often came in box sets of four CDs for each movie. They’d watch about 30 to 45 minutes of the movie before they had to switch CDs.

“A lot of them would be like some uncle sitting in the theater recording the screen,” says Baig. “They were terrible quality, and they either wouldn’t have subtitles or they’d only have subtitles on every fifth sentence, so I’d have to get my parents to translate the movies as we watched.”

That day two years ago, while remembering their childhoods, they decided to start a podcast where they revisit classic Bollywood movies. They eventually called it Bollywood Boys.

“We just thought, if we feel so much listening to these songs, there must be a large population that also feel what we feel,” says Shaikh.

Except now, they’re watching the films on streaming sites like YouTube, Netflix, and Amazon Prime Video. And the films have standardized English subtitles for anyone who doesn’t understand Hindi or Urdu.

Shaikh grew up in Houston and San Antonio, Texas, and Baig grew up in Bloomfield Hills, Michigan. While they loved Bollywood music as young children, both rejected the movies during adolescence.

“I remember thinking they were really corny and lame,” says Baig. “Secretly, I’d have my favorites, but I’d never be outspoken about it. But then as years went by and I didn't really associate them with my parents forcing me to watch them, and I became less embarrassed of my culture, I discovered them on my own and started really liking them a lot.”

“I grew up in Houston, where there were a lot of brown people, so it was everywhere as a kid,” remembers Shaikh. “But when I moved to a predominantly white area in San Antonio, I stopped watching them completely because, suddenly, it wasn’t cool anymore. So from age 14 to 23, I didn’t watch a single Bollywood movie. It wasn’t until I moved to LA, and I felt like I was losing that cultural part of myself, that I started watching them again, catching up on what I missed out on.”

Now in their early 30s, Shaikh and Baig are actors active in the Los Angeles comedy scene; they will both be in “South Asian AF” (an offshoot of the popular Asian American sketch show “Asian AF”) which debuts in Los Angeles on May 31. Shaikh recently starred in the web series “Unfair & Ugly.” When Baig isn’t podcasting or performing, he’s a dentist.

On the podcast, they improvise, do impressions of the stars, make up characters and riff off of each other as they revisit Indian movies from the past. Now they cover more recent movies too, “instant classics,” as they call them. 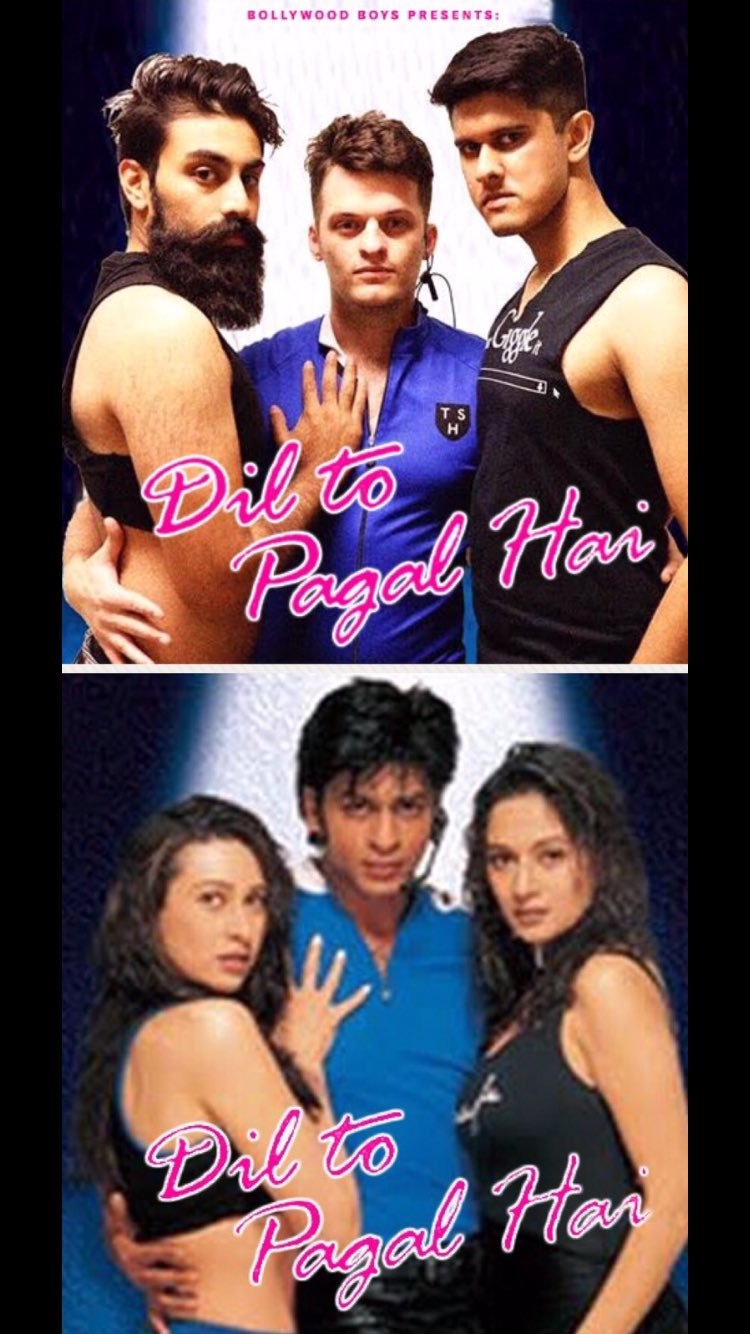 On top, the Bollywood Boys recreate the poster of the 1997 film “Dil To Pagal Hai.” Saagar Shaikh (left) takes the place of Karisma Kapoor, their guest Greg Giebel (center) is Shah Rukh Khan, and Shaan Baig is Madhuri Dixit (right). The original is below.

Nowadays, it’s not just the mainstream Bollywood box office hits that have become more accessible, says Mike Dougherty, the director of programming at the Indian Film Festival of Los Angeles, which is known more for bringing the independent cinema of India to American audiences.

Dougherty’s first exposure to Indian cinema came through the arthouse film “Monsoon Wedding” and “Lagaan,” which was nominated for an Academy Award for best foreign film. Both of these films premiered in 2001.

As recently as a decade ago, most Americans would have to go to a film festival or a theater specializing in Indian films to see Indian cinema, he says.

But access to international content has changed rapidly. Two years ago, Netflix expanded from streaming in 60 countries to 130. For digital media companies, India — and its half a billion internet users — has always been a main target. It's the second most populous country in the world after China, which is for the most part blocked to US content providers.

Netflix launched in India in early 2016 and Amazon Prime Video followed later that year, both attempting to compete with the country’s local streaming service, Hotstar. And as these US companies chase Indian subscribers, mutually beneficial deals with Indian entertainment companies means Indian-made media is also exported and available to watch globally.

One of the earliest high-profile collaborations was a 2016 content deal between Netflix and Shah Rukh Khan’s production company Red Chillies Entertainment. In April, Netflix announced a deal with Indian pay-TV group Tata Sky.

Amazon Prime Video, in turn, picked up rights for films of another Bollywood superstar, Salman Khan, as well titles from Karan Johar’s Dharma Productions and Mukesh Bhatt’s Vishesh Films. They made news last year when they ordered an unprecedented 14 comedy specials from Indian stand-up comics and this year, they released 23 more. Amazon Prime Video’s Asia-Pacific content head, James Farrell told Reuters that his company is also targeting South Indian films in languages such as Tamil and Telugu.

In addition, both Netflix and Amazon Prime Video are also investing in original series by Indian creators.

“Most of the producers that come to our festival know that a small regional film from India is not going to get a US theatrical release, no matter how good it may be,” says Dougherty. “But there are possibilities for them in the online spaces, and if they don’t have those connections in India, we try to offer our filmmakers access to industry executives in LA that can help either with their current film or future projects.”

Dougherty remembers his parents coming from the suburbs of Philadelphia to attend the Indian Film Festival of Los Angeles a few years ago. Despite not having any connection or knowledge of Indian cinema, they saw three movies in a row and loved all of them.

“My mom asked, ‘Are these going to be in theaters?’” Dougherty remembers. “And I said, ‘Maybe some of them will be in arthouses, but they won’t be in your local multiplexes unfortunately.’ But a couple of them are now on Netflix, and she got really excited and told her friends to watch them. That’s the kind of word of mouth you want to happen.”

New to Bollywood? We're talking about which movies to watch in the Global Nation Exchange on Facebook.

With more and more titles available, he also points to the need for curators, whether it be bloggers, podcasters or everyday fans reviewing films on social media who can act as guides to direct the average viewer.

Shaikh and Baig don’t consider themselves experts, but with their comedy, they’ve attracted a growing online community of listeners who have been inspired to go down the rabbit hole of watching Indian films with them. Their passionate listeners from all over the world send them questions for each upcoming episode, engage in debates over the merits of certain beloved classics, even fact check them afterwards when they get something wrong.

“There was an article about [actor] Irrfan Khan that was calling him ‘the Hindi medium star,’” remembers Baig. “And Saagar and I were like, ‘Hindi medium? He’s a big star. Why are they calling him Hindi medium? He’s Hindi large.’ And then all these fans started tweeting at us. You idiots, ‘Hindi Medium’ is a name of a movie that he was in. It’s not implying the level of his stardom.”

“That happens a lot,” says Shaikh, laughing. “My brother texts me after each episode with a list of corrections.”

June 5 marks the one-year anniversary of their Bollywood Boys podcast, and what they most appreciate is the way it’s helped them fully embrace their culture, as well as how easy it’s been to connect with others who are also trying to learn more about the ever-evolving Indian film industry.

“I love seeing through the years, what was cool, what type of fashion was in, which actors and actresses were popular,” says Baig, “because Bollywood is such a huge and important part of Indian, Pakistani and desi culture, and I felt like I was missing out on it for so long, separating myself from it. It feels so good to dive back into it and understand it now.” 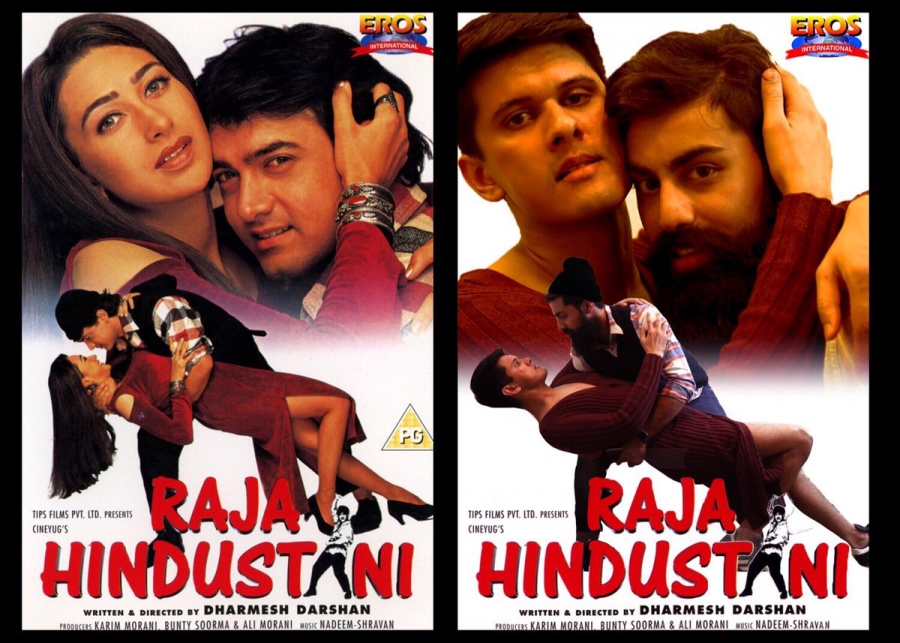