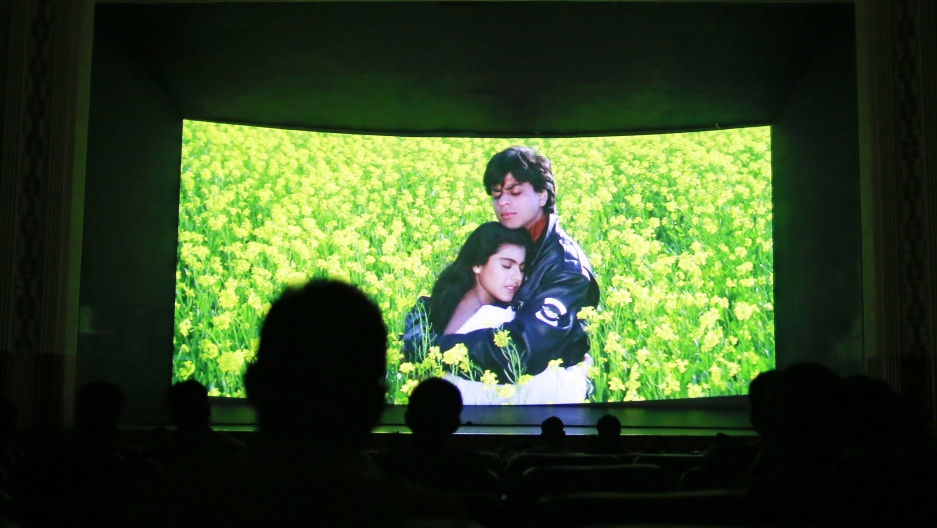 Bollywood actors Shah Rukh Khan and Kajol on screen during "Dilwale Dulhania Le Jayenge" inside Maratha Mandir theatre in Mumbai Dec. 11, 2014. The movie, released in October 1995, has set a record of completing 1000 weeks of continuous screening at a cinema, a feat unmatched by any other Bollywood movies.

“I love him from his old-school mullet days,” she says, though she’s seen every one of his more than 80 films since then. “He played the lead actor’s younger brother, and there was a musical number where he and his girlfriend were riding on his bicycle. He was wearing a white shirt, brown leather jacket, and 1987 jeans that were way too high, and I was like, ‘I want to be that girl! He’s so handsome and dreamy!’”

Desai is a New York-based instructor for Doonya, a Bollywood-inspired dance fitness workout. From Tennessee, she spent parts of her childhood in India and London and remembers watching Hindi films with her Indian babysitter while her physician parents were working night shifts at the hospital.

While some Americans are primed for the return of Star Wars, for Desai, tonight is opening night for Dilwale ("The Brave-Hearted"). Though Dilwale is not technically a sequel, the title invokes Khan’s popular film Dilwale Dulhania Le Jayenge (“The Brave-Hearted Will Take The Bride,” also known as DDLJ), which celebrated its 20th anniversary this year to much fanfare. But to call it popular is, perhaps, underselling it. One theater in Mumbai showed the film for almost 20 years continuously. By some estimates, DDLJ box office earnings are $45 million. But $2 million came from outside India, from fans like Desai.

And 20 years later, enthusiasm for the 90s romance endures. Dilwale reunites Khan with DDLJ actress Kajol. The pair are often referred to as India’s most beloved onscreen couple, though Khan has successfully wooed almost every single Bollywood leading lady single.

Let’s just say, he’s got a lot of charm on screen. And his personal life just adds to the folklore. Born in a Muslim middle-class family in New Delhi, Khan met his Punjabi Hindu wife Gauri when they were teenagers. In a storyline that mirrors the intensity of the DDLJ story, he had to fight for her parents’ approval. Their long-standing marriage has become a symbol of Khan’s ability to bring different worlds together. If you look at the most successful Indian films based on revenue made internationally, Shah Rukh Khan stars in 11 of the top 25, according to a new book about his global appeal.

“He works hard to perfect his craft, but his craft involves more than just being an actor,” says Desai. “His craft is being a superstar. It’s his appeal to the masses that makes him legendary.”

When President Barack Obama visited India in January, he quoted a DDLJ line in broken Hindi to the surprise and delight of Indians around the world. It was a gesture to Indian Prime Minister Narendra Modi, who, when visiting New York in 2014, ended his speech with the Star Wars line, “May the Force be with you.”

Coincidentally, Desai owns a T-shirt featuring the same DDLJ line. She ordered it while she was in college. When she got married — she's now in her mid-20s — her fellow Doonya instructors gave her custom mugs that depicted one of DDLJ’s most iconic scenes. One mug features Khan, his arms outstretched, and the other features Kajol, just before she runs through a field of yellow flowers and into his tight embrace.

Brian Hu remembers seeing Khan onscreen for the first time at a film festival as a college movie critic. He was a fan of classic black-and-white Hollywood musicals and felt that Bollywood filled a void that was missing in contemporary American film.

“I remember feeling so emotionally overwhelmed by the end,” he says. “Shah Rukh Khan’s films really show how he can be star of every single genre in one movie. He’s a comedian, he’s a romantic hero, he’s an action star, he’s the center of a family drama, and he can switch back and forth and pull it all off.”

Ten years later, he now includes Bollywood films in the San Diego Asian Film Festival, where he is the artistic director, and often screens DDLJ when he teaches media classes at the University of San Diego.

“People sometimes ask me, ‘Do you have to be South Asian to teach Doonya?’” Baumann says, which confuses her because she is Korean American. “The passion and love for the music is universal, and the more you learn, the more you appreciate it.”

To Baumann, it’s all about celebration. “Sometimes there’s so much tragedy, and Bollywood can provide an escapism with the color, music, and uplifting beats,” she says. “It’s about being in the moment, imagining you’re in a beautiful, dancing world where everyone ends up with their dream boy or girl and your parents are happy. And it’s so much fun.”

Want to go down the Shah Rukh Khan rabbit hole? Here are some good places to start.

A previous version of this story misstated where Jeannie Baumann works and where Natasha Desai is from.