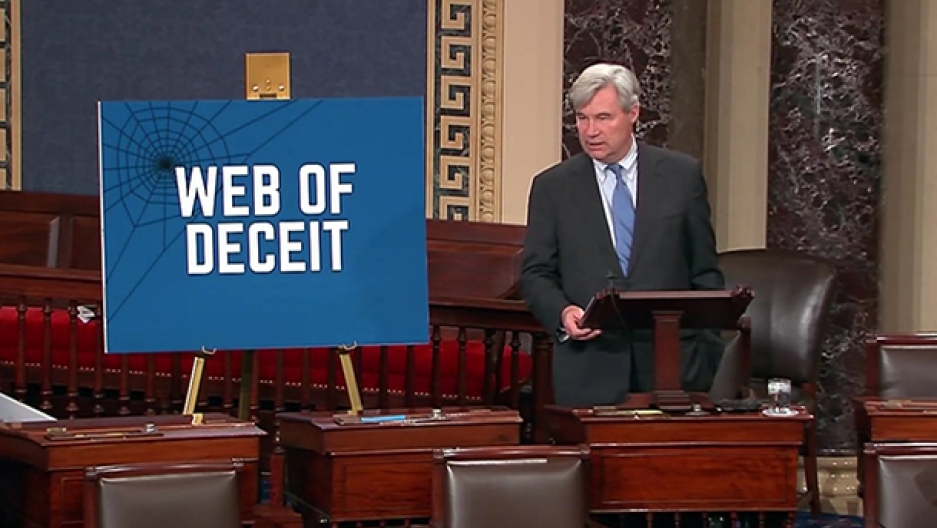 Senator Sheldon Whitehouse (D-RI) spoke on the Senate floor on April 23rd, 2018 to raise concerns about the connections between the Koch network, the Trump Administration, and Congress.

A group of six Democratic senators wrote to the Trump administration last month asking it to explain its ties to the conservative fossil fuel magnates Charles and David Koch.

The Koch brothers have claimed credit for administration policies such as shrinking national monuments, gutting the Obama-era Clean Power Plan, killing a moratorium on coal leasing on public lands, and pulling out of the Paris Climate Agreement. Leading the Senate call concerning undue influence by the Kochs is Rhode Island’s Democratic Sen. Sheldon Whitehouse.

“I don't think there's any group that has more influence,” he says. “They run a political operation that is wealthier, better prepared, more disparate and has more updated data than the Republican Party itself. I think it's very clear to Republicans that you cross the Koch brothers’ political operation at your peril.”

“Wherever you turn,” Whitehouse says, “you see people who are infiltrating the administration out of that Koch brothers apparatus. It's to the point where it's not even clear that this is really a Trump administration rather than a Koch administration operating with either the connivance or permission of the Trumps.”

The Koch brothers’ wealth and unique position in the oil and fossil fuel industry has led to their outsize influence over politicians.

“Between the gas pump and the wellhead is an enormous amount of American industry — in pipelines, in petrochemical manufacturing and refining — and the Koch brothers and Koch Industries sit in the middle of all of that,” Whitehouse explains. “A lot of their so-called 'deregulatory freedom agenda' is nothing but a cover for being able to continue to pollute without any government control over them.”

For the most part, the Kochs don’t want their own names associated with their lobbying and political spending, so they have funded a “considerable array of front groups whose only purpose is to launder their identity and the identity of other donors, so you can't follow the money behind these front groups,” Whitehouse says.

They have also turned to supporting universities and cultural organizations to “create a veneer of legitimacy around some of the things that they do,” Whitehouse adds. “The purpose of all of this is to create a broad and, to the average reader, confusing array of multiple voices all saying the same thing. What they don't want you to see is that, behind all those tentacles is the same creature.”

This operation has been going on for decades, particularly with the rise of the oil industry at the turn of the 20th century. But Whitehouse says the Koch influence operation “has reached a new level of determination and sophistication.” He says the days when the American lead lobby fought to keep poisonous lead in paint and the Tobacco Institute campaigned to convince the public that smoking was safe now seem quaint.

“By comparison,” he says, “the Kochs run dozens of front groups, all with very benign or patriotic sounding names. It’s a far, far more clever influence operation than those early institutes.”

Whitehouse’s letters to the EPA, the Department of Interior, other federal agencies and the White House asking for details about the administration’s ties to the Koch network have received no response so far.

“Not getting a response is a significant fact in itself, so I'm not sorry that we sent these letters,” Whitehouse says. “But, I do think it is important that, if a shadow government is being run within the United States by these billionaires, the public know that, and not just lose faith in government without an understanding of what is causing their frustration.”

“Our network is committed to driving action in Washington, and we’ve made clear that we’ll work with anyone to make progress on important issues. We have reached out to Republicans and Democrats alike, pushing to reach a permanent solution for Dreamers, expanding access to potentially life-saving treatments for terminally-ill patients, and long-overdue reform to our criminal justice system. The American people are tired of political games and hopefully both sides of the aisle are willing to step forward to address these pressing issues.”