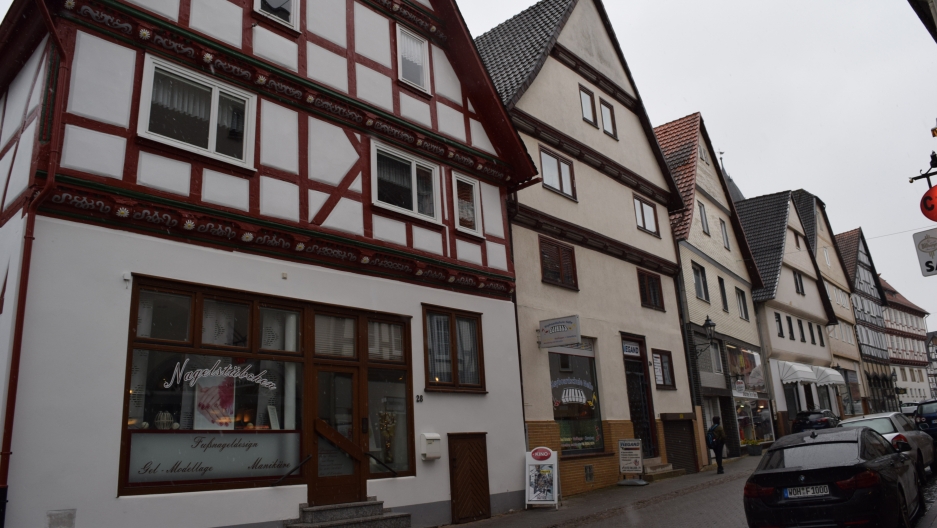 Because of renewable energy sources, Wolfhagen, Germany, with 14,000 inhabitants, is able to generate about 106 percent of the its electricity needs throughout the year. The surplus is sold to neighborhing communities, and Wolfhagen's residents receive dividends from the sale of the electricity.

With its centuries-old timber-framed houses and cobblestone lanes, Wolfhagen could easily illustrate a Grimm Brothers' fable.

But for all of its medieval charm and pastoral feel, this town of 14,000 near Frankfurt has taken a big step into the future over the past few years. It has embraced Germany's push to get rid of most fossil fuels and use 100 percent green energy instead — ahead of almost everyone else in the country.

Wolfhagen is an example of a community that took its energy future into its own hands and did what many other communities in Germany and around the world are struggling to do: be self-reliant and sustainable.

"We're definitely further along than others," said Reinhard Schaake, the mayor of Wolfhagen since 1999. "But I think that Wolfhagen shows that this energy transition can actually work."

In the 1970s and 1980s, the global gas crisis and the disaster at the Chernobyl nuclear reactor caused a rethink in Germany and elsewhere regarding reliance on gas and nuclear power. The seeds of an idea to go fully renewable took hold and eventually became known as the Energiewende, or “energy transition.”

In this period, calls to phase out nuclear energy grew — Germany stopped building nuclear reactors and the first quasi-subsidies for solar and wind energy were introduced. A decade later, the country enshrined firm goals into law for how much green energy should make up the total percentage of energy used: By 2050, for example, Germany must get at least 80 percent of its electricity from solar, wind and other renewables. It must also decrease greenhouse gas emissions by at least 85 percent by 2050 from 1990 levels.

Related: How do you catch the sun to make electricity at night? This German inventor has an answer.

In 2003, Wolfhagen started taking those goals to heart. 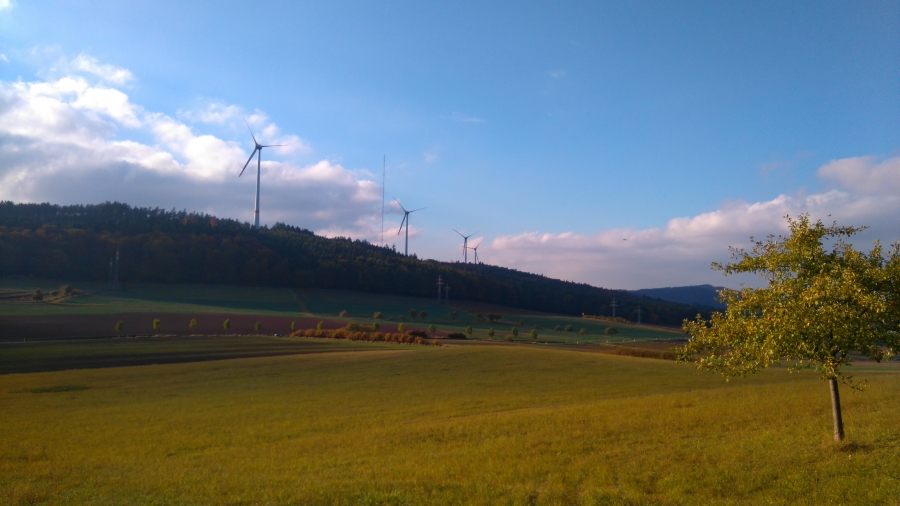 Town officials say they wanted residents to become directly involved in producing their own electricity. They also wanted the profits from electricity sales not to flow to a big energy company but rather to be reinvested into local schools, sports halls and other city works.

The plan was to be self-sufficient — and 100 percent green in a decade or so.

"We all developed the philosophy that we don't just want to maximize profits as an energy producer selling electricity," said Alexander Rohrssen, the chief executive of Stadtwerke Wolfhagen, the town-owned power plant. “Rather, we want to offer residents and customers the opportunity to get involved in the economics of the operation, all while saving energy.”

Town officials therefore jumped at the opportunity to buy back the town's power grid from energy giant E.ON when its contract expired in 2003. They also began to build up wind, solar and biogas farms once the sale was finalized a few years later.

Today, with four windmills, a 42,000-panel solar farm and two biogas facilities that turn waste into energy, the town is able to generate about 106 percent of its electricity needs throughout the year. Because the plant generates more than the town needs, leftover electricity is sold to neighboring communities. The scheme makes a profit every year, which is paid out in dividends to Wolfhagen's residents.

Contrast that with Germany as a whole, which only produces about 36 percent of its electricity from renewables. It's ranked 19th globally on the World Economic Forum's sustainable energy index — the United States clocks in at number 52.

And in spite of billions spent on the energy transition, its slow progress toward its goals is making it unlikely it will meet them in the future, say analysts.

Still, the transformation wasn't simple in Wolfhagen: Proponents naturally faced some initial opposition to going green. Opponents to the move balked at the costs — a single wind turbine alone can cost up to $6 million, a large sum for such a small community. There was also worry over how solar and wind farms would mar the town's medieval cityscape and how noise pollution would shatter the quiet charm of rural life.

"I always thought that renewable energy was super and that we had to do something to protect the environment but it's different when you're confronted with concrete plans," said Iris Degenhardt-Meister, who lives about a mile from where officials proposed constructing four wind turbines, and had her misgivings about the plan at first.

But after weighing the concerns versus the environmental benefits and the prospect of the city profiting from producing its own energy, Degenhardt-Meister, like many other residents, got on board.

She rallied support for the initiative and helped form a co-op of Wolfhagen residents who raised $2.84 million to buy a 25 percent stake in the city's power plant.

These days, the biggest obstacle the town faces — indeed, all communities and countries confront — in going green is nature: It doesn't always cooperate.

For example, when the sun shines or when it's windy, wind and solar farms produce more than the town needs. But on cloudy, windless days — common in this region of Germany — the town must buy energy from other energy producers because the technology doesn’t exist yet for sufficient storage of green electricity on this scale.

That volatility is one of the biggest reasons why Germany, on the whole, has been so hesitant to phase out coal: This source of energy produces about 40 percent of the nation's total.

Another issue facing the town is that using renewables is just one piece of becoming carbon neutral. For example, homes need to be renovated to curb heating waste, which in 2017 contributed to 30 percent of all energy-related emissions. Cars need to go electric to decrease fuel consumption and agriculture needs to develop sustainable practices, analysts said.

Germany as a whole is behind in tackling those issues and predicted to miss its emissions reduction target for 2020 of 40 percent over 1990 levels by as much as 10 percent.

Still, now as the town pats itself on the back for its environmental — and profitable — transformation, it is looking ahead, trying to tackle the issues that still remain, said Mayor Schaake.

"One question we're always candid about is, ‘Where do we go from here?’" he said. "We have to pay close attention to what's technologically possible, while also addressing economic concerns."

Wolfhagen intends to hire a town “climate manager.” It's also discussed sustainable practices with local farmers and considered how to use less raw materials in new building stock. The town's power plant has even developed an app that helps industry and households know when to best use electricity to take advantage of sun and wind energy.

In this new era of the energy transition in Germany, new ideas on the local level could lead to bigger strategies later on, said Matthias Lang, an energy attorney at Bird & Bird law firm in Düsseldorf, who has seen a number of small communities take the plunge into running their own energy production.

"Someone needs to just try it out, even though there's no guarantee at this stage how it will work," he said. "That's why it's exciting for someone to try it out and to look at how much effect they'll have."