Solar power production has grown more than 25 times over the last decade in Germany, spurred largely by big incentives for small producers to get into the market. But sunshine and wind power are intermittent, so engineers and others are looking for ways to balance out the flow of these renewable power sources through new storage technologies.

Wolfram Walter is a man obsessed with things electric.

Not yet, but you never know. The engineer from a small town in southwestern Germany is a classic tinkerer. His home is his development lab, and when he’s not wiring up his vehicles, he’s working on the latest iteration of an invention that he thinks will help solve what might be the biggest problem in Germany’s energiewende — its historic transition from fossil fuels and nuclear power to mostly solar and wind power.

Just a few years in, the country already gets more than a quarter of its electricity from renewables. But those sources aren’t always available, which limits their effectiveness.

Wolfram Walter with his first home solar storage system, which he built when he was unhappy with any of the others he could find on the market. Barely a year after he started testing it out in his own house the Sonnenspeicher/Sun Storage system won an award for innovative renewable product of the year in Germany.

“In the moment, if you have solar power you just have power by day,” Walter laments. Same for wind. You have power when the wind blows, but no power when it doesn’t.

Walter says for many people, his invention solves that problem. It’s a metal box about the size of a small refrigerator. Hook it up to solar panels on your roof, Walter says, and “you have a power plant working 24 hours day, 365 days a year.”

More from the Series: Innovation to ease the green energy bottleneck

Part 2: A power company that easily handles surges in solar and wind energy

Part 3: The car of the future — the very near future — might be driven by the wind

Walter’s a soft-spoken guy, but he’s hardly shy about what he and his colleagues have come up with. He says it will “change the world.”

A bold assertion, but here’s why Walter believes it.

Germany hasn’t solved this problem and no one else has either. And until we do, the dream of a massive switch to renewable energy in Germany, the US or elsewhere will stay just a dream.

It’s a complicated problem, but in large part it comes down to the limitations of batteries. They’re notoriously inefficient and cranky.

People everywhere are scrambling to build a better battery, but it’s been a long, slow slog. So Walter’s basically done a workaround. Instead of a better battery, he’s built what he says is a better way of using the batteries we already have.

He calls his system the Sonnenspeicher — Sun Storage, and he builds it in a small, spotless factory in the town of Umkirch, just a short electric Porsche ride from his house.

The Sonnenspeicher starts with a set of off-the-shelf Lithium-Iron-Phosphate batteries. Walter says they’re the best out there. But the potentially world-changing difference is his special sauce — a proprietary mix of electronics and software that maximize the batteries’ efficiency and lifespan and micromanages the flow of electricity between the solar panels, the batteries and the grid so that as much of it as possible stays onsite, stored in the batteries and released only when needed. 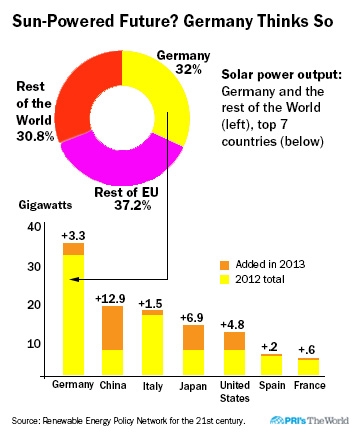 It’s not an entirely new idea, a smart battery, but the innovations developed by Walter and his colleagues were significant enough to earn the Sonnenspeicher a German Renewables Award for Product of the Year in 2013. That was barely a year after he started testing out his very first one at home. Today he says his new company, Automatic Storage Device, is selling hundreds of the systems a year to homes and businesses in Germany and beyond.

It’s all been a pretty quick ride for something Walter developed in his garage and says he never intended to sell.

Like thousands of other Germans, a few years ago Walter installed solar panels on his roof. But after just four days, he says, “I was very disappointed about that system. Because it produces a lot of energy by day, (it) is going to the grid, and in the evening I came back, I have to buy it back by night.”

That’s the way it works for most small solar producers. The electric grid serves as a sort of virtual battery.

But there are big drawbacks to that setup. One brings us back to the intermittency problem. The grid just wasn’t built to handle intermittent sources of electricity. And too much of it can make the whole system unstable.

So he decided to buy a storage system, to keep his solar-generated electricity at home.

But, he says, “nothing on the market makes me happy. So I decided, no problem, I will do it better, for me. And we developed that system. And a lot of people came and say, ‘oh, it’s a nice system, can we buy it?’ And then we decided, OK, let’s try, maybe it’s a business.”

Critics of renewable energy often refer to wind and solar as intermittent energy sources – meaning they are not always continuously (or predictably) available due to some outside factor (e.g. the wind is not always blowing nor is the sun always shining). Innovation in energy storage technology, however, is starting to overcome such factors.

One of his first customers was Gunther Reidle, a self-described “technic freak” who lives a couple of towns away in a big house with a lot of solar panels on the roof.

Reidle’s Sonnenspeicher sits in his basement, next to the inverter from his solar panels, and he says he goes down there two or three times a day, “just to look how it works, how much energy I saved, how much I collected.”

Not everyone who buys a Sonnenspeicher will be so obsessed with the details. But here’s something they probably will pay attention to:

That’s about $1,300, which means Reidle will pay off his system in about eight years. After that he’ll be making money. And that, Wolfram Walter says, is the key to making renewable energy technology like this take off.

Sure, he’s concerned about climate change and Germany’s dependence on other countries for their energy, some of the big reasons behind Germany’s energy transition. But Walter says there’s one key to getting people to adopt the technologies that will make it all happen:

That, he says, changes the whole equation. 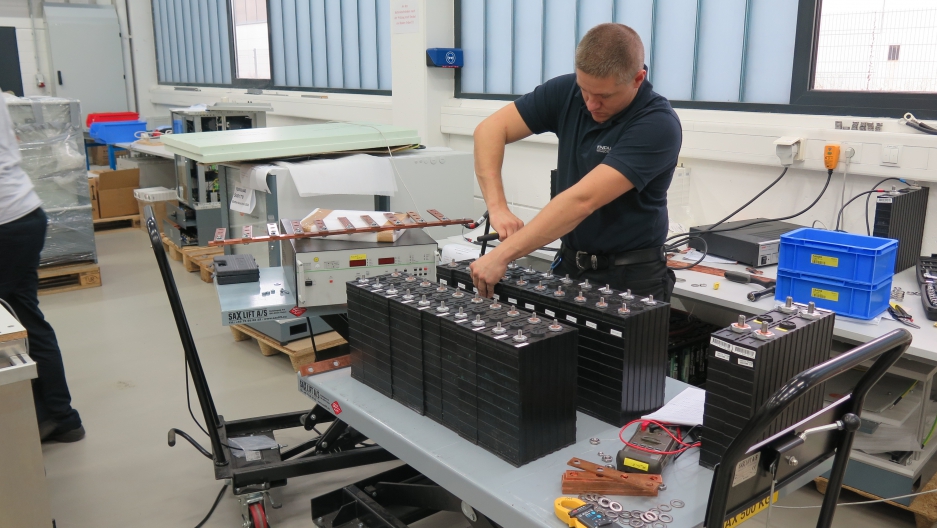 A technician checks a bank of lithium-iron-phosphate batteries for installation in a Sonnenspeicher system at the ASD factory in Umkirch, Germany. Wolfram Walter says his company's specially-designed electronics and software overcomes many of the limitations of current battery technology.

An old-school garage tinkerer, Wolfram Walter also converted his bicycle and this Porsche to run on electricity, often provided by the solar panels on his roof.

Of course Wolfram Walter’s invention won’t solve the storage problem by itself. Among other things, the limitations of current battery technology mean that systems like this likely will only be practical for homes and small businesses, buildings that don’t use a whole lot of electricity. At best it’s a small piece of the extremely complex challenge of generating and storing enough wind and solar energy to supplant coal, oil gas and nuclear.

But Walter is determined to be a big part of that transition. And he’s already working on version 2.0 of his Sonnenspeicher. He says it’s smaller, cheaper and more reliable than the version that won that award.

And again he adds, “this will change the world.”

We can only hope he’s right.

Peter reported from Europe with the support of an Energy and Climate Media Fellowship from the Heinrich Böll Foundation.