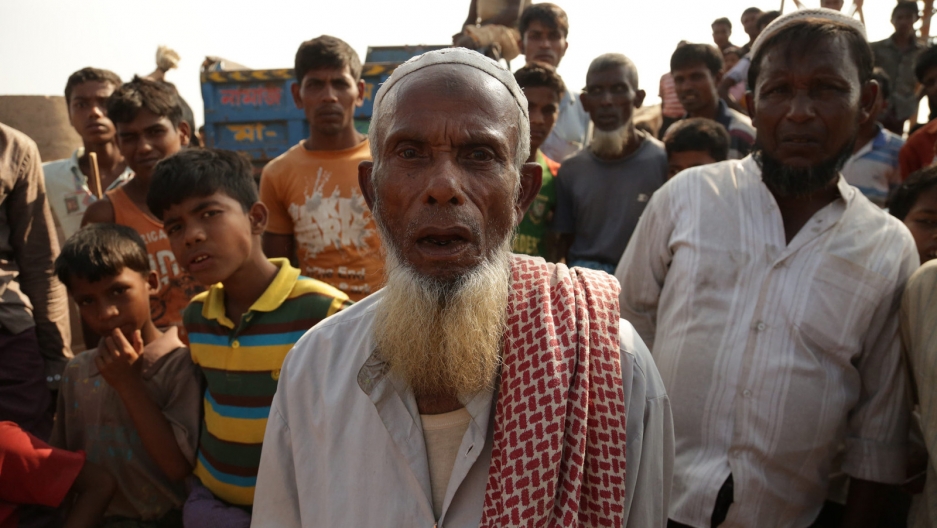 An elderly Rohingya man in the Kutupalong camp in Bangladesh. When this photo was taken, every member of his family had been injured in the violence aimed at the Rohingya people in Myanmar, forcing them all to flee to neighboring Bangladesh. Close to 800,000 Rohingyas have fled Myanmar for Bangladesh since the fall of 2017.

UK Dept. for International Development/CC BY 2.0

Picture enough people to fill the city of Charlotte, North Carolina — living in makeshift housing in an enormous camp with only one road running through it and one road going around it. Now picture massive amounts of rain.

Such is the stark reality for more than 700,000 Rohingya Muslims from Myanmar, also known as Burma, who reside in the Kutupalong camp in neighboring Bangladesh. They began leaving their homeland last fall to escape military violence by their country’s own government in what the United Nations has deemed to be a case of ethnic cleansing. To escape the crackdown, a steady stream of refugees have been arriving each day, incrementally complicating the fragile living conditions.

“There really is only one camp and the density of this refugee camp is astounding,” says Pavlo Kolovos, who leads the mission for Doctors Without Borders in Bangladesh.

All that density has been a breeding ground for diseases — a situation expected to worsen when the monsoon rains start in July. They usually end around September or early October. Those who arrived at the camp last fall only experienced the tail end of the torrential rains.

Such treacherous conditions — and limited infrastructure — make the distribution of essential materials for food and housing nearly impossible.

“The houses start to fall apart under the weather conditions,” Kolovos says.

Most of the Rohingya — who the Burmese government insists aren't citizens — have never received health care services, making them susceptible to outbreaks of communicable diseases. First, there was a wave of measles. Then, came a surge in diphtheria, which came as quite a surprise to the medical team.

Kolovos and his associates immediately began giving out the diphtheria vaccine, but it takes several rounds before it works, he says.

“By the time that the outbreak leveled off we had seen more than 6,000 diphtheria patients,” Kolovos says. “The risk for waterborne disease is constant and massive given the density of the population, the issues with hygiene and waste removal inside the camp. ... Access to mother and child care, especially for pregnancies and complications with pregnancies, is [also] very dangerous for many of the women."

To meet the growing need for care, Kolovos says that his organization has had to expand its operations more than tenfold in the last six months alone.

Although some were familiar with Bangladesh before becoming refugees, Kolovos says “it’s a complete strange land” for the vast majority of the Rohingya, who also enter the camp traumatized from past experiences. This trauma creates an immediate need for mental health care as well.

“So many people being displaced from their homes unprepared with such an amount of violence and also the history of persecution that they have faced and the difficulties that they are dealing with in Bangladesh,” he says. “The level of general trauma is quite high.”

Doctors Without Borders does offer counseling services in all of its facilities and has worked closely with Bangladesh’s Ministry of Health to offer additional support.

“I think that when we look at the general precariousness of where they're living and how they're living, it's difficult to meet the basic needs — including mental health,” Kolovos says.

This article is based off an interview with Tanzina Vega that aired on The Takeaway.