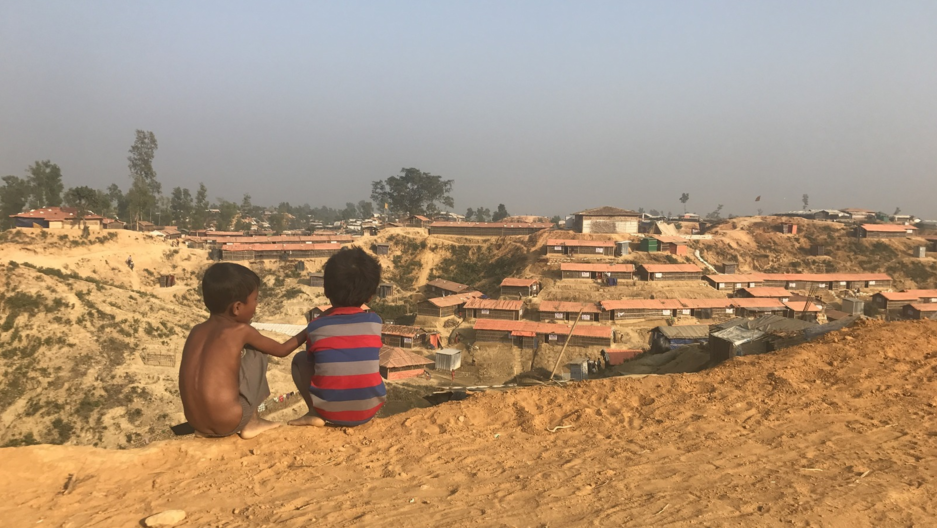 Rohingya children at a refugee camp in Bangladesh look towards dwellings built with materials in aid packages. Bangladesh is prone to cyclones and extreme flooding, and many of these homes are vulnerable to severe weather and landslides.

In the depths of Bangladesh’s Balukhali refugee camp, a large group of Rohingya men gathers atop a windy hill under the late afternoon sun. They’ve just been dropped off with their families by UNHCR — the UN’s refugee agency — as part of ongoing efforts to bring more of the 1 million-plus Rohingya refugees Bangladesh says are in the country into one massive settlement.

For months, these men have been living in huts in smaller camps closer to Bangladesh’s border with Myanmar, the country around 700,000 Rohingya have fled since a brutal military campaign against their community began in August 2017. Now they have to rebuild their lives again. There’s a feeling of both excitement and anxiety as the men hoist hefty aid packages onto their backs and shoulders — packages that contain bamboo sticks and sandbags tightly wrapped in tarpaulin, the materials that will form the basis of their new homes.

Most set off for the empty hills behind them which, like those to the left, right and straight ahead, will soon be peppered with huts for miles. But some hang back and begin to share their stories.

Bangladesh is prone to cyclones and extreme flooding. Most homes in the settlement have been built on slopes cleared of vegetation, making them particularly vulnerable to severe weather and landslides.  When the monsoon season hits in a few months, the temporary structures the refugees are erecting may stand no chance. But many refugees are so concerned with meeting their daily needs — including building any shelter at all — that the looming disaster the weather could soon cause seems abstract and far away.

An older gentleman pushes to the front. Clinging to UN-issued documents and a long walking stick, he’s clad in an oversized blazer and tall winter hat. He has just one visible bottom tooth, sharp and yellow. His brow is furrowed. His face is filled with intense worry. Something has gone terribly wrong. 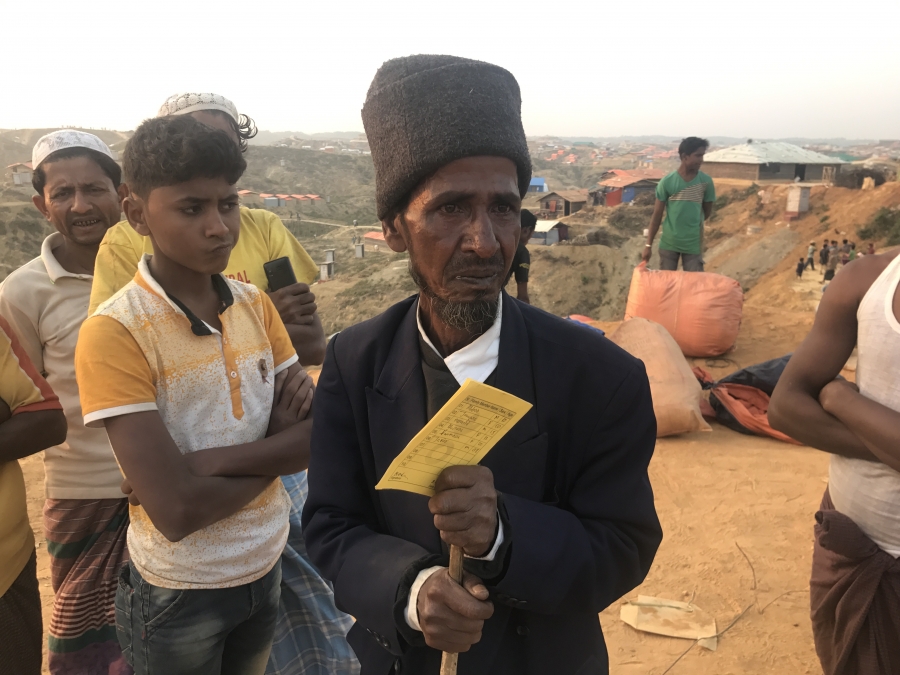 Mohammad Abbas and his family of seven had arrived in Balukhali two days earlier and had plans to work on a more permanent home, but their donated housing materials were stolen in the middle of the night.
Credit:

His name is Mohammad Abbas. He and his family of seven arrived in Balukhali two days earlier. After spending their first night in a temporary shelter for new arrivals, the family set out for the empty hills with their housing materials on the second day. That night they erected a basic tent: just two bamboo sticks and some plastic tarpaulin over their heads. Work on a more permanent home would start the next day.

Their plans were shattered, however, when they awoke the next morning. The housing materials were nowhere to be found: They’d been stolen in the dead of the night.

Abbas trekked back to the UNHCR drop-off point with his two sons, Moshid and Jafar, to search for help, leaving his wife and three daughters behind. If they can’t find a solution, Abbas knows there’s only one, miserable option.

“We will have to stay in the plastic [tarpaulin tent] like yesterday,” he laments.

His voice is breaking, yet there’s also a sense of a man slightly relieved as he explains his situation. Maybe sharing his story will make something will happen. But hope soon fades as he realizes UNHCR representatives have already left for the day.

The sun is setting, and the wind is rising. So too are Abbas’ concerns about another night of seven people crammed under a tarpaulin sheet. Time is running out, there’s not an aid worker in sight. Nobody else seems able to assist.

“Most [other] people are making their homes," he said. "They don’t have enough place for themselves. How can they help me?”

Finally, someone with some clout appears. A Rohingya refugee himself, the man is a volunteer watchman for UNHCR. But his ties to the organization are tenuous: He’s only been on the job for 13 days. The best he says he can do is take Abbas to a representative the next day.

The conversation persists. Where should Abbas and his family go? The watchman eventually relents. He knows of an empty hut nearby. He’ll take them there.

Asked how he feels now knowing where they’ll sleep for the night, Abbas’ face changes and his eyes begin to well up. He wipes away the tears with the sleeve of his blazer.

“I’m feeling good,” he says. “What people are doing for us here is always good.”

As the crowd disperses, Abbas stands as tall as he can, tightly gripping his walking stick with both hands amid the swirling wind.

Abbas’ story is, of course, just one anecdote. Other refugees — both those who have been in Balukhali-Kutupalong camp since August as well as those resettled recently — have built new homes in the settlement without the troubles he faced. But even among Rohingya who have been here awhile, many are at risk of losing everything once again: Life in Balukhali-Kutupalong could soon drastically change as the monsoon season approaches.

“Around a third of the area of the settlement could at one point be underwater, and around 100,000 people could lose their shelters if there was a flood,” said Caroline Gluck, a senior public information officer with UNHCR.

With Bangladesh’s notoriously intense annual storms just weeks away, the UN refugee agency and other humanitarian organizations have been scrambling to prepare for potential disaster. Precautions include strengthening pathways, bridges and mud stairs; sandbagging; and improving drainage systems.

Relief workers had also hoped to flatten the tops of steep hills over the past few months, but only received permission in March from the Bangladeshi government to start doing so. Such work has now begun on 123 acres of land adjacent to the existing camp that has been allotted for the relocation of Rohingya refugees from other settlements. An additional 377 acres of has also been set aside for relocation. Gluck estimates 50,000 to 60,000 people could be moved to the new land.

Meanwhile, around 350 families were recently relocated elsewhere after flooding caused by local farmers seeking to divert water from a canal to their rice paddies. Work has begun on dredging the canal to prevent future clogging and to improve its water flow ahead of the rainy season.

Despite all the best efforts of humanitarian workers to prepare, however, time is not on their side.

“We’re trying to do what we can, as quickly as we can,” Gluck said. “It is a race against time. … We have to plan for the worst and hope for the best.”

‘I cannot take any more thinking’

Raising awareness among those living in the most vulnerable positions has also been a part of the effort. But many of these people’s minds are on other issues — such as ensuring their daily survival in Bangladesh while processing the horrors they witnessed fleeing Myanmar — and not a potential catastrophe weeks or months away.

“I’ve been thinking about a lot of things for a few months. …Our lives are all about thinking. I cannot take any more thinking,” said Norangiz, who lives on top of a steep hill with her husband, Ilias, and seven children. 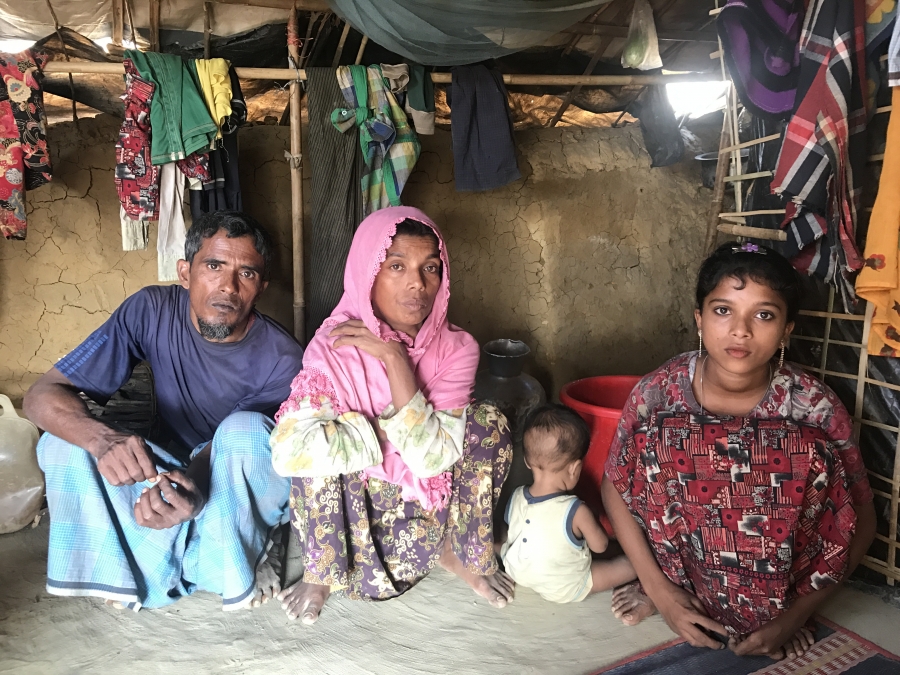 The walls of their hut already have cracks. But the peril that may await seems minor compared to what Norangiz says she saw before escaping Myanmar: children thrown into a river, people beheaded, others locked in their homes and burned alive. She says one of her daughters, 11-year-old Rojia, saw her own cousins lined up and shot by the military. The young girl still looks stunned when the topic is broached and can’t seem to find the words to describe it.

Amid these memories, Norangiz and Ilias are beginning to understand the threat the rainy season poses. But they also know that Balukhali-Kutupalong’s hilly, densely populated terrain means there aren’t many safe areas where they can move.

It’s a sentiment shared elsewhere in the camp. Upon arriving in Bangladesh six months ago, Mohammad Idris and his family of five lived on flat land near the main road outside Balukhali. After about a month, local authorities told them they had to move into the hilly settlement. Their home now sits upon a hill — possibly among the settlement’s steepest — with around 80 mud stairs carved into its side.

As Idris steps out of his home holding his youngest child, all of Balukhali-Kutupalong sprawls out beneath him. The only open flat land in sight is filled with sewage.