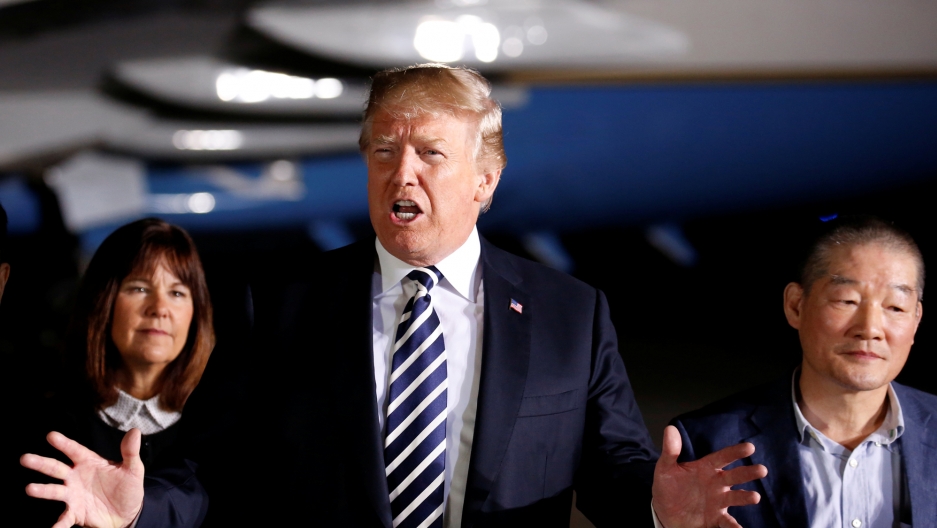 President Donald Trump talks to the media next to the Americans formerly held hostage in North Korea, upon their arrival at Joint Base Andrews, Maryland.

The date is set for June 12. And there’s already an advance team on the ground in Singapore making final preparations for a historic summit between President Donald Trump and North Korean leader, Kim Jong-un. That is, if the meeting actually takes place. The World spoke on Monday with Victor Cha, a former top adviser on North Korea to President George W. Bush, about some of the difficulties ahead of next month’s planned summit.

The World: Victor Cha, you actually have experience negotiating with the North Koreans. If you were advising President Trump at this moment, what would you be telling him?

Victor Cha: You have to stick with the game plan. Trump wants to make this summit with the North Korean leader happen, despite the hiccups that we saw last week. The North Koreans made statements that they may not even come to the meeting if they can't get agreement on denuclearization. These are bumps in the road that we should always expect with North Korea. It's never easy negotiating with them. Things that you think are agreed upon are later not agreed upon, and so no one should walk into this thinking that it is going to be smooth sailing, or that there's going to be a fairytale ending at the end of this. It's always going to be difficult. You've got to roll up your sleeves and expect all sorts of curveballs like we got last week.

According to what we've seen from President Trump, the game plan was to do a high-level meeting to try to get assurances from the North Korean leader about a commitment to denuclearization. And then, to use that to get the two negotiating parties together to implement what the leaders agreed to. It may sound a little bit idealistic or even a little bit naïve, but for 30 years we've been trying to do this without talking to the North Korean leader. And we finally have a US president that was willing to break all sorts of policy conventions and try to do diplomacy personally, and if there's one country where the leader matters in terms of making decisions, it's North Korea.

The Washington Post has a story quoting an anonymous US official saying about the North Koreans that, “it doesn't look like they want to denuclearize at all.” What do you make of that?

Well, that would be consistent with statements that the North Koreans have making through much of the previous two years, where they believe that their nuclear weapons program has been a success. Last year, they announced that they had become a successful nuclear weapons state. The North Korean game plan has always been that they wanted to achieve that capability and then be willing to negotiate a peace treaty, or normalization of relations, or even an arms control agreement with the United States — but as a nuclear weapons state. I think that the really difficult question on the US side is whether you can accept something like that, or whether you can accept it as the beginning of negotiating premise and see if you can walk the North Koreans further back from their position. That is what negotiations are for.

The North Koreans have gotten what they want, in a sense. And now, the US wants them to denuclearize. When you're bargaining, wanting something too much is a bad thing. Once the other party knows you want it badly, they're suddenly in a position of greater power. Is that what's going on here in spite of Trump's reputation as the great deal maker?

To an extent that is what’s going on here with the way the President responded with every action that the North Koreans took — and they took some significant actions over the past few weeks, where they agreed not to test anymore, they agreed to close down their nuclear test site, they said they would no longer conduct unannounced ballistic missile tests and they returned the three American hostages. They took a number of steps. And President Trump really played those up, which had the impact of increasing expectations of this summit meeting. Then came the announcement by the North Koreans last week saying they may not come. Now, expectations for the summit all of a sudden have dropped. I think at this point the President should probably stay quiet, and not tweet, and he should focus on allowing Secretary of State Mike Pompeo and his team to try to negotiate some real policy deliverables for the summit.

On Tuesday, South Korea's president Moon Jae-in is going to meet with Trump in Washington. What's that conversation going to sound like do you think?

I think probably within the last 72 hours, what they had planned to do during this meeting has changed drastically. Initially, it was probably the idea that the South Korean president would help Trump prepare for his meeting with Kim. On April 27, North and South Korean leaders had lots of discussions about the US-North Korea summit, but now Moon is probably coming here very concerned and wanting to make sure he can salvage this.

This meeting on June 12, if it's not postponed, is about averting a potential nuclear conflict. So, that has to be a good thing, right? But what could possibly go wrong?

The thing about doing summits like this at the very beginning of a process is that if the summit fails, you really have no place to go in terms of diplomacy. The summit is the very top level. It is the very pinnacle of diplomacy. If it fails, the only thing after a summit is a cliff. I don't think anybody wants that to happen. If this meeting goes forward and as we get closer to it, I think all sides will realize they have much more vested in a successful meeting, or at least one that doesn't fail. In that sense, there's quite a bit at stake. And I think all sides realize that. But the North Koreans know that too, and they will leverage that to their advantage in the days to come before June 12.

Do you wish you were working on preparations for this summit from inside government, and more broadly, working on what's happening right now with North Korea?

I've been studying this issue and working on it for over 30 years. I invested three years of my life along with colleagues of mine in negotiations that led to agreements with North Korea 10 years ago. So, I think I've done my part. But I am certainly happy to provide advice when asked for it.

Are you sort of rubbing your eyes though, almost in disbelief, at how fast this has all transpired under Trump?

Yes and no. I think up until last week, things were moving at an incredibly fast pace. Many people thought we were headed for a historic moment. But I think in the last week, there's been a lot of dampened expectations, and a more sober outlook that fit more with the way we've thought about this problem in the past. I think while things were moving fast, from now on it's going to look more like what we've seen in the past. The big difference being that you have a US president that is willing to talk directly to the North Korean leader, which we've never had before in the past.

If this were poker, one might say that Trump went all-in too soon. Do you agree with that assessment and if so, how do you walk back and still have a strong hand?

It's a good question, and I think you're right. He did go all-in. But that's the only way he does things. And we don't know enough about the North Korean leader and his willingness to do more for a deal. I mean, that's the way I would describe it. It appears to me at least that Trump does not want to do an incremental tit-for-tat type of deal. "I do this, you do that," over the next 10 years type of thing. That invariably gets slowed down, if not canceled by concerns about cheating. I think he wants the big bang deal, which is leader-to-leader, "I give you all of this, and you give me all of that, and we'll let our people work it up." It's a very, very different approach. And it could succeed spectacularly, or it could fail spectacularly on that latter scenario.

What happens if it does fail spectacularly? What's left for the White House to pursue?

Unfortunately, I think that puts us near where we were in all of 2017, with a great deal of talk about military action, lots of military exercises in the region, North Korean threats to incinerate US cities, and the president’s threats to rain “fire and fury” on the North Korean regime. Nobody wants to be there, obviously. And for that reason, even though we've had hiccups in the path to June 12, I think everybody agrees that getting to the summit is better than going back to the things we were seeing in 2017.

Victor Cha is currently at the School of Foreign Service at Georgetown University. This interview was edited and condensed for clarity.