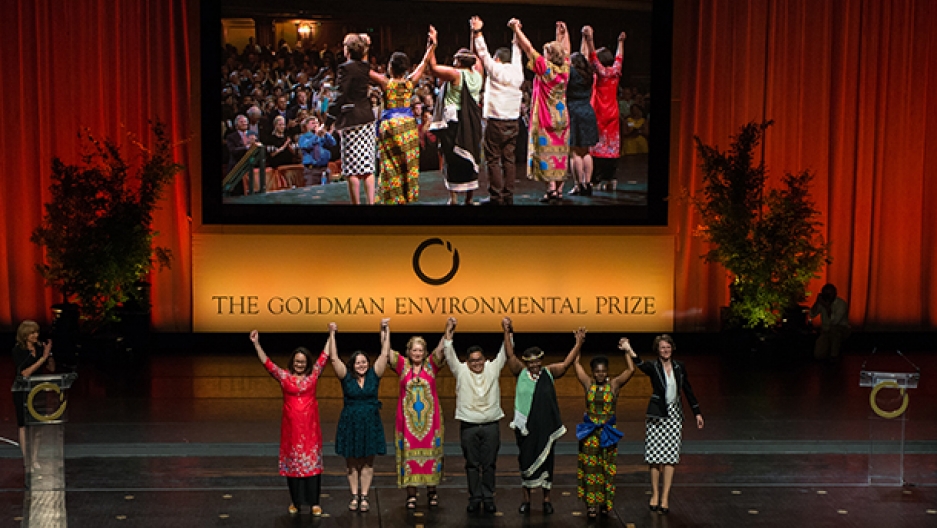 The 2018 Goldman Environmental Prize Recipients accept their awards at a ceremony April 23 in San Francisco.

Two grassroots heroes who defended their environments against powerful industries are among the seven recipients of the 2018 Goldman Environmental Prize.

They are Claire Nouvian, a French marine life advocate who advocated relentlessly for a more sustainable fishing policy in the European Union; and Manny Calonzo of the Philippines, who pushed his country to ban paint containing the neurotoxin lead.

The prize recognizes individuals who have stood up to vested interests, corruption, industry bullying and political repression to protect the environment and their communities. It is awarded to activists in each inhabited region of the world.

Nouvian helped lead a movement to end France’s practice of deep-sea bottom trawling, a destructive type of fishing in which giant nets drag along the sea floor.

“It is absolutely not selective. The nets take and pick up anything in their wake,” Nouvian explains. “So, you can imagine that after deep-sea bottom trawling has gone anywhere, there is pretty much nothing left.”

Bottom trawling destroys anything on the sea floor, including vulnerable and ancient forms of life, Nouvian says. “There are animals in the deep sea, such as corals, that can live thousands of years. A single fishing net can come and destroy life that took thousands of years to grow. It makes absolutely no sense," she says.

In 2005, Nouvian founded her own nonprofit organization called Bloom, a name meant to convey the message that the world is at a tipping point. “If we do the right things, we should have very positive blooms in the ocean of nutrients that nourish life,” she explains. “But if we do the wrong things, then the blooms we get are algae, seaweed and gelatinous things that will invade the ocean. … We’ve got a few years, maybe a few decades, no more, to fix the damage we've created.”

As France continued to block any efforts to end deep-sea bottom trawling, Bloom focused instead on changing the fishing practices of the French supermarket chain Intermarché, which is part of a widely-known retailer. After a couple years of discussion and negotiations led to nowhere, Nouvian decided to “get a little nastier” and started to investigate the company’s business model.

Nobody had looked into the economic performance of these fishing practices, Bloom says. So she obtained the financial accounts of deep-sea fishing fleets and found, to her surprise, that they were all “pretty much unprofitable, despite receiving very large amounts of public subsidies.”

“So, we’ve got our own taxpayers' money going into feeding the destruction of the natural world,” she says. “The most vulnerable marine ecosystems were destroyed [using] taxpayers' money.”

After an extensive campaign, France banned all deep-sea trawling below a depth of 2,600 feet, which Nouvian calls a “huge success.”

“It was a collective win,” she says.

Bloom received help from Pew Charitable Trusts and a few individuals, including Professor Les Watling from the University of Hawaii, who was instrumental in providing data, and Matthew Gianni, a former commercial fisherman from the US.

Meanwhile, Calonzo won the 2018 Goldman Prize in the Islands Nations category. He is the former president of the EcoWaste coalition, which envisions a zero-waste Philippines by 2020. He was recognized for spearheading a campaign to eradicate lead paint from the Philippines and has set his sights on tackling the issue in other developing countries.

“Before we started our campaign, we had no understanding that paints being sold in the country contained high concentrations of lead,” Calonzo says. “It was only after we conducted our first study way back in 2008 that we realized it was a huge problem.”

Lead paint has been banned in US since the late 1970s. But in many developing countries, it is still widely produced, distributed, sold and used, Calonzo says. When he and his colleagues read studies from the US about children being poisoned because of their exposure to lead, they realized it must be equally bad for Filipino children. In the Philippines, however, conducting blood lead tests, especially in children, is uncommon, so it was difficult to ascertain whether a child's blood was contaminated with lead.

Calonzo says his group conducted a brand survey in paint stores to determine which brands and colors were being purchased. They prepared samples and sent them to a laboratory for analysis. In most cases, brightly colored, solvent-based paints contain high lead concentrations, he points out. They found dangerous concentrations of lead content in most of these paints — sometimes 10,000 to 100,000 parts per million, when the threshold limit for safety is just 90 parts per million.

In their most recent study, done in 2017, they were relieved to find that the percentage of paints containing high lead concentrations had significantly dropped.

“This was the result of our constructive relationship with all the stakeholders, from the government, the paint industry, civil society, the healthcare sector and academia,” Calonzo says. “We have established a good rapport with the Philippine Association of Paint Manufacturers. We managed to agree on several important points, and one of them is that lead has to be removed from paint formulations in order to protect children's health.”

The Philippines has now completed a three-year phase-out period for lead paint used in homes, schools, daycare centers, playgrounds and other locations, Calonzo says. By 2020, they hope the Philippine market will be entirely free of all lead-containing paints.

Other winners of this year's Goldman prize were Khanh Nguy Thi of Vietnam; LeeAnne Walters of the United States; Francia Márquez of Colombia; and Makoma Lekalakala and Liz McDaid of South Africa.