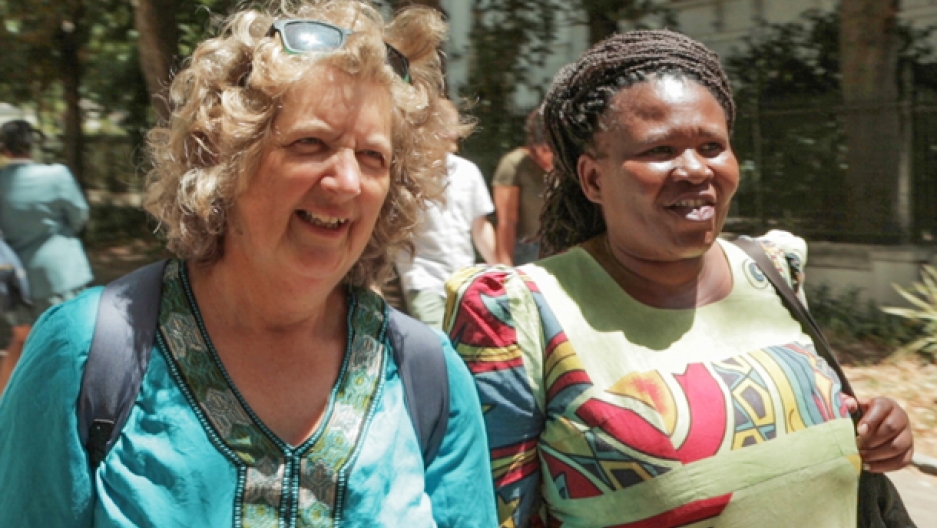 Liz McDaid and Makoma Lekalakala, longtime community activists and friends, are two of the winners of the 2018 Goldman Environmental Prize, awarded to environmental activists from around the world.

Two women from South Africa who joined forces to stop a secret nuclear power deal between South Africa and Russia are among the seven recipients of this year’s Goldman Environmental Prize.

The prize recognizes individuals who have stood up to vested interests, corruption, industry bullying and political repression to protect their communities and the environment. It is awarded to activists in each inhabited region of the world.

The winners from Africa were Makoma Lekalakala and Liz McDaid, longtime community activists. An illegal nuclear deal that was crafted behind closed doors eventually stalled because the two women launched a lawsuit that blocked the $76 billion project on the grounds of improper collusion.

“This was something that should have never happened,” Lekalakala says. “Our government should have never signed that intergovernmental agreement. We come from a past where we fought so hard to bring about the democratic dispensation that we live in. If things that we [fought] against can still happen within the democratic dispensation, that is wrong.”

In South Africa, Lekalakala points out, many people sacrificed their lives in the fight for good governance and to be part of the decision-making process. Moreover, the Bill of Rights of South Africa enshrines the idea that “everyone has the right to live in an environment that is safe for their being and you also have an obligation to ensure that you protect the environment.”

“We're a very unequal society and suddenly we were being asked to pay for a project that nobody wanted,” McDaid adds. “When you start talking about livelihoods, social needs, education — all of that that would be swept away if the government indebted itself to a foreign government to the tune of what is one trillion rand, which would be the equivalent of the annual budget of the country.”

Some believe that former President Jacob Zuma, who was recently forced to step down amidst corruption charges, either made money on the deal or arranged it in part to enrich his friends, McDaid says.

“As we were challenging this nuclear deal, more and more started to emerge about state capture, and certainly when we look at who benefited, [based on] some of the preparatory contracts that were awarded, it was friends of the president,” she explains. “It seemed that his presidency was associated with a very hard push to try and get this nuclear deal through against the wishes of civil society.”

Lekalakala says their main role was to explain to people what the intergovernmental agreement said and why they were filing a court case against the president, the Department of Environment, and the national energy regulator of South Africa — though at first, they didn’t want to go to court.

“All we wanted was to have engagement with the bureaucrats within the government departments,” she explains. “We wanted to understand, to have a dialogue, a discussion, so that we could come to a common understanding But, unfortunately, that was not open to us. So, we had protests, we wrote petitions, we had demonstrations, we had marches. In Johannesburg, we had continuous pickets at the Department of Energy. It was a multi-pronged strategy.”

Both women say the country must move toward a future based on renewable energy, like wind and solar, rather than coal and nuclear power, which they say are outdated technologies. “When you think of what resources we have, in terms of one of the highest solar resources in the world, and think of the trends globally and start looking at where nuclear is going, it seems to us that this is another instance of attempts to dump outdated technology onto the developing world,” McDaid says.

Lekalakal and McDaid say millions of South Africans would benefit from a decentralized electricity system run on renewables resources, but there is no political will to create such a system, even though the government has made a commitment internationally to reduce greenhouse gases.

In the end, the High Court in the Western Cape ruled in the plaintiffs' favor. “The court found that the government had acted completely illegally on a number of fronts,” McDaid says. “So, they pushed the reset button and said, ‘No, all of this is off the table.’” The government declined to appeal the case to a higher court.

McDaid believes the decision sends a strong signal to those who lobby for illegal and corrupt deals that “the judiciary is standing firm,” she adds. “We hope that the new presidency will uphold that process of the law. For us, I think it was a victory. We felt good that we had achieved this because we would like to see a legacy of a just energy transition and good governance. That's what we were fighting for.”

Other winners of this year's Goldman prize were Khanh Nguy Thi of Vietnam; Claire Nouvian of France; Manny Calonzo of the Philippines; LeeAnne Walters of the United States; and Francia Márquez of Colombia.