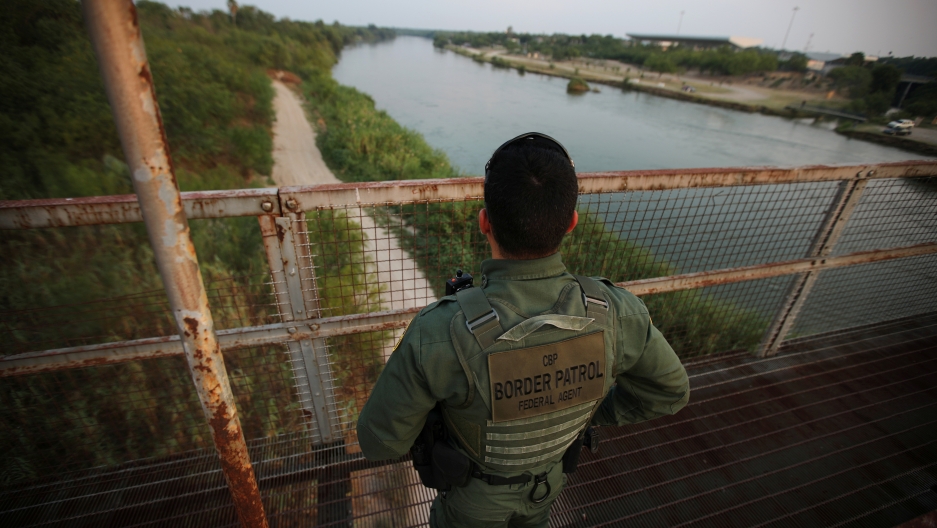 A US border patrol agent looks over the Rio Grande river at the border between United States and Mexico, in Roma, Texas in 2017. A new policy announced by Attorney General Jeff Sessions says that anyone crossing the river, or the border between ports of entry, will be charged with a crime, even if they are seeking asylum.

It was the middle of April when they showed up at the border, covered in mud. Ana, eight months pregnant, accompanied by her 4-year-old daughter, had just crossed the Rio Grande into Texas.

“We didn’t have shoes on, we stood there in our socks,” she says.

When they saw border patrol agents, they turned themselves in and were placed in detention while authorities contacted Ana’s aunt in Connecticut. The next day, Ana says that she and her daughter were released on the condition that Ana check in with immigration officials regularly while waiting for her court dates.

Ana is not her real name. While she showed PRI the documents she received from the government and gave many details about her life, she asked not to be identified because she fears for her family’s safety, and because her legal case is pending.

It took three days to get from the Rio Grande to Connecticut by bus. Ana says her daughter would often lean into her full belly and whisper, “Wait baby, wait until we get to auntie’s house. Don’t come yet.”

A pregnant migrant and her child, afraid to return to Honduras, are released from detention at the border and allowed to remain in the US under supervision while they wait to see a judge. It is a familiar story — and a practice, now spanning several presidents’ administrations, that has allowed people crossing the border without authorization to attend court proceedings from outside a detention center.

But it is a practice that President Donald Trump and Attorney General Jeff Sessions condemn. On May 7, a week after about 200 migrants from Central America arrived at the border in Tijuana, Mexico, Sessions held a news conference in front of the border fence near San Diego. 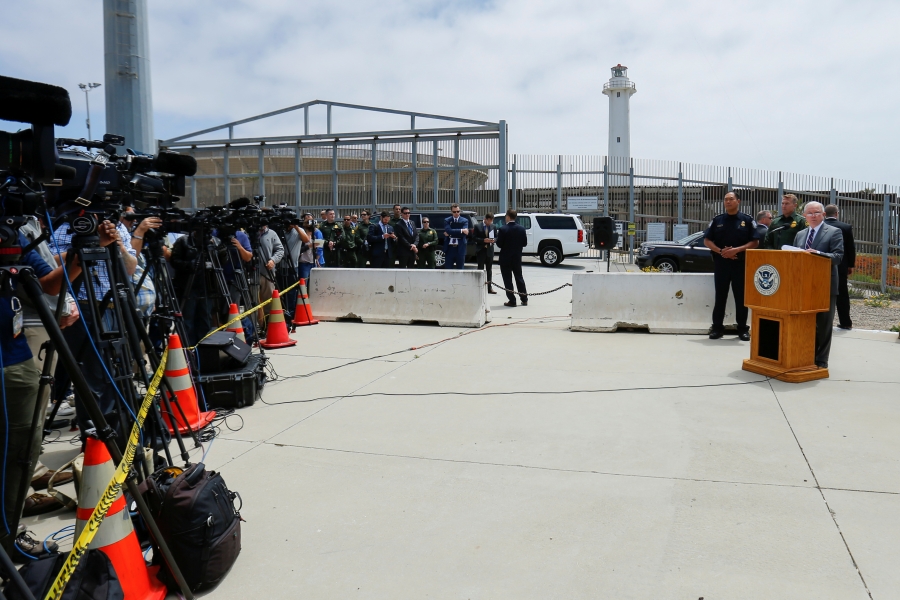 US Attorney General Jeff Sessions holds a news conference next to the US-Mexico border wall near San Diego, California, on May 7, 2018. He said that he is instructing immigration authorities to refer anyone who crosses the border between checkpoints to the Justice Department for prosecution.

The Immigration and Naturalization Act allows migrants to ask for asylum, whether they entered through a port of entry or not.

A Department of Homeland Security (DHS) spokesperson told PRI by email that the new orders mean anyone crossing the border between checkpoints will be prosecuted, including those fleeing violence or who ultimately seek asylum.

“It’s the wrong answer to the problem,” says Doris Meissner, a former commissioner of the US Immigration and Naturalization Service (INS) during the Bill Clinton administration.

The INS handled immigration issues before DHS was created in 2002. “It is certainly an issue at the border that people are coming from Central America, but they are coming from Central America for reasons of violence and persecution,” said Meissner. “We now have in the Trump administration an approach which is completely centered on law enforcement objectives with very little consideration to fairness and to the legitimacy of some of the asylum claims.”

Yet, in key ways, the Trump administration is leaning on laws passed by Congress and signed into law by Clinton in 1996. Two laws, the Antiterrorism and Effective Death Penalty Act and the Illegal Immigration and Immigrant Responsibility Act, toughened immigration enforcement. They made more people deportable and deportations in the years after 1996 skyrocketed. It also put more immigrants in detention, even for small crimes.

“I certainly regret the fact that Donald Trump is president, “ says Meissner. “I think that his approaches toward immigration are not in the best interest of us as a country.” She says the executive branch is guided by laws that Congress passed, but has some discretion about how to implement them.

“I am very uncomfortable with the approach that the Trump administration is taking. But I don’t feel any responsibility for it. The choices that they are making are very different choices from those I made and that the Clinton administration made.”

Meissner says Ana’s case is part of a “refugee flow” not an “economic migrant flow.”

“She may wait years for a hearing,” says Meissner, now a senior fellow at the Migration Policy Institute, a nonpartisan center in Washington, DC. “The immigration courts are extremely backlogged and that is the problem in the system.”

This administration is not distinguishing between potential asylum seekers and economic immigrants, says Pasquale Lombardo, an immigration attorney who has been advising some of the migrants who travelled with the Central American caravan. Lombardo say it has always been difficult to get asylum for fear of gang violence, but now, DHS prosecutors are becoming more aggressive no matter why someone enters the US without authorization.

“If you’re encountered, you are a priority. And they will arrest you. And put you in deportation proceedings,” he says.

Ana says that in Honduras she was threatened. Her younger brother refused to join a gang, so a gang member demanded that she pay them off or be killed. She knew the threats were real. Ana worked in forensics in one of the most dangerous areas of the country. She says she saw bodies wrapped in canvas on the streets.

Terrified — and pregnant with her second child — Ana, her boyfriend and daughter, with about US$100, headed north to Mexico. They ran into something unexpected.

A caravan of migrants, hundreds of them, were also heading north with activists to raise awareness of the violence and poverty Central Americans are fleeing. They wanted the US to see how dangerous their journey can be.

Ana and her family joined the group. Then, Trump weighed in. He posted a demand on Twitter, that the Mexican government stop the caravan.

“Mexico has the absolute power not to let these large ‘caravans’ of people enter their country. They must stop them at their Northern Border,” he wrote in a barrage of tweets on April 2.

Alex Mensing, an organizer with the non-profit Pueblos Sin Fronteras, watched in amazement. “I think I didn’t personally realize a tweet from Donald Trump would sort of skyrocket the caravan into the media like it did.”

Mensing says, on one hand, he saw this as a teachable moment, a chance to educate the American public about the crisis in Central America. But he also says the president’s tweets put a lot of pressure on the migrants.

“There was a lot of uncertainty about whether the caravan would continue,” he says.

The caravan slowed down and Ana, approaching her ninth month of pregnancy, decided with her family to leave the group and take buses north. Things went smoothly until they reached the border near Texas. They arrived at night and as soon as they got off the bus, she says, a man grabbed her daughter’s hand. Ana says cartel members took them and other Central American migrants hostage.

Even if she had known about the importance of presenting herself at a port of entry in order to ask for asylum, Ana had no say in where her captors dropped them off. At the banks of the Rio Grande, the kidnappers ordered them both to strip down to their underwear, wade up to a makeshift raft and hop on. Midway across the river, the raft capsized. Stunned, Ana says she and her daughter swam to the other side and walked for about half an hour. A Border Patrol van approached them. Ana did not know to ask for asylum or say she was in danger back home.

And, she says, no one asked. 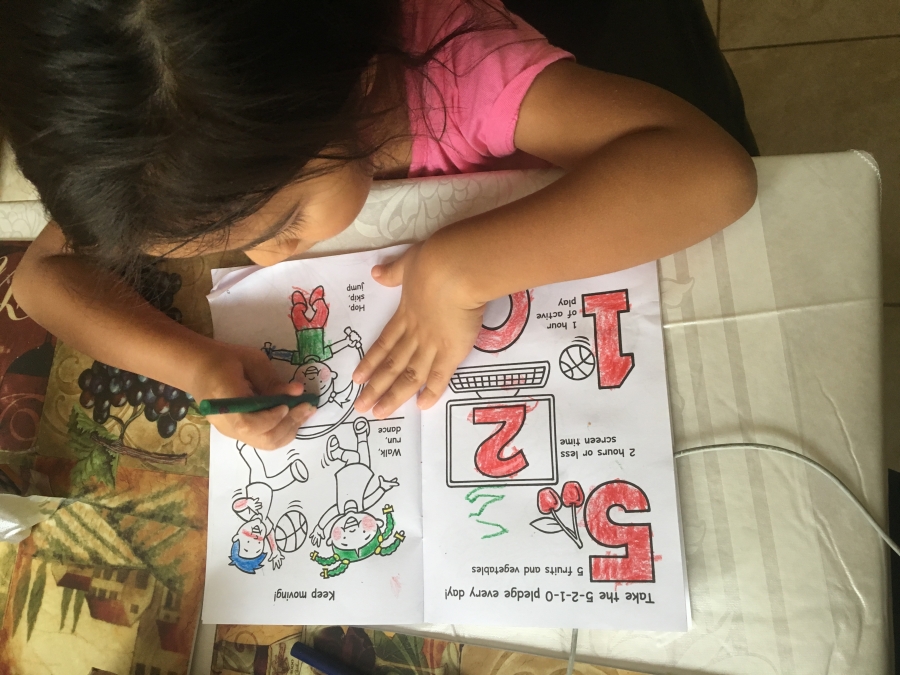 On a Friday in May, 2018 Ana and her daughter wait for an immigration officer to arrive and scan her ankle monitor. She is one of millions of people who are under Immigration and Customs Enforcement supervision.

A month later, Ana is in Connecticut at her aunt’s house. As she promised, after giving birth, she checked in with the local immigration office. They put an electronic ankle monitor on her. She has no court date yet, and no lawyer.

“Do you think the baby looks like his father?” she asks.

It’s an old house with few windows and the kitchen is hot in the early summer sun. Ana pulls out a picture of a handsome young man, her boyfriend and the father of her child. She’s unsure where he is right now. She also shows me a little map that an immigration official gave her of where she can move freely: Connecticut, New York, New Jersey.

Immigration officials told Ana that they would come to her home every Friday to scan her ankle bracelet. So on one Friday in May, she waits for the visit. She serves her daughter Fruit Loops, plays tic-tac-toe and watches daytime television. Time moves slowly, pierced by the occasional wail of her newborn or her toddler throwing a tantrum.

For the most part, nothing happens. She just waits.

A spokesperson for DHS told PRI the agency has seen more people enter the US on the southern border. Customs and Border Protection reports that it apprehended about 75,000 people crossing the border in March and April 2018; almost 27,000 of them were traveling in families or were children traveling alone.

Arresting and prosecuting all of these people is putting a strain on the system. The Los Angeles Times reports that the “zero-tolerance” policy has already led to  federal courts packed with people charged with crimes. Immigration agencies, which oversight bodies already say are stretched too thin, will also feel the crush.

The Boston field office for Immigration and Customs Enforcement handles cases in Connecticut. They did not return requests from comment on their caseload. But in 2017, DHS reported to Congress that the agency monitors 53,000 people every day as an alternative to detention. There are more than 2 million people being supervised by the department; in 2017, a spokesperson told PRI there were about 6,000 agents to do so.

After eight hours of waiting, no one shows up at Ana’s aunt’s house. She breaks down and pounds the table.

“He wanted to do this for us,” Ana sobs. “Not even for himself. For the kids. And look where we are now.”

She pulls herself together, rubs the skin under her ankle monitor and takes another look down the street.