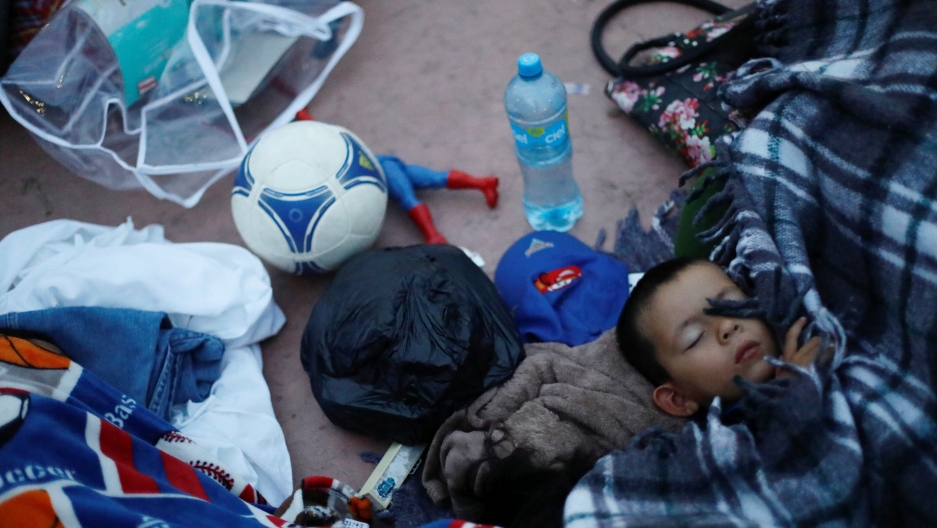 A child traveling with a caravan of migrants from Central America sleeps near the San Ysidro checkpoint after a small group of fellow migrants entered the United States border and customs facility, where they are expected to apply for asylum, in Tijuana, Mexico, April 30, 2018.

After weeks of travel across Mexico by bus, freight train and foot, more than 150 migrants from Central America — part of a caravan that has gained international attention — confronted an uncertain wait at the US-Mexico border.

US Customs and Border Protection (CBP) officials informed them that they did not have the capacity to process their requests to seek asylum in the United States.

That wait, and it is uncertain how long it will last, left the migrants shivering and huddled on a cold sidewalk in Tijuana, Mexico, just outside the San Ysidro port of entry. None had mattresses or tents. As of last night, only a few had blankets. Humanitarian groups from both Mexico and the US quickly begun issuing requests for donated food and blankets.

The #MigrantCaravan is hunkered down for the night by the Ped West port of entry, sleeping on the Tijuana sidewalk in the cold. Saw some shivering kids (+/-70-80 of em.) They plan to try enter the US & request asylum again tomorrow. pic.twitter.com/DdRqEf9Aib

“I followed this on Instagram,” said Kristine Lopez, who traveled to Tijuana from California to distribute used jackets and sweaters to children. “These are all the clothes I had in my garage. We just loaded stuff from home into our car and we came, and brought them for all the kids.”

On the US side of the border, some people have volunteered to offer their homes to the migrants seeking asylum.

Earlier on Sunday, some of the migrants participated in a rally at a part of the border where the fence descends into the sea at Tijuana’s city beach. After, the group planned to turn themselves in, one by one, to border officials. That did not happen. In a statement, CBP Commissioner Kevin McAleenan said: “As sufficient space and resources become available, CBP officers will be able to take additional individuals into the port for processing."

No timeframe was offered.

Nicole Ramos, a volunteer lawyer with the immigration services non-profit Al Otro Lado, was outraged. “There is space for 316 people at the port of entry,” Ramos said. “It's unclear why the American government, which is the most powerful governments in the world, did not have sufficient time to prepare for the arrival of refugees.”

CPB had known about the group of migrants making its way to the border for weeks, she said. Local news outlets have reported the agency has the capacity to detain up to 300 people at a time.

In tweets, President Donald Trump framed the groups of migrants as a threat and a “disgrace."

“It's cold, children are sick. We have women who are pregnant, we have people who don't have sufficient clothes for the weather,” Ramos said. “There isn't sufficient food to feed the group. The United States government is creating a humanitarian crisis.''

Bronchitis and pneumonia have plagued the caravan’s youngest members, and many toddlers have hacking coughs.

It is unclear what comes next, if the migrants will continue to remain camped out at the port of entry or retreat to the handful of Tijuana-based migrant shelters.

Erika Guevara-Rosas, Americas director at Amnesty International, noted that seeking asylum is a human right, not a crime.

Under US asylum law, people have the right to seek asylum, a protection increasingly sought by Guatemalans, Salvadorans and Hondurans, according to the Washington Office on Latin America.

Last May, a similar, albeit smaller, group of migrants, about 80 people, arrived at the border. Among them, Ramos said, some cases have still not yet been decided. Four of the people in that earlier group, she says, have won asylum so far.