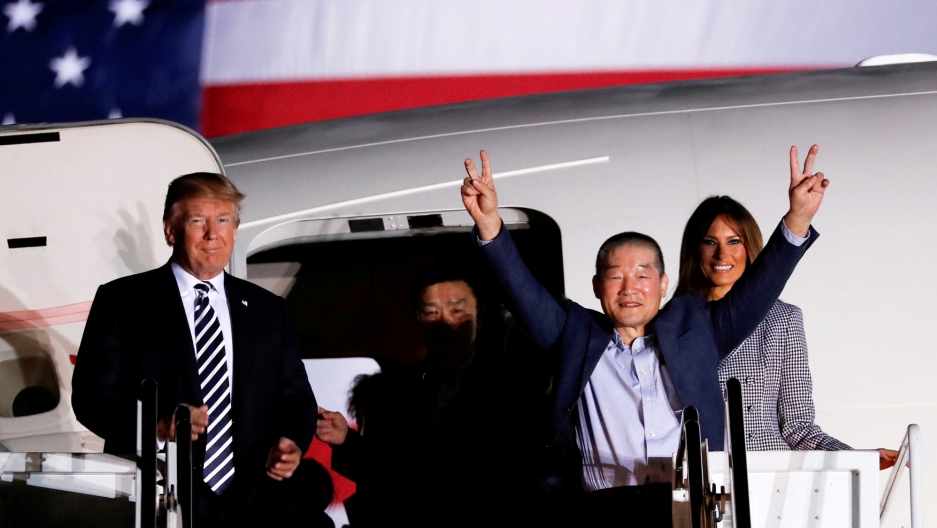 One of the Americans formerly held hostage in North Korea gestures next to US President Donald Trump and first lady Melania Trump, upon their arrival at Joint Base Andrews, Maryland, in the middle of the night. Families of those being held in Iran worry that the US's withdrawal from the Iran nuclear agreement will shut off an important diplomatic channel to negotiate releases.
Credit:

In some ways, it was a relief for Hua Qu when President Donald Trump announced the United States’ withdrawal from the Iran nuclear deal. She had been closely watching the news.

“To wait for his speech, to wait for that uncertainty to fall down on the ground, to be settled so that I can think through what I can do going forward,” Qu says.

Qu’s husband, Xiyue Wang, has been imprisoned in Iran for nearly two years. He’s an American citizen and a graduate student at Princeton. He was doing archival research in Tehran when he was arrested and charged with espionage. He was sentenced to 10 years in prison. 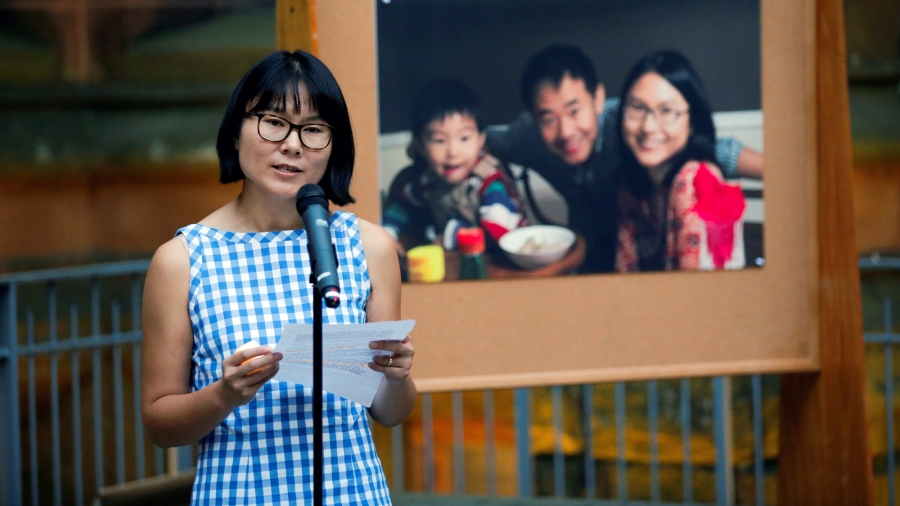 Hua Qu speaks to people as they attend a vigil for Xiyue Wang at Princeton University in Princeton, New Jersey on Sept. 15, 2017. Her husband, Xiyue, has been imprisoned in Iran for two years.

“It’s very worrisome. He’s still doing badly there,” Qu says. “He’s in a half-underground, overcrowded cell, which is heavily infested by bed bugs, so it is very difficult for him.”

Qu says it’s also difficult for her and her 5-year-old son.

“I can see that my son has been affected by this,” she says. “It is extremely difficult for me to still be composed, to be a single working mother and at the same time be the campaign manager for my husband’s case.”

Related: The wife of a Princeton scholar imprisoned in Iran worries about the fate of the Iran nuclear deal

According to the advocacy group Center for Human Rights in Iran, Xiyue Wang is one of five US citizens being imprisoned in Iran. A sixth US citizen, a former CIA agent, is also missing.

As part of the Iran nuclear deal, diplomats from Europe, China, Russia, the US and Iran would meet every three months. Family members of American citizens imprisoned in Iran viewed these quarterly meetings as a chance for their loved ones to be discussed and possibly freed.

Now, that major diplomatic channel to Iran has been closed and it’s unclear if or how negotiations will proceed for the prisoners’ release.

“My deep concern is that by withdrawing from the nuclear deal, we’re leaving them behind,” says Jason Rezaian, a global opinions writer for The Washington Post.

Rezaian spent 544 days imprisoned in Iran and was released in a prisoner swap in January 2016. He says we need to get more comfortable calling these cases hostage takings. 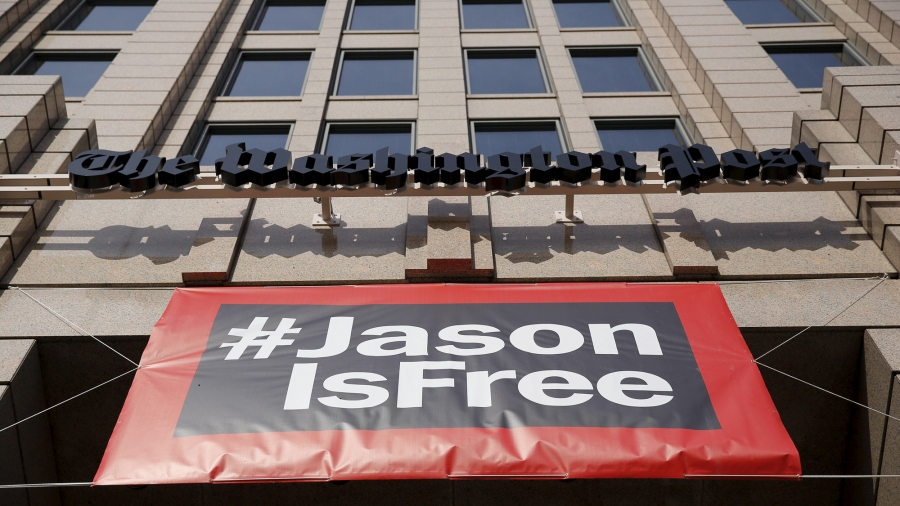 A #JasonIsFree banner hangs from the entrance of the Washington Post during the grand opening of the paper's newsroom in Washington, DC, Jan. 28, 2016. Reporter Jason Rezaian was released after 18 months in prison in Iran.

“The onus is on the Iranian regime for doing that. At the same time, the American administration, whichever American administration is in power, has a responsibility to protect and to help its citizens abroad and this is one of those situations where I don’t see it being as much of a conversation … as it was, for example, when I was being detained by Iran,” says Razaian. “I mean, it became a part of the Republican talking points for months. That, you know, you can’t enter into this deal while Americans are still being held there. Well, you shouldn’t exit that same deal while Americans are still there.”

At a press conference Wednesday in Washington, DC, Baback Namazi, a relative of two of the Americans imprisoned in Iran, said he met with two high-level White House officials Wednesday morning to talk about his brother and father. He said he was assured that his family and the other detained Americans are being treated as a high priority. He also said he’s thrilled for the families of the three Americans who were released from North Korea yesterday, but he’s crushed his own brother and father aren’t also free.

Hua Qu says she’s also happy for the families of the freed prisoners from North Korea.

“It is very encouraging,” Qu says, noting that President Trump brought the North Koreans to the bargaining table, “which normal, conventional diplomats may not be able to do. So, I really hope there will be a breakthrough in my husband’s case. I really need him to come back to support me.”

From Evin prison in Tehran, Wang is allowed to make regular phone calls to Qu. When he called Wednesday morning, Qu told him about the men released from North Korea. She says the news made them both cry.