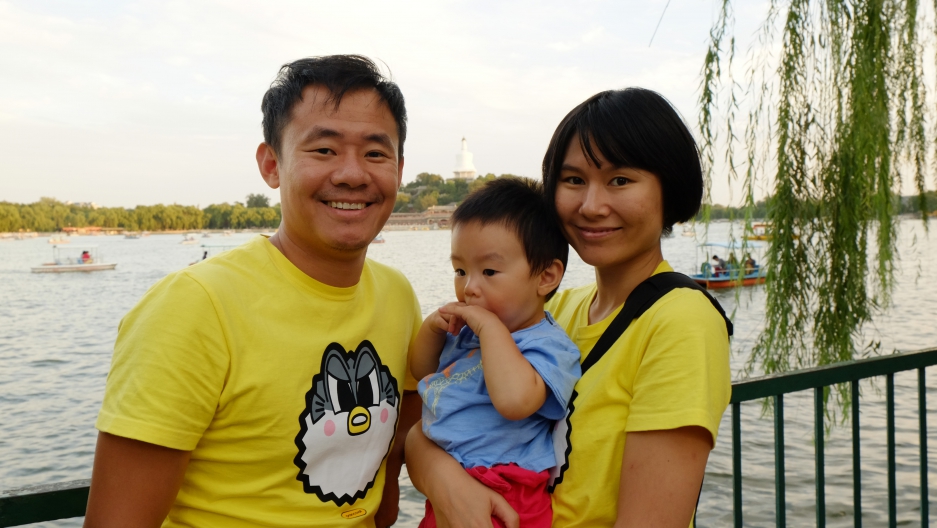 Xiyue Wang and Hua Qu with their son. Wang has been in prison in Iran for more than a year.

Hua Qu has not seen her husband, Xiyue Wang, since April 2016, when Wang left for Iran. He was doing research in Iranian archives for his dissertation. Wang, 36, is a PhD candidate at Princeton studying Eurasian history.

On the day before he was scheduled to return home to New Jersey, authorities in Tehran asked him to turn over his laptop and passport. Qu says he was interrogated but allowed to move freely. Three weeks later, Wang called and told his wife he’d been ordered to leave Iran immediately.

“He said I will purchase a ticket now and will call you back when I get to the airport,” Qu says. “So I waited three hours or so. I didn’t receive his call so I sent a text message checking to see if he was okay, but that text message went unanswered.”

Administrators at Princeton hired an Iranian lawyer, who confirmed that Wang was being detained in Iran’s Evin prison.

Qu said after she learned that, she became obsessed with Google Earth. She would zoom in on the prison as if she could find him behind the walls.

Eighteen days passed before Qu heard from her husband again. During a phone call, Wang told her he had been in solitary confinement. These days, he’s allowed to call her regularly, and they talk for about 10 minutes at a time. Qu says she mostly tries to comfort him.

“Sometimes the conversation is really difficult. If he’s sick he will describe his symptoms to me and he will mention his frustrations, his depression,” Qu says.

Wang’s health is deteriorating. Qu says he has painful arthritis in both of his knees.

Qu was afraid she would hurt her husband’s chances for release if she spoke publicly about his detention so for more than a year she kept quiet. But in July, Iran went public. A spokesman for Iran’s judiciary announced in a press briefing that Wang had been sentenced to 10 years in prison for espionage. The verdict was upheld on appeal in August.

Qu says she now feels it’s important to speak out so that people know her husband is more than a political pawn.

“My husband, a student and a scholar, a husband and father. This is totally a political situation,” she says. “It’s nothing about my husband’s activities in Tehran … for his research.”

It’s not the first time that a US citizen has been detained in Iran and accused of spying. A United Nations panel this week called for the release of two Iranian Americans, Siamak Namazi and his father Baquer Namazi, who are also serving 10-year sentences on charges of espionage.

At a vigil at Princeton on Sept. 15, friends and colleagues told stories about Wang, about how he’s a “language nerd” — he speaks nine languages, including Hindi, Urdu, Russian and Farsi. He even worked one summer translating Pashto into English and French for the Red Cross in Afghanistan.

When Wang left for Iran, his son was 2 years old. Qu says their son used to point at planes and helicopters and say his dad was in them, coming home. But he doesn’t do that anymore. One time when Wang called, Qu gave the phone to her son.

“And he just directly said, ‘Why you still doesn’t come back? When are you coming back?’” Qu says. “So it’s really heartbreaking for my husband.”

She says she even struggles to picture him in her head now.

“My husband, he describes to me that he looks old, and there are many wrinkles on his face and many gray hairs. His back is not straight anymore and he cannot walk properly,” Qu says. “When I put … together what he described of himself in an image, I don’t think that is my husband.”

She says she’s in regular contact with the US State Department, which has called for his release. And she follows the news closely, especially coverage of the Iran nuclear deal. It worries her.

“The Iran-US relationship is getting worse and worse, and he is detained because of his American citizen[ship],” she says.

Wang is a naturalized American, born in China. Qu hopes the Iranian government will take into account the friendship between China and Iran. But she says Chinese officials have told her they can’t help her husband in any official capacity because Wang is no longer a Chinese citizen. Qu is a Chinese citizen, though, and Chinese officials have offered her support if she chooses to visit him in Iran.

For now, she and Wang are hoping that progress can be made toward his release at the United Nations General Assembly this week in New York.