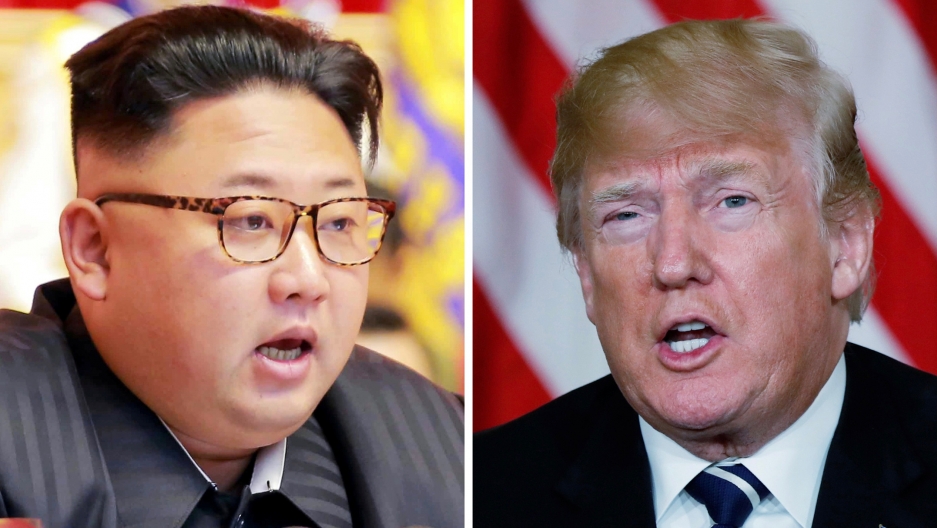 Now that the two Koreas have made history, it’s Donald Trump’s turn.

If Trump sits down to meet Kim Jong-un as expected, he will be the first American president to hold a face-to-face meeting with a leader of the Democratic People’s Republic of Korea.

But if a Trump-Kim summit has a chance of going down in the history books as anything like a success, both sides have some big decisions to make.

Denuclearization is priority No. 1.

The final item in the declaration coming out of Friday’s summit includes a statement about South and North Korea’s common goal “of realizing, though complete denuclearization, a nuclear-free Korean Peninsula.”

The thing is, North Korea has been making similar statements going back at least to the early 1990s.

Today, the North has between 20 and 60 nuclear warheads. Is Kim willing to give them up? All of them, or just some of them? How soon? And how will any of this be verified?

“Essentially, this issue of denuclearization is still not clear at all,” says James Kim of the Asan Institute for Policy Studies in Seoul.

He says the Trump-Kim summit appears to be on track. But is it a real opportunity for success?

Maybe so, says James Kim, if the opportunity is about walking back the recent trend of escalating tensions and creating a more stable environment. But when it comes to the likelihood of denuclearization?

When Americans talk about “denuclearization on the Korean peninsula,” what typically jumps to mind is the prospect of North Korea giving up its nuclear weapons and programs.

But when the North Koreans use the phrase, Kim says they mean something different.

“It has implications for the nuclear umbrella that the United States provides as a deterrent against the North Korean threat,” he says.

That is a reference to the US military presence in Asia, which includes large American bases in South Korea and Japan.

It is unclear if South Korea’s President Moon Jae-in spoke about this with Kim Jong-un when the two leaders had a private discussion at the summit.

“The optics of today’s summit were gripping,” says Sung-Yoon Lee, professor of Korean studies at the Fletcher School at Tufts University. “High on style, short on substance.”

“There was no serious discussion of how to bring about complete denuclearization of North Korea,” Lee says. “Nothing was mentioned on North Korea’s gulags, human rights, the pervasive hunger and poverty of the North Korean people.”

“Why don’t we say, ‘denuclearization of North Korea,’ when there are no nukes in the South? Because North Korea insists on that formulation. And in North Korean parlance, the phrase means dislodging the US extended nuclear deterrent from the peninsula and from Japan,” Lee says.

Lee worries that the stagecraft of today’s summit is encouraging the international community — including the US — to give Kim Jong-un a pass.

“Kim is the master impresario and he has morphed into a global everyman, … a normal head of state, from ‘Rocket Man’ just a few months ago.”

The North has shown no real willingness to give up its nuclear capability, Lee says. And that should be a cause for skepticism about any Trump-Kim summit.

“Trump is walking into this elaborate trap unprepared,” Lee says. “And I fear that President Trump will fall for that and come away from his meeting with Kim Jong-un thinking that he has tamed Kim Jong-un, and thereby relax sanctions.”

Barbara Demick is a longtime North Korea watcher, former Asia correspondent for the Los Angeles Times, and author of the book, “Nothing to Envy: Ordinary Lives in North Korea.”

“I don’t know anybody who covers North Korea who thinks the North Koreans are going to give up their nuclear program just like that,” Demick says. “If it happens, it will start with small, concrete steps leading toward a freeze."

In one sense, today’s summit was indeed successful, Demick says.

“It took us off this collision course where there was going to be ‘fire and fury,’ and whose button was bigger than the other’s. We were heading in a very, very dangerous direction.”

Demick says a Trump-Kim summit represents a potential opportunity. But she says expectations cannot run too high for a quick resolution of a long running stand-off. “My worry is that Trump might try to push a deal before it’s ready just for political expediency.”

Ambassador Wendy Sherman shares that concern. Sherman is a former US undersecretary of state for political affairs and has extensive experience negotiating with the North Koreans. She also has a forthcoming book called, “Not for the Faint of Heart: Lessons in Courage, Power and Persistence.”

“It’s fine that President Trump and Kim Jong-un are going to meet,” Shermans says. “It is a bit unusual to start at the top, as opposed to starting lower down the rung and work toward a summit.”

“Any such summit has to be extremely well prepared, and if one wants to get beyond the photo op, then there has to be very concrete steps.”

This would mean putting together an American team of negotiators, bringing in international weapons inspectors and agreeing on the definition of terms such as “denuclearization,” Sherman says.

There could be a chance of a “Nixon goes to China” type of breakthrough, she adds.

“Certainly, there is always that potential, but we should remember that ‘Nixon to China’ was preceded by many, many conversations between [then-Secretary of State] Henry Kissinger and the Chinese that had gone on for some time in secret before we saw that momentous moment.”