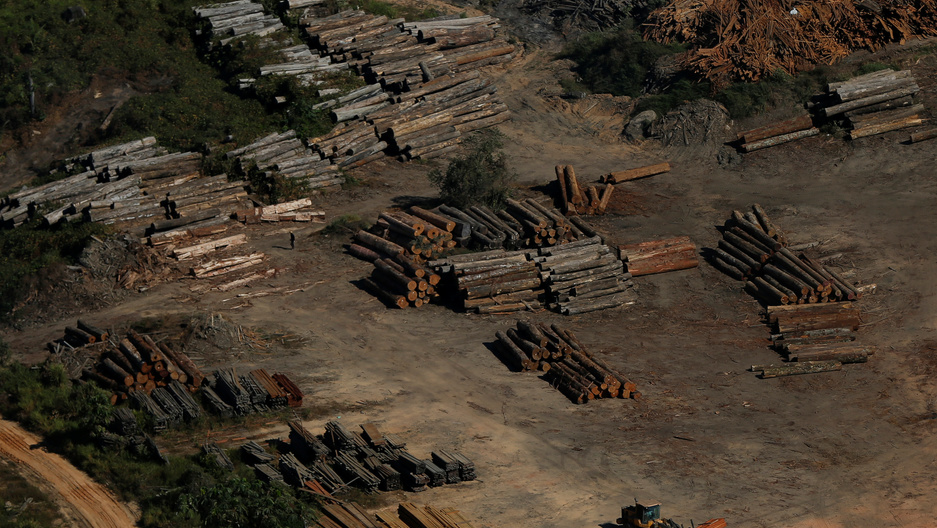 Piles of wood are seen in Brazil. First come the loggers, who illegally extract valued lumber. The cattle ranchers follow, burning the forest to clear land and plant green pasture that rapidly grows in the tropical heat and rain. After the pasture is worn out, soy farmers arrive, planting grain on immense tracts of land.

A sharp decline in biodiversity is affecting every region of the world, threatening the ability of citizens in many nations to find adequate food and clean water, according to a United Nations report.

The report, from the Intergovernmental Science-Policy Platform on Biodiversity and Ecosystem Services (IPBES), consists of four regional assessments that cover the globe. It explains biodiversity’s importance, details the main threats to humans and suggests paths to a more sustainable future.

“The world needs to know that we are degrading nature and that is undermining human well-being and our ability to supply food, clean water, and energy,” says Sir Robert Watson, chair of IPBES. “As we continue to degrade our environment, it's not just an environmental issue, it's also a development issue.”

Earth is losing species at an unsustainable rate, Watson says — more than 1000 times the natural speed of evolution. We are losing not only certain species, but the populations of many species are declining.

“If you're in America and you walk through a forest today, it would have 30 percent fewer butterflies, birds, animals and plants, and by 2050, it would have 40 percent less,” Watson points out. “So, we really are changing our ecosystems quite substantially.”

Land use changes are the main culprit. Humans have converted forests, grasslands and mangrove systems into agricultural fields, which are needed, of course, for food, but many of our agricultural systems are unsustainable, Watson says. “We’re producing more food, but we've got heavy use of chemicals — sometimes overuse of chemicals — in many parts of the world, which is degrading our soils. Those chemicals leach into … our freshwater systems, rivers and lakes.”

While land use change is the biggest threat to date, by 2050, in most ecosystems around the world, climate change will be an equally important threat, Watson adds. “We have to look at climate change and biodiversity together,” he insists. “They are both environmental, social, economic and development issues.”

Population growth aggravates all the problems, of course. “The more people we have on the Earth and the richer they are, the more they can demand resources,” Watson explains. “It's the combination of numbers of people and the ability to purchase. There's no question that the threats on Earth today are far more than, say, 50 years ago, and in 50 years time, there will even be more threats. So, the challenge we have is how can we meet the food needs, the water needs and the energy needs in a way that doesn't destroy biodiversity and nature.”

Maintaining biodiversity and changing our approach to land use is actually good for the economy, not a burden on it, as many tend to think, the study found. The researchers calculated the value of biodiversity ecosystems to be around $24 trillion a year, roughly equal to the GDP of the Americas. Land degradation to date has likely depressed the global economy by about 10 percent; that is, if humanity had not degraded its vital ecosystems, the economy would be 10 percent larger than it is today.

“When you look at the effect on the economy, many people immediately think of what I call the market value of food and water, but there's a huge economic value in the way biodiversity — nature — regulates our climate, regulates pollution, regulates our pollination services and [controls] storm surges to protect the coast from sea level rise,” Watson explains.

Ultimately, however, government and the private sector must also act much more sustainably, he adds. “The pledges under the Paris Agreement are not adequate to meet the two-degree target. They have to be doubled and redoubled. We need to do a much better job of managing our forests, a much better job of managing our agriculture. There's a good realization of what is needed, but we're falling short of implementation at the moment.”

“Our reports show we can do much better with the current knowledge, we can use technologies better, we can develop policies, we can have behavior changes,” he concludes. “There is at least a recognition of the problem; we now have to implement.”