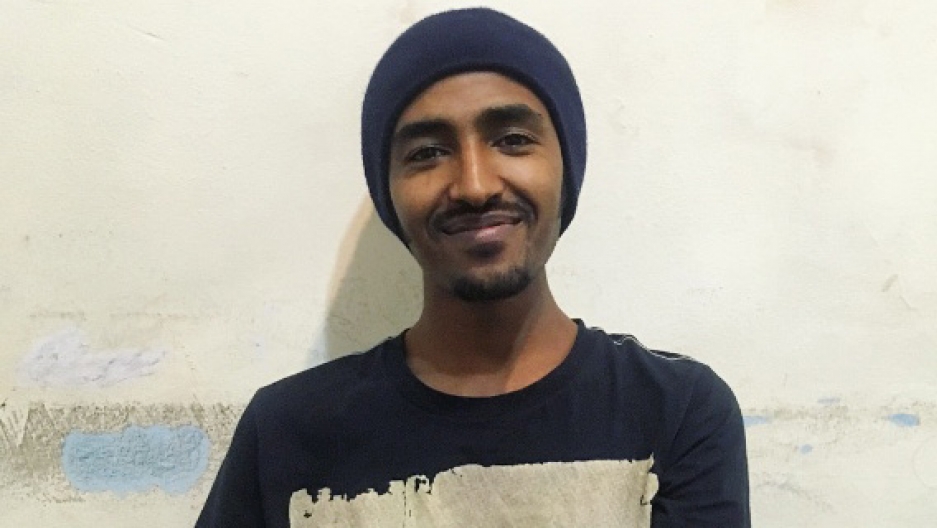 Teklit Michael dreamed of running in the London Olympics. But his country, Eritrea, jailed him. So he fled to Israel.

Teklit Michael started running with Eritrea’s fastest athletes when he was just 14 years old. His plan: to compete in the 2012 London Olympics.

Michael burned through a pair of sneakers nearly every month, so he went to work at a government textile factory to foot the bill. One day after hours of labor, he went to collect his earnings. But he says his supervisor, a government employee, refused to pay him. When Michael pushed back, the man threatened him.

“He told me, 'You are a son of a bitch, and you are talking against the government,'” Michael recalls.

According to Freedom House, a watchdog agency that evaluates the state of democracy worldwide, Eritrea is not considered a "free" country. The dictatorship there is considered among the most repressive governments in the world. Military conscription can stretch indefinitely, and rights groups say the country ranks at the bottom when it comes to press freedom — below North Korea. Michael says punishment for criticizing the government is often prison.

He eventually decided to quit that job.

One day after practice, Michael's running coach pulled him aside as if he was foreshadowing, and told him, “You’re born to run. So don’t stop running."

A few months later, the police arrived and handcuffed Michael, accusing him of questioning the government. They put him in a dirty, crowded prison cell, which Michael says he was routinely dragged out of and beaten.

But even in his cell, Michael continued to train. He says the other prisoners made room for him while he did jumping jacks and jogged in place.

After nearly a year of detention without an official charge, Michael decided to escape. He and another prisoner jumped a fence at night and sprinted into the darkness. When they reached the Sudanese border three days later, Eritrean soldiers tried to arrest them.

So they ran. Michael says the soldiers shot at them. Bullets hit the ground and dust flew up around his ankles. Michael remembers thinking “not my legs, not my legs. Please don’t shoot my legs,” he says. “I was always praying when people are shooting [at] me, 'Please don’t hit my legs.'”

He ran fast, all day, covering about 100 kilometers (about 62 miles). At some point, he and his friend from prison were separated.

When Michael finally made it to the Sudanese capital, Khartoum, he walked to a massive open-air stadium. It was empty. Michael was hungry and wearing plastic sandals on his feet, but he stepped onto the track — and he ran. He imagined the stadium packed with people, cheering him on.

“It reminds you that you are special person, you are human being. You are not just a person searching to live — or searching to survive,” Michael says.

For the first time since he was dumped in prison, Michael says he felt human again. But he quickly went back to survival mode because he heard that the Sudanese government was arresting and deporting thousands of Eritreans.

Michael earned some money working odd jobs, mostly on farms. He scraped up enough to pay smugglers to get him to Egypt and across the Sinai desert. There, he pulled himself over the border fence into Israel’s Negev desert.

A new life in Israel

He eventually made his way to Tel Aviv. At first, Michael was homeless. He got a job sweeping floors in a 10-story parking garage and during his breaks, he would run the stairs. He ran whenever and wherever he could.

One day, Michael was spotted by a coach from the Israeli national team. The coach told Michael he had the potential to run professionally and invited him to train with the team. He brought Michael new shoes and jerseys.

Michael's Olympic dreams were back on track. But there was one more problem standing in his way: he didn’t have papers or a passport.

“To be in that level [of competition] you have to have at least travel documents. I have none of them,” he says. “I am a stateless person. I am out of the system.”

He didn’t have much hope of that changing. Of the nearly 35,000 Eritrean and Sudanese migrants who have arrived in Israel since 2009, just 11 have received asylum.

Michael says his coach had one final idea, and it was a long shot. His coach told him that if he converted to Judaism, he might have a chance at citizenship. (Reporter's note: When I asked a spokesperson from the Israeli Federation of Athletics about this plan, he told me he had never heard of anything like that happening.)

Michael went to church, where he sat down to think about the suggestion. By the time he stood up, he says he knew it wasn’t an option for him. He was Eritrean and an Orthodox Christian. He says that converting felt as if it would be a betrayal of his identity.

Putting away his running shoes, and picking up a new purpose

He made another decision at that point too. He gave up his dream of Olympic competition.

Michael, 29, now works as an advocate at the Eritrean Community Center in south Tel Aviv. In the past few years, he has spoken out against Israeli policies targeting asylum-seekers from African countries.

“When I stopped training one thing came to my mind: I have to shift my thinking. Not just to cry, but to do more meaningful things,” he says.

The Israeli government announced plans in January to deport about 20,000 African migrants over the next two years. On April 2, Israeli Prime Minister Benjamin Netanyahu announced a deal with the United Nations Refugee Agency to resettle about 16,000 African migrants to the West and give a similar number temporary status to remain in Israel. When he heard the news, Michael says he felt more optimistic than he had in years.

But the next day, Netanyahu cancelled the deal, amid criticism from harder-line members of his governing coalition.

Michael now says he doesn't trust any government anymore. Every government, he says, has betrayed him.

Related: This Eritrean woman found out her husband had abandoned her when she couldn't find her bank card to pay rent