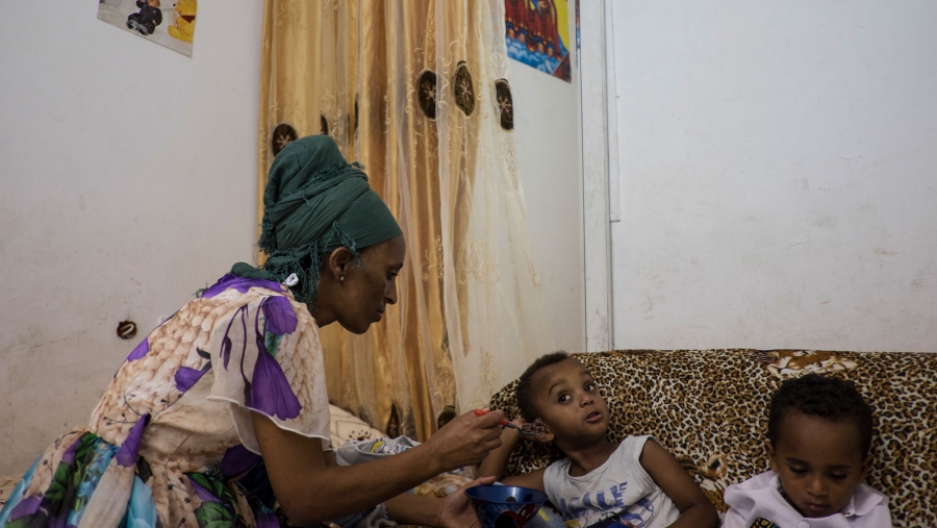 Brkitay Gebru wakes every morning at dawn to care for her children. Her husband took off in February and she hasn't heard from him since.

In a one-room apartment in south Tel Aviv, Brkitay Gebru shares a bed with her two sons. On a recent afternoon she was so tired she didn’t bother telling 3-year-old Netanael to stop jumping on the mattress with his sneakers on.

Gebru, 29, says she left Eritrea in 2010 to escape mandatory lifelong military service as an army cook. Men and women are drafted indefinitely, which is one reason Eritreans are among the largest group of asylum-seekers in the world. Gebru made her way through Egypt and into Israel, where she met her husband, also Eritrean, and started a family.

This February, though, Gebru’s husband disappeared. At first, she chalked it up to mismatched schedules. They both worked as cleaners and sometimes didn’t see each other for days.

“The landlord came to collect the rent, and I didn’t have money,” she says. “So, I went to get my bank card, and it was gone. And then I asked my friends, 'Where is my bank card? And where is my husband?' They told me he went to Africa.” 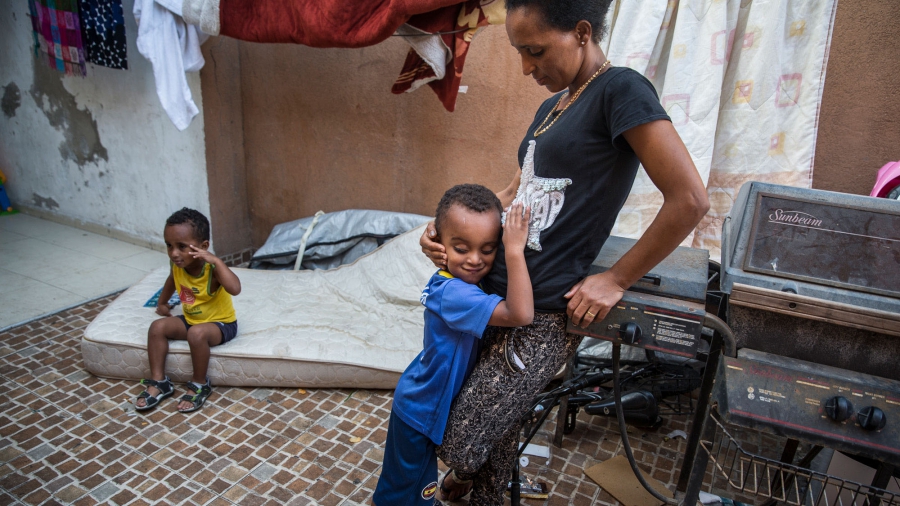 Gebru says she hasn’t heard from him since. She is one of dozens, possibly hundreds, of Eritrean women in Israel whose husbands have gone missing.

But there is a place where you can find some of them: at a branch of Israel’s Ministry of the Interior in southern Tel Aviv, down a hallway marked, “voluntary departure.”

Over the past decade, more than 60,000 African asylum-seekers (most of them Eritreans, though some Sudanese) have crossed into Israel. They say they are fleeing military dictatorship in Eritrea and genocide in Sudan’s Darfur.

Israel doesn’t deport them — that would violate international refugee law. But it does make it uncomfortable for them to stay. Israel fenced off its border with Egypt and built a detention center in the desert. And a few years back, Israel also started offering migrants $3,500 with a one-way ticket home. Or they can go to Rwanda or Uganda, which reportedly have signed secret deals with Israel to accept them. More than 2,000 people have taken that offer.

The voluntary program is unusual because it involves a third country. Israeli authorities will not give many details on it, but in court documents, the government says the migrants would be safe and able to work in the new countries. Activists dispute this and say migrants are not given asylum or work permits.

A ministry official, who spoke on condition of anonymity, says he doesn’t usually ask men who sign up to leave whether they are married. Women who come to ask about their missing husbands need a court order to get information. Often, marriage records are incomplete.

Helen Tigane, who runs an aid organization for Eritrean women in Tel Aviv, estimates there are about 500 Eritrean single mothers in Israel now. It’s impossible to know how many of their husbands are still in Israel or went abroad. Tigane says men often leave quickly, usually after a big fight with their wives. She says when the men go, they clean out the family bank accounts, too.

Sometimes the men get in touch. One woman told me her husband disappeared and then contacted her from Las Vegas. She’s trying to join him there with their son.

Sometimes men leave in secret because they plan to take dangerous smuggler routes, and they don’t want to put their families in jeopardy.

Israel says its migration policies help discourage other Africans from trying to enter the country illegally, and that the country is too small to handle thousands of migrants. But critics say a nation like Israel, founded by refugees, has a special obligation to help. They worry the current policies are creating an underclass. And they’ve challenged the policies in court.

On Saturdays, Gebru goes to St. Mary’s church in southern Tel Aviv. There are a lot of single mothers here from Eritrea. She closes her eyes and prays while her two kids play with a smartphone under the chairs.

Gebru says life is harder now, but she tries to give her kids a normal childhood. In October, Israelis observed Yom Kippur, the Day of Atonement. Almost all Israelis avoid driving on that holiday, and kids on bikes take over the streets.

Gebru says her boys asked her why they didn’t have bikes. So, she borrowed about $200 from a friend and bought them each a two-wheeler.

She told them they were a gift from their father.