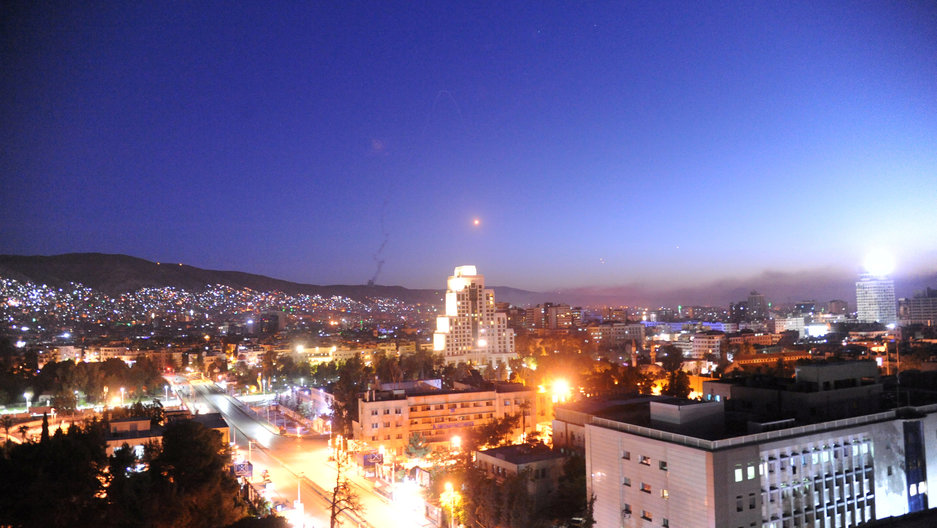 US, British and French forces struck Syria with more than 100 missiles on Saturday in the first coordinated Western strikes against the Damascus government, targeting what they said were chemical weapons sites in retaliation for a suspected poison gas attack.

President Donald Trump announced the military action from the White House, saying the three allies had "marshaled their righteous power against barbarism and brutality."

The bombing represents a major escalation in the West's confrontation with Assad's superpower ally Russia, but is unlikely to alter the course of a multi-sided war that has killed at least half a million people in the past seven years.

That in turn raises the question of where Western countries go from here, after a volley of strikes denounced by Damascus and Moscow as at once both reckless and pointless.

By morning, the Western countries said their bombing was over for now. Syria released video of the wreckage of a bombed-out research lab, but also of President Bashar al-Assad arriving at work as usual, with the caption "Morning of resilience."

There were no immediate reports of casualties. Damascus's allies saying the buildings hit had been evacuated in advance.

Russia had promised to respond to any attack on its ally, and said on Saturday that Syrian air defenses had intercepted 71 of the missiles fired.

But the Pentagon said the United States had "deconfliction" contacts with Russia before and after the strikes, that Syrian air defense systems had been largely ineffective and there was no indication that Russian systems had been employed.

British Prime Minister Theresa May described the strike as "limited and targeted", with no intention of toppling Assad or intervening more widely in the war. She authorized British action after intelligence showed Assad's government was to blame for gassing the Damascus suburb of Douma a week ago, she said.

In a speech, she gave a vivid description of the victims of the alleged chemical strike that killed scores, huddling in basements as gas rained down. She said Russia had thwarted diplomatic efforts to halt Assad's use of poison gas, leaving no option but force.

French President Emmanuel Macron said the strikes had been limited so far to Syria's chemical weapons facilities. Paris released a dossier that it said showed Damascus was to blame for the poison gas attack on Douma, the last town holding out in a rebel-held swathe of territory near Damascus that government forces have recaptured this year.

Washington described its targets as a center near Damascus for the research, development, production and testing of chemical and biological weapons, a chemical weapons storage site near the city of Homs, and another site near Homs that stored chemical weapons equipment and housed a command post. 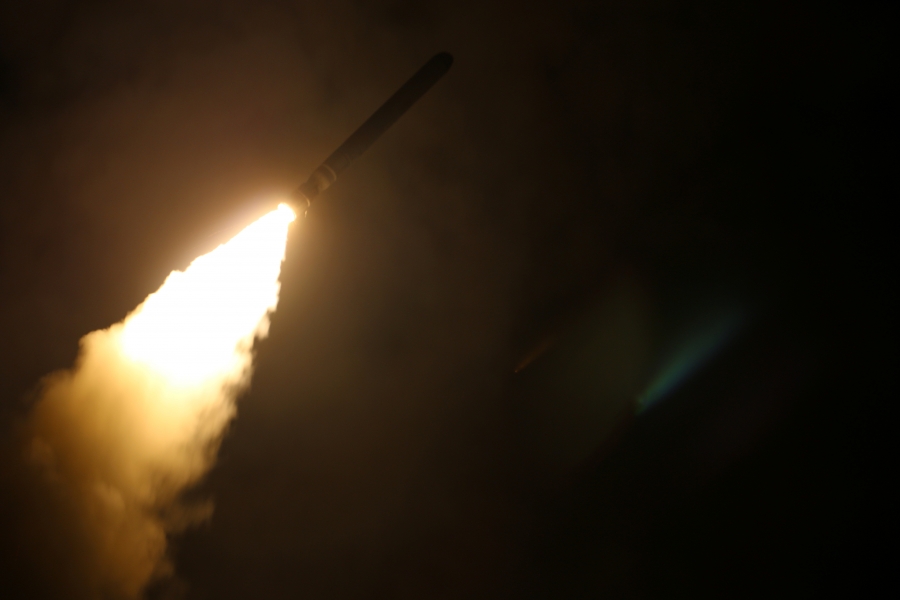 "We are prepared to sustain this response until the Syrian regime stops its use of prohibited chemical agents," the US president said in a televised address.

The Pentagon said there had been chemical weapons agents at one of the targets, and that, although there were other parts to Syria's chemical weapons system, the strikes had significantly crippled its ability to produce such weapons.

Russian President Vladimir Putin called for a meeting of the U.N. Security Council to discuss what Moscow decried as an unjustified attack on a sovereign state. Diplomats said the meeting would take place in New York at 11 a.m.

Inspectors from the global chemical weapons watchdog OPCW were due to try to visit Douma later on Saturday to inspect the site of the suspected gas attack on April 7. Moscow condemned the Western states for refusing to wait for their findings.

Russia, whose relations with the West have deteriorated to levels of Cold War-era hostility, has denied any gas attack took place in Douma and even accused Britain of staging it to whip up anti-Russian hysteria.

But despite responding outwardly with fury to Saturday's attack, Damascus and its allies also made clear that they considered it a one-off, unlikely to meaningfully harm Assad.

A senior official in a regional alliance that backs Damascus told Reuters the sites that were targeted had been evacuated days ago thanks to a warning from Russia.

"If it is finished, and there is no second round, it will be considered limited," the official said.

Dmitry Belik, a Russian member of parliament who was in Damascus and witnessed the strikes, told Reuters: "The attack was more of a psychological nature rather than practical. Luckily there are no substantial losses or damages."

At least six loud explosions were heard in Damascus and smoke rose over the city, according to a Reuters witness. A second witness said the Barzah district of Damascus was hit.

A scientific research lab in Barzah appeared to have been completely destroyed, according to footage from Syrian state TV station al-Ikhbariya. Smoke rose from piles of rubble, and a bus parked outside was heavily damaged.

But the Western intervention has virtually no chance of altering the military balance of power at a time when Assad is in his strongest position since the war's early months.

In Douma, site of the suspected gas attack, the last buses were due on Saturday to transport out rebels and their families who agreed to surrender the town, state TV reported. That effectively ends all resistance in the suburbs of Damascus known as eastern Ghouta, marking one of the biggest victories for Assad's government of the entire war.

Russian and Iranian military help over the past three years has let Assad crush the rebel threat to topple him.

The United States, Britain and France have all participated in the Syrian conflict for years, arming rebels, bombing Islamic State fighters and deploying troops on the ground to fight that group. But they have refrained from targeting Assad's government, apart from a volley of US missiles last year.

Although the Western countries have all said for seven years that Assad must leave power, they held back in the past from striking his government, lacking a wider strategy to defeat him.

The Western powers were at pains on Saturday to avert any further escalation, including any unexpected conflict with their superpower rival Russia. French Defense Minister Florence Parly said the Russians "were warned beforehand", to avert conflict.

The combined US, British and French assault involved more missiles, but appears to have struck more limited targets, than a similar strike Trump ordered a year ago in retaliation for an earlier suspected chemical weapons attack. That strike had effectively no impact on the war.

Mattis said the United States conducted the strikes on the basis of conclusive evidence that chlorine gas had been used in the April 7 attack. Evidence that the nerve agent sarin was also used was inconclusive, he said.

Syria agreed in 2013 to give up its chemical weapons after a nerve gas attack killed hundreds of people in Douma. Damascus is still permitted to have chlorine for civilian use, although its use as a weapon is banned. Allegations of Assad's chlorine use have been frequent during the war although, unlike nerve agents, chlorine did not produce mass casualties as seen last week.

A US official familiar with the military planning said there could be more air strikes if the intelligence indicates Assad had not stopped making, importing, storing or using chemical weapons, including chlorine. The official said this could require a more sustained US air and naval presence.

The US, British and French leaders all face domestic political issues surrounding the decision to use force in Syria.

Trump has been leery of US military involvement in the Middle East, and is eager to withdraw roughly 2,000 troops in Syria taking part in the campaign against Islamic State.

"America does not seek an indefinite presence in Syria, under no circumstances," Trump said in his address. 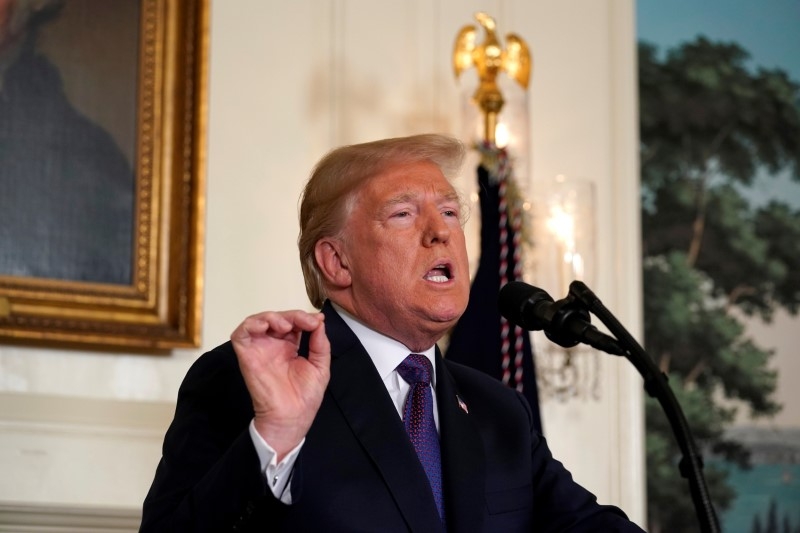 President Donald Trump makes a statement about Syria at the White House in Washington, April 13, 2018.

Trump has tried to build good relations with Russian President Vladimir Putin. A prosecutor is investigating whether Trump's campaign colluded with Moscow in illegal efforts to help him get elected, an investigation Trump calls a witch hunt.

In Britain, May's decision to strike without consulting parliament overturns an arrangement in place since the 2003 invasion of Iraq. Her predecessor David Cameron was politically hurt when he lost a parliamentary vote on whether to bomb Syria.

Britain has led international condemnation of Russia, persuading more than 20 countries to expel Russian diplomats in response to a nerve agent attack on a former Russian spy in England last month. May made clear that case was part of her calculus in ordering Saturday's strikes.

In France, Macron has long threatened to use force against Assad if he uses chemical weapons, and had faced criticism over what opponents described as an empty threat.