Daniel Vega and Maria Elena Figueroa at their home in Metepec, a municipality near Mexico City. For years, Vega has led a migrant's life. Now, he is putting down roots in Mexico.

Daniel Vega knows about the Central Americans moving through Mexico. He’s been one of them many times.

He was just 11 years old when he left Guatemala. He says that his parents died in a car wreck off a winding road near their home in the tropical highlands.

“I stayed with relatives for a time, but felt distant from them. We clashed, and I know there was something better somewhere else,” he says.

There was civil war at the time, and the work available was in the fields and, increasingly, intertwined with the heroin poppy trade. People left, including Vega’s friends. He left too.

Today, Vega is 39 and stocky, with short black hair. He has hardly kept still. In Mexico, he has worked throughout the country, from border cities such as Ciudad Juárez, Mexicali and Tijuana, along with places in the country’s center and south.

There was a time when he migrated through the United States, too: Texas, California, Arizona, Florida, New York, Nevada.

He has worked as an electrician, dishwasher, carpenter, painter, plumber, a barber. He was a cook for two years in San Francisco.

Related: He's been deported twice. This third time, his family is the US with him.

In 2016, Vega said his time in the United States — the back and forth — was over. He had been deported, again, and it would be the last time, he vowed.

“My time was up in the US,” he says. “I don’t want to try again. I’m tired of crossing, it’s expensive and, with Trump, life looks harder there now.” 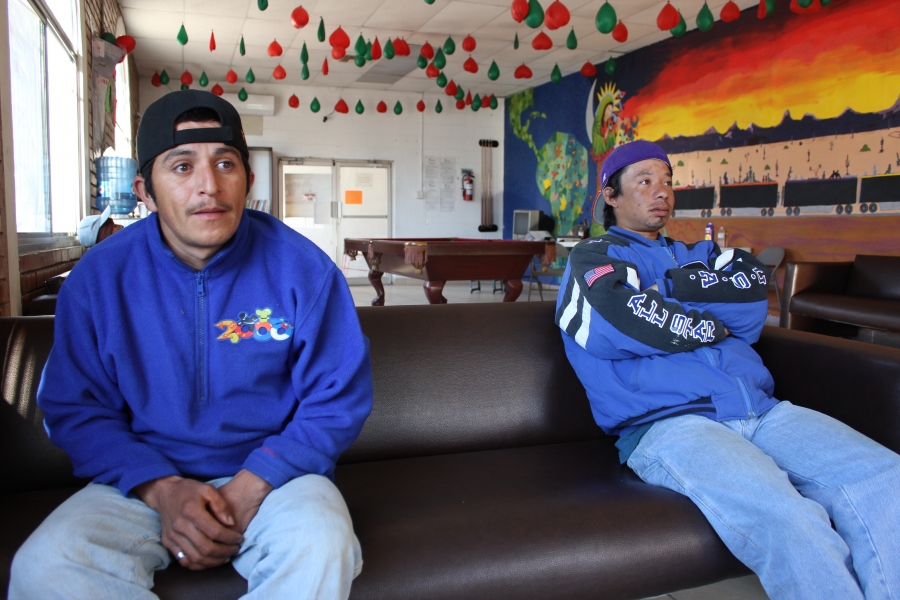 Daniel Vega, right, in 2016 at a migrant shelter run by a Catholic church in Ciudad Juárez. For years, Vega, from Guatemala, crossed back and forth between the United States and Mexico. After several deportations, he said, “My time was up in the US. I don’t want to try again. I’m tired of crossing, it’s expensive and, with Trump, life looks harder there now.”

He decided to stay in Mexico, undocumented. After a while, he met Maria Elena Figueroa on a bus near Mexico City. Now, Vega lives with Figueroa in Metepec, a municipality near Mexico City. Their home is two rooms of cinderblock, crammed with large wooden furniture. In one corner, there are plastic jugs of tepache, a fermented drink of pineapple rinds and piloncillo that the couple sells to neighbors. Water is also scarce in the neighborhood and the couple sometimes pumps it from a well.

Figueroa met Daniel on a bus near her home. “I fell for him because he was kind,” she says. “I admired his spirit, to go where there’s opportunity.”

She had traveled little within Mexico.

It's a hot summer day in 2017 and they're packing for Juárez: A 24-hour bus ride north to the border. Vega has heard about a carpenter job. “I’ll earn about $75 dollars a week,” he says. “It’s better pay there."

He responds to work leads, often from fellow Central Americans who he had met along the trails north pinging him through Facebook and WhatsApp. “They’ll say, ‘There’s a job up here, ‘mano. Crash with us.’ We’re like brothers, like family, because a lot of us have lost someone or are really on our own,” he says.

It only takes a few minutes for Vega to pack. He folds three shirts and two pairs of pants into a suitcase, along with a razor and a Bible. He then wraps a plaster statue of San Miguel, the archangel, in a blue blanket. It fills up most of the suitcase. 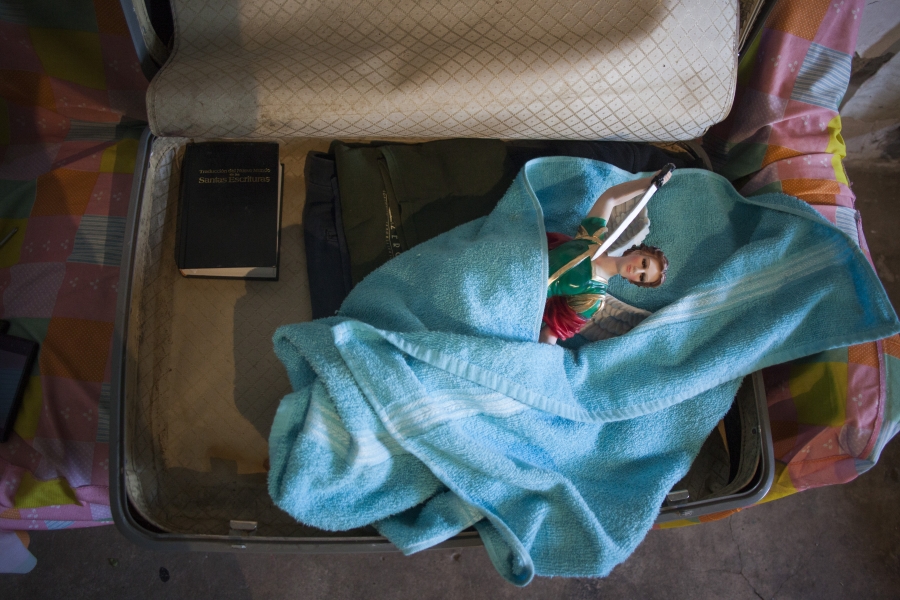 Daniel Vega travels with a plaster statue of San Miguel, the archangel. “It’s for protection,” he said. “I try to take it with me wherever I go. This life, always looking for work, isn’t easy. tThere’s hunger, exhaustion. I’ve seen awful things, migrants falling off trains. But you keep going.”

“It’s for protection,” he says. “I try to take it with me wherever I go. This life, always looking for work, isn’t easy. There’s hunger, exhaustion. I’ve seen awful things, migrants falling off trains. But you keep going.”

By this month, Vega was back, again, in Metepec, near Mexico City. Work in Juárez had dried up. He was also following the news of the Central Americans moving through Mexico and President Trump’s plan to send the National Guard to the border. “No, no, no, that won’t stop people,” he says. “If people want in, they’ll find a way.”

But he also saw that some Central Americans in the group may stay in Mexico, like Vega. “It’s a good idea,” he says. “If you really try, you’ll find opportunities in Mexico.” But, he warns, “the pay is less. And that’s tough for people who need to help their families back home. I don’t worry about that.”

Vega also warned that being undocumented anywhere is never easy. He has changed his way of speaking to sound Mexican. “I don’t tell people where I am from if I don’t have to,” he says. “It’s just not information I want to offer.”

Related: The 'Trump of Oaxaca' cracks down on Central American migrants

He has also hit walls. Recently, he says that he worked for three months as a security guard at a new housing complex in Metepec, a few blocks from his home but a world away. It is a massive development, tall, gold-colored gates at the entrance, manicured lawns and a clubhouse. Vega says they underpaid him and because he is undocumented, he did not fight it.

Still, Vega says that he looks over his shoulder less in Mexico than in the US, and he is committed to staying. He and Figueroa plan to marry this year. He wants to put down roots, at last.