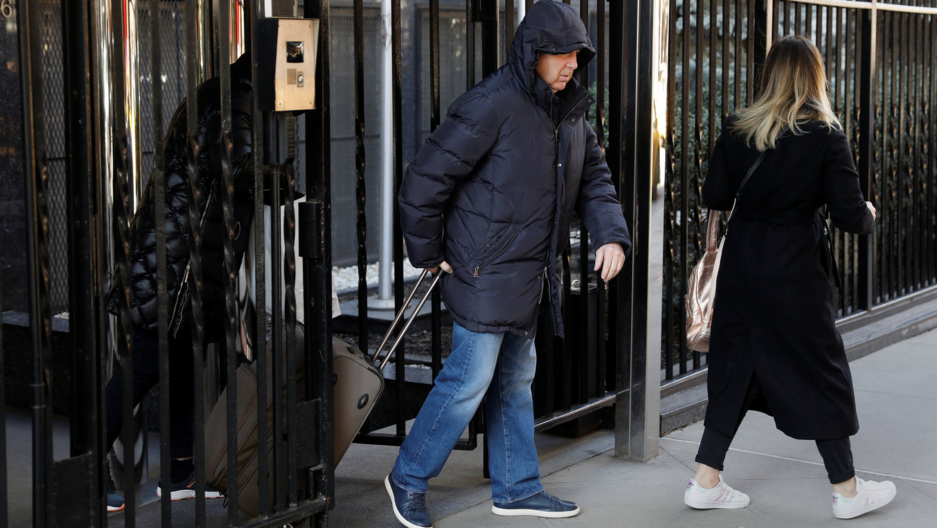 People depart the Permanent Mission of the Russian Federation to the United Nations in Manhattan on Monday.

The United States said on Monday it would expel 60 Russian diplomats, joining governments across Europe punishing the Kremlin for a nerve agent attack on a former Russian spy in Britain that they have blamed on Moscow.

It was the strongest action that US President Donald Trump had taken against Russia since coming to office. He has come under criticism from Democrats and from members of his own Republican party for failing to be tough enough on Russia over allegations of Russian meddling in the US electoral system including the 2016 presidential campaign.

British Foreign Secretary Boris Johnson tweeted that "Today's extraordinary international response by our allies stands in history as the largest collective expulsion of Russian intelligence officers ever and will help defend our shared security."

British Prime Minister Theresa May said the coordinated measures "clearly demonstrate that we all stand shoulder to shoulder in sending the strongest signal to Russia that it cannot continue to flout international law".

Russia's Foreign Ministry called the actions a "provocative gesture" and promised to respond. The Kremlin spokesman said the West's response was a "mistake" and that Russian President Vladimir Putin would make a final decision about Russia's response.

Moscow has denied being behind the attack on Sergei Skripal and his daughter in the southern English city of Salisbury on March 4. Skripal, 66, and his 33-year-old daughter Yulia were found unconscious on a public bench in a shopping center, and remain critically ill in hospital.

The staff expelled by the United States included 12 intelligence officers from Russia's mission to United Nations headquarters in New York. Trump also ordered the closure of the Russian consulate in Seattle.

"To the Russian government we say: When you attack our friends, you will face serious consequences," a senior US administration official told reporters, speaking on condition of anonymity.

The individuals concerned and their families have been given a week to leave the United States, according to one of the officials briefing reporters.

Trump, who before he took office in January last year promised warmer ties with Putin, last week congratulated the Russian leader on his re-election, drawing criticism from Republicans and Democrats alike. Trump said the two leaders had made tentative plans to meet in the “not too distant future.”

"The last time that the United States expelled so many Russian spies was when the Reagan administration ordered 55 Soviet diplomats out of the country in 1986," said Angela Stent, director of the Center for Eurasian, Russian and East European Studies at Georgetown University.

“This US solidarity with Britain and other European allies after the Skripal poisoning is unprecedented in the post-Soviet era and highlights the continuing downward spiral of Russia's relations with the West,” she said.

EU leaders said last week that evidence of Russian involvement in the Salisbury attack presented by British Prime Minister Theresa May was a solid basis for further action.

Germany and France made good on those threats by announcing expulsions and in a coordinated move, a string of other EU states also ordered expulsions, along with Canada and Ukraine.

Skripal's poisoning, alleged to have employed the Soviet-era military-grade nerve agent Novichok, is the first known offensive use of a nerve toxin in Europe since World War Two.

"In solidarity with our British partners, we have today notified the Russian authorities of our decision to expel four Russian personnel with diplomatic status from French territory within one week," said French Foreign Minister Jean-Yves le Drian.

"Response will be symmetrical"

Tusk said further measures could be taken in the coming weeks and months.

Russia said it would respond in kind.

"The response will be symmetrical. We will work on it in the coming days and will respond to every country in turn," the RIA news agency cited an unnamed Foreign Ministry source as saying.

The Kremlin has accused Britain of whipping up an anti-Russia campaign and has sought to cast doubt on the British analysis that Moscow was responsible. Russia has already ordered 23 British diplomats out of the country after Britain expelled 23 diplomats.

Russian Foreign Ministry spokeswoman Maria Zakharova suggested that the EU's expression of support for Britain was misguided given that it would be leaving the bloc next year.

"Britain is leaving the European family. No one canceled Brexit, and the divorce process is in full swing," Zakharova wrote on Facebook.

"Therefore a country which is leaving the European Union is exploiting the solidarity factor and is foisting on those countries that remain a worsening of relations with Russia."

A British court has said Skripal and his daughter may have suffered brain damage, while a policeman who went to help them has also indicated that he has suffered lasting damage to his health.

British Defence Secretary Gavin Williamson hailed the support for Britain during a visit on Monday to Estonia. Britain has troops there as part of a NATO mission to deter any Russian aggression following its seizure of Ukraine's Crimea in 2014.

"The world's patience is rather wearing thin with President Putin and his actions," Williamson said.

"Their aim is to divide, and what we are seeing is the world uniting behind the British stance — and that in itself is a great victory and sends an exceptionally powerful message to the Kremlin and President Putin."

Michael Holden and Roberta Rampton of Reuters reported from Washington and Moscow.