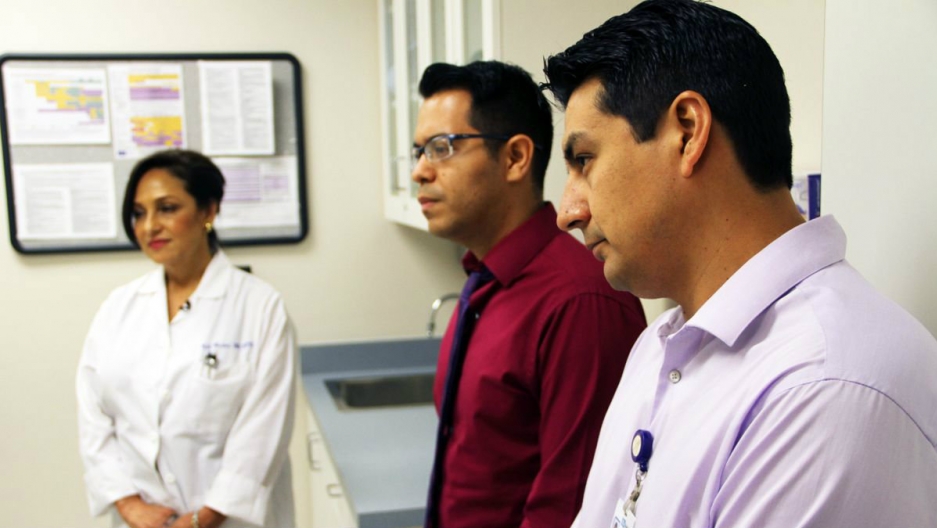 Dr. Michelle Bholat (left) stands with Dr. Luis Zúñiga (middle) and Dr. Félix Argueta (right), who are participants of UCLA's International Medical Graduate Program in June 2017. Bholat is a co-founder of the program. Foreign-born doctors Zúñiga and Argueta are expected to be matched with a residency program in 2019 and will work for a few years in underserved areas.

She spent 15 years in her native Venezuela studying medicine and working as a doctor. In 2001, she left the Andean hills of her home country for the frigid flatlands of southern Minnesota to spend three years researching at one of the world’s most prestigious health centers, the Mayo Clinic.

But after starting a family in the US, she never returned to Venezuela. She’s also never been able to work as a doctor.

Though she completed residency in Venezuela years ago, López de Padilla must go through residency in the US again if she wants to practice family medicine here. For years, she’s been struggling to match into another program.

“I wish I didn’t have to do it, but at this point, this is the system,” she said.

There are as many as 65,000 unlicensed foreign-trained doctors across the country like López de Padilla who have medical training and experience in their home countries but can't practice in the US, according to the Massachusetts Immigrant and Refugee Advocacy (MIRA) Coalition. Meanwhile, many organizations are anticipating physician shortages in upcoming years. A 2017 study from the Association of American Medical Colleges, for example, anticipates a deficit of 100,000 doctors across the country by 2030. As underserved areas continue to grow, some states are finding that unlicensed foreign-trained doctors are key to solving the problem.

Programs in Los Angeles and in Minnesota are helping doctors like López de Padilla jump through the hurdles of practicing medicine — from passing exams to obtaining residency training. In return, participants promise to provide care in underserved communities. Massachusetts and other states are eyeing these programs as models to ease the path for internationally trained doctors while alleviating the doctor shortage.

While nine out of 10 medical students trained in the US get accepted to a residency here, just half of the foreign-trained medical graduates like López de Padilla make it, according to the National Resident Matching Program. At the same time, the number of US residency positions have grown only incrementally since Congress capped their funding levels more than 20 years ago.

Foreign-trained doctors often run into three main problems. First, residency programs generally look for doctors who graduated from medical school within the past five years. Second, US residencies want their candidates to have at least one year of clinical experience within the country, regardless of how much clinical experience an applicant may have abroad. Third, they need to study for and obtain high scores on multiple US Medical Licensing Examination tests.

All of these steps exist because no international body accredits medical schools across the world.

“The quality of medical training varies from country to country,” said Joe Knickrehm, a spokesman for the Federation of State Medical Boards.

López de Padilla, who currently works as a research associate in the Mayo Clinic’s musculoskeletal gene therapy lab, acknowledged these requirements exist because US health providers may have concerns about who they’re bringing into the system. But she also questioned where the line should be on learning the same things over again.

“Being in the same training, in my opinion, is a waste of your time and not the best use of resources,” she said.

More on healthcare in rural areas: Teaching health clinics work in underserved communities across the US, but funding is set to run out

The programs in California and Minnesota are trying to help foreign-born doctors navigate that system. In the last decade, the University of California Los Angeles’ International Medical Graduate (IMG) Program has helped match 117 foreign-trained doctors into family medicine residency programs.

Patrick Dowling, who co-founded the UCLA program in 2007, said that about five million Californians lack English proficiency and 15 million Hispanics live in the state. The demand for more Spanish-speaking doctors has long been pressing.

At the same time, Dowling and his colleagues have known of foreign-born doctors who had qualifications but were relegated to working in other industries.

“We found a large group of [foreign-trained doctors] working menial jobs, from construction to McDonald’s to janitor to sanitation, you name it,” Dowling said.

Foundation money supports UCLA’s IMG program. It is selective — Dowling estimated it accepts about 12 of 100 to 150 applicants each year, all of whom must be permanent residents.

But Dowling said the payoff for enrollees is the hands-on experience at community clinics and letters of recommendation they can earn in the program. In many cases, foreign-trained doctors shadow practicing doctors to get the one year of clinical experience needed in their residency applications instead of directly treating patients. In these cases, foreign-trained doctors are limited to observation because they’re not licensed to work on patients. In comparison, those with US degrees can treat patients right out of medical school and only need a residency to practice independently.

Minnesota's International Medical Graduate program started in 2015 and has helped foreign-born doctors find medical training and prepare for the board exams. The state-run program also funded four residency positions for foreign-trained doctors in the Minneapolis and St. Paul area.

Yende Anderson, the program’s coordinator, said the number of residency positions will increase to six this summer. After residency, each doctor will be required to spend five years practicing in one of the state’s underserved areas, where physician shortages abound. To date, none have completed their residencies.

López de Padilla, for her part, got help from the Minnesota program to enroll in three community clinic rotations. She’s currently studying for exams and observing a doctor at a community health clinic.

Faced with daunting obstacles, some foreign-trained doctors give up. That’s what Afsaneh Moradi did after nearly a decade of trying. She first came to the Boston area from Iran in 2007 to be with her husband and family. By then, she had seven years of experience between medical school and working as a doctor in Qom, an area located roughly 80 miles southwest of Tehran.

After moving to Boston, Moradi said she spent roughly five years studying for and taking the required board exams. For the next four years, she applied to hundreds of residencies. Originally, she focused on internal medicine residencies, but she soon expanded to other areas like psychiatry.

“I applied to literally anything and everything,” Moradi said.

She also shadowed as many doctors as she could; at one point she spent six months commuting three hours a day to Worcester, Massachusetts, to volunteer at Saint Vincent Hospital.

Today, she juggles three part-time jobs as an instructor for medical assistant students, a medical researcher at Cambridge Health Alliance and a social worker at the Somerville Public Library.

Exhausted and frustrated from four years of applying for residencies, Moradi gave up last year and doesn’t plan to start trying again. She attributes the bulk of her rejections to a low number of US residency positions that are not in step with the demand from medical students.

“How many times do you want to get rejected?” she said. “I don’t see a point.”

But she also told her story to Massachusetts state senator, Jason Lewis, a Democrat who represents the northern area of Greater Boston. Lewis sponsored a bill to establish a state commission to study barriers and pathways for foreign-trained doctors.

“In Massachusetts, even though we have a world-class health care system, we still have many gaps where we have patients who find it difficult or have to wait in order to see a doctor,” Lewis said.

So far, the Senate passed a version of Lewis’s bill. If it clears the full legislature and is signed into law, the commission will have one year to come up with recommendations to present to the state legislature.

Though this process would inevitably take time, MIRA Coalition Legislative Affairs Director Amy Grunder said a similar commission birthed the Minnesota IMG program. She emphasized that industry stakeholders like the state’s health licensing boards will want to weigh in on any future changes.

“You want to get the people in the room that might have opposition,” Grunder said, adding that they’d then “explore together how to address the problem.”

Morandi, for her part, said she hopes that her home state will find ways to ease the burden of foreign-trained doctors, even if it doesn’t work out for her situation.

“It’s not about lowering the standards; we don’t want that,” she said. “It’s about taking advantage of people that are already qualified.”