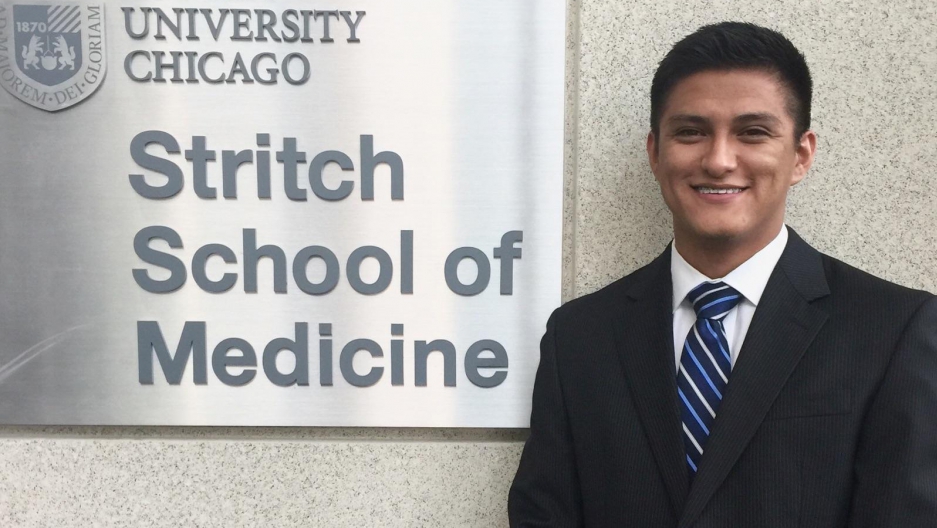 Julio Cesar Ramos was selected this summer to enroll in a program at Loyola University’s Stritch School of Medicine to help prepare him for medical school. He hopes to attend in the fall.

Growing up in the Rio Grande Valley of south Texas, 24-year-old Julio Cesar Ramos didn’t know he was undocumented. He was in 10th grade when he had to fill out an application to go on a field trip that required him to include his social security number.

“I went back and asked my mom what’s my social security number and that kind of began the whole discussion of, ‘We don’t have one,’” says Ramos.

That experience motivated him to work even harder in school. But it was another life experience, that helped shape his future.

“When I was 12 years old, my mother was diagnosed with breast cancer and it was a very traumatic thing because it was the first major health issue in our family,” says Ramos. “I remember the special interaction that the physician had with my mother, and I want to have that role in my community. I want to help people and educate them about their health, so they can live to be prosperous and live to be with their families.”

Ramos is now a middle school biology teacher in south Texas, but he recently applied to the medical school at Loyola University in Chicago. It’s one of the few medical schools in the nation that allows undocumented students who have received DACA to attend. DACA, Deferred Action for Childhood Arrivals, is President Barack Obama’s executive action which gives some immigrants brought here as children work authorization and temporary relief from deportation.

Follow: We're keeping up with Julio Ramos as he navigates his life in the Trump administration.

Linda Brubaker, dean of the Stritch School of Medicine at Loyola, estimates that there are 65 DACA medical students currently enrolled in medical schools across the nation. Their dreams and Ramos’ may be put on hold, though, because President-elect Donald Trump opposes the DACA program. As president, he will have the authority to end it.

The Association of American Medical Colleges says that, if things continue as they are, we could could have a shortage of almost 95,000 physicians by 2025. That’s one of the reasons why Brubaker has been an advocate for the undocumented medical students who may not be able to finish their medical education.

“There’s absolutely no benefit to anyone to not let these current 65 students finish their education and serve as physicians,” she says. “It does not help the American people because we won’t have those 65 physicians out in the field to serve a variety of communities that need those physicians.”

The Stritch School at Loyola University in Chicago currently has 28 undocumented medical students, who are able to attend because of the Obama administration’s Deferred Action for Childhood Arrivals program.

The Stritch School currently has 642 medical students, 28 of whom are undocumented and have work authorization through DACA. The chairman of the department of medical education, Dr. Mark Kuczewski, says they are committed to keeping them in the program because they bring unique skill sets and many languages.

David Gomez, 29, is in his second year of medical school at Loyola and is concerned about his future because he too is undocumented. Gomez is not his real name; he asked us to use this pseudonym to protect his undocumented family members.

He came to the US from Mexico at a young age with his parents, who overstayed their tourist visa and, like Ramos’ family, settled on the border in the Rio Grande Valley.

Gomez says growing up in the US, he and his five siblings were taught the value of hard work. They helped their parents mow lawns and clean houses to earn money. But he quickly realized education was a way out of poverty.

“We knew we didn’t want to be mowing lawns forever,” says Gomez. “We really liked school, so we worked really hard to ensure we would be accepted into university and be able to finance it without having to ask my parents for a penny.”

The only thing that can be done to protect the program during Trump’s administration is to convince Congress to pass a law.

Republican Sen. Lindsey Graham has drafted bipartisan legislation that would help keep deportation relief for people like Ramos and Martinez in place once Trump takes office. Sen. Jeff Flake, a Republican from Arizona, is proposing legislation that combines relief for people brought to the US as children with tougher language on undocumented people who have committed serious crimes.

If this type of legislation isn’t passed and DACA is revoked, it will put Ramos and Gomez in a financial bind, because the cost of medical school is about $30,000 per semester at Loyola’s medical school.

While undocumented students are not eligible for federal financial aid, the Stritch School of Medicine has some programs in place with the state of Illinois to help provide loans to DACA students. The program Gomez is in requires him to practice primary care medicine in an underserved area of Illinois after he graduates and completes his residency training.

“I do not have family members with money I could borrow money from and I have nothing to sell,” says Gomez. “Without DACA, I would have to withdraw from school and the almost two years investment in my education would have gone to waste and my debt will not be forgiven.”

However, Brubaker says their medical school is looking into ways for DACA students to continue their education, even if the program is revoked.

“We are planning for the possibility of having to move from a loan model to a pure scholarship model to accommodate students,” says Brubaker.

“Right now, the process of finding private lenders who might be interested in and willing to providing resources to these students is frozen,” he says. “It will be very difficult for an incoming class to have the same resources available that we’ve been able to find for the prior classes we’ve admitted.”

The struggle is not just about money though. Gomez says people sometimes think he’s taking a coveted spot in medical school that should go students who aren’t undocumented.

Gomez says he recently had a conversation with a classmate who said he felt like an average midwestern white male can no longer be competitive.

“My thought to that is, well, bless you. You’ve been so blessed to not experience the things I’ve been through to get to the same point. However, make your own story, follow your own passion,” says Gomez. “If you’re blessed and you call yourself an average midwest white boy, use that to help others.”

As the new year approaches, Gomez says one of his biggest concerns is being specifically targeted in the Trump administration.

In the meantime, Ramos is waiting to hear back from Loyola’s Medical School. He should learn sometime in the spring if he has been accepted. The school, says Kuczewski, is proceeding with their normal admissions process regardless of what Trump does with the DACA program.