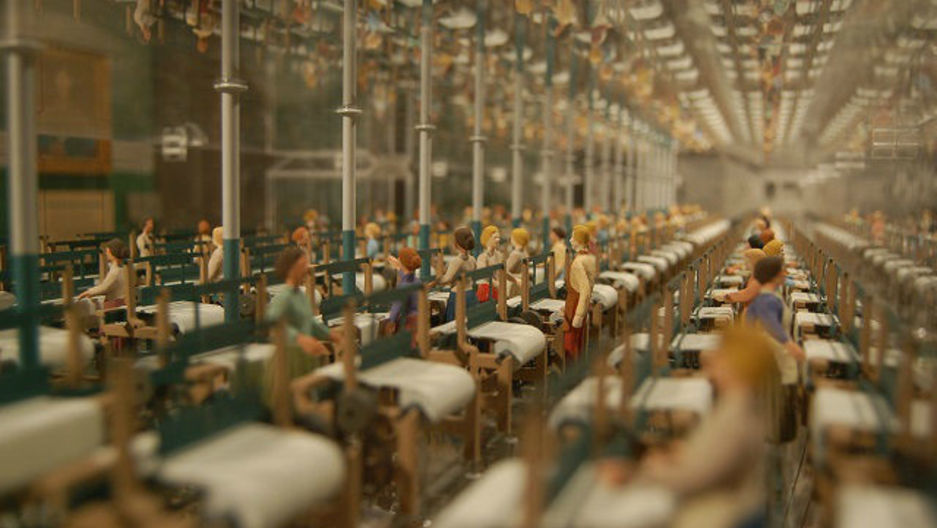 A scale model of the Boott Cotton Mill.

Look around you: at your computer, your phone, your water bottle, or the books on your desk. Chances are, all of these things came from a factory. Even if you don’t think about them too often, factories make our modern world possible. Indeed, you might argue that factories created the modern world, sometimes in ways that are rarely discussed.

The factory has been an integral part of America for a long time. Consider the 1876 centennial exhibition in Philadelphia. It was a celebration of the American nation; its legacy, triumphs, and greatness. And what was its centerpiece? “It’s not the [founding] documents,” Joshua Freeman author of Behemoth: A History of the Factory and the Making of the Modern World, says. “It’s not George Washington’s wooden teeth. It’s a steam engine. And President Grant comes and flips the switch, and the steam engine starts and powers all the factory equipment that’s there.”

Though the first factory was an English silk mill, built in 1721, the idea of the factory system spread quickly. First throughout England, then Europe, then to America. The reason? “There are just enormous efficiencies associated with the factory, with the coordination of production, the scale of production, and the application of external power to production,” Freeman says.

And these enormous efficiencies have sometimes impacted people’s lives in horrifying ways. Freeman notes that young children were often put to work in the crowded chaos of early factory floors. Sometimes orphans would be conscripted.

Much like labor conditions, environmental impacts often weren’t important to factory owners of the 18th and 19th century. (Freeman points out that smoke was seen as a sign of prosperity.)

These factories drove foreign policy too. Growing cotton isn’t exactly possible in Europe, and England needed that raw material for its textile mills. Freeman believes that Europe’s hunger for cotton absolutely shaped the entire world order. “[It] was one of the great reasons for the spread of American slavery. ... Ninety percent of their cotton comes from America by the 1820s, 1830s. So there’s a huge amount of global transformation, and frankly, global misery, in the process of supplying factories with raw materials,” he says.

Beyond the motivations of nations, the factory also changed the daily lives of workers. Henry Ford introduced the assembly line, as children learn in school, but that wasn’t the end of it. When he first launched the assembly line, workers absolutely hated it, according to Freeman.

Turnover was so great that Ford had to hire four times the number of laborers the assembly line actually needed. His solution was to increase wages, and make that wage increase contingent on workers adopting “good habits.” These included not drinking, not being wasteful, and not “living in sin.” And he created a “sociological department” that would go to people’s homes and make sure they were practicing those habits. In a sense, Freeman says, Ford didn’t just create “a new assembly line, but a new social system to accompany it.”

But this social system didn’t stay in place. It evolved, and was shaped by workers themselves, especially workers in unions. Freeman points out that consolidation in factories actually gave workers power, since they were able to stop work and go on strike. (Think of Norma Rae as a cinematic example.)

“You could argue [that] this golden age of America that people are often very nostalgic for — from the end of the Second World War up to the late 1970s — in part, rested on the combination of the large factory and unionization,” Freeman says.

This golden age may have ended, and many manufacturing jobs may have left the US, but the factory still shapes our world. “The largest factories in human history exist right now,” Freeman says. “They’re making things like your sneakers and your cell phone. And some of these factories have 200,000 or 300,000 workers in a single factory complex. They’re absolutely mind-boggling.”