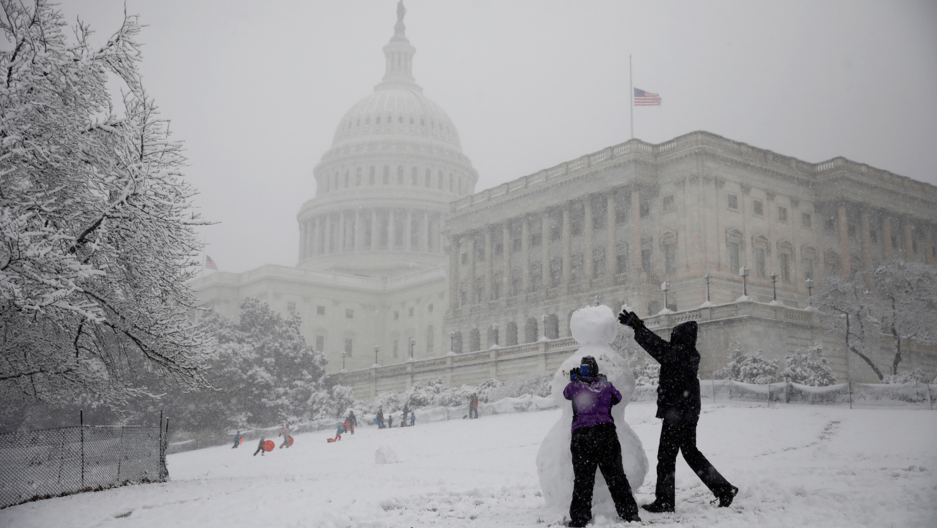 People build a snowman outside the US Capitol in Washington, DC, March 21, 2018.

The US House of Representatives on Thursday approved a $1.3 trillion spending bill to avert a government shutdown and fund federal agencies through Sept. 30, despite a revolt by fiscal conservatives worried about what they called runaway spending.

The Republican-led chamber backed the measure 256-167, sending it to the Senate ahead of a midnight Friday deadline. But 90 of the 238 House Republicans ignored pleas for support from House Speaker Paul Ryan and voted against it.

Coupled with recently enacted tax cuts, the bill is projected to lead to budget deficits of more than $800 billion for this year. Conservatives balked at the deficit spending and warned it could create problems for Republicans running for re-election in November.

"This omnibus doesn’t just forget the promises we made to voters — it flatly rejects them," Representative Mark Meadows, head of the conservative House Freedom Caucus, said after the vote. "This is wrong. This is not the limited government conservatism our voters demand."

The Senate is expected to vote on the measure late on Thursday or Friday, before current government funding expires at midnight on Friday. The White House said President Donald Trump will sign the bill, which significantly boosts defense funding but scales back spending requests on some of his other priorities.

Passage of the spending bill would end several months of intense bickering between Republicans and Democrats over spending priorities, which led to two short government shutdowns earlier this year.

It also would include setbacks for Trump, who did not receive all of the funding he requested at one point in the negotiations for the southern border wall and whose proposals for severe cuts to the Environmental Protection Agency, State Department and other federal agencies also would be scaled back.

Democrats complained that in the rush to pass the bill, few if any lawmakers had time to read through the 2,232-page tome to see what it actually contained. The bill was unveiled late on Wednesday.

White House budget director Mick Mulvaney told reporters the White House did not get everything it wanted in the massive spending package but the president planned to support it.

Trump said on Twitter the bill will allow him to start building a wall on the US border with Mexico. "Got $1.6 Billion to start Wall on Southern Border, rest will be forthcoming," he wrote.

But Democrats argued the added funds will help build or restore a range of other barriers, including existing fencing, and would not pay for a concrete edifice that Trump originally said would be financed by Mexico — a claim the Mexican government has denounced.

Trump at one point wanted $25 billion included in the bill to fully fund construction of his proposed US-Mexico border wall, but negotiations with Democrats on that fell apart early this week, according to congressional aides.

Instead, Trump would get nearly $1.6 billion more for border security this year. More border patrol agents could be hired, but there would not be the significant increase in immigration agents working the interior of the country.

The Department of Homeland Security had sought a big buildup in those officers to boost deportation of undocumented immigrants.

Besides the $80 billion boost in military spending, the largest in 15 years, the measure includes new money for infrastructure improvements and combating Russian election hacking.

In response to public anger and frustration over mass shootings, including a Feb. 14 massacre at a Florida high school, the bill also contains modest improvements to background checks for gun sales and grants to help schools prevent gun violence.

These provisions were far short of steps many Democrats and gun control groups say are needed to stop the shooting deaths of school children, concert-goers, church worshipers and others.

A so-called "grain glitch" included in a tax law enacted at the end of last year would be repaired by the legislation.

Big grain buyers, such as Anheuser Busch Inbev NV, Cargill Inc and the ethanol industry, have complained the glitch gives lucrative tax breaks to grain producers for selling to farming cooperatives, and a lesser break for selling to agriculture companies.

The bill will provide a $307 million increase above the administration's request for counterintelligence efforts to fight Russian cyber attacks in 2018, when US midterm congressional elections will be held, and $380 million for grants to states to secure their election systems.

Among the spending increases for non-defense programs are substantial healthcare investments, including a $414 million increase for Alzheimer’s disease research, $40 million more for research on developing a universal flu vaccine and $17 million more for antibiotic-resistance bacteria research — all at the National Institutes of Health.

Other components of the bill include $10 billion in infrastructure spending for highways, airports, railroads and broadband, and a $2.8 billion increase to fund treatment and prevention of opioid addiction and research into the subject.