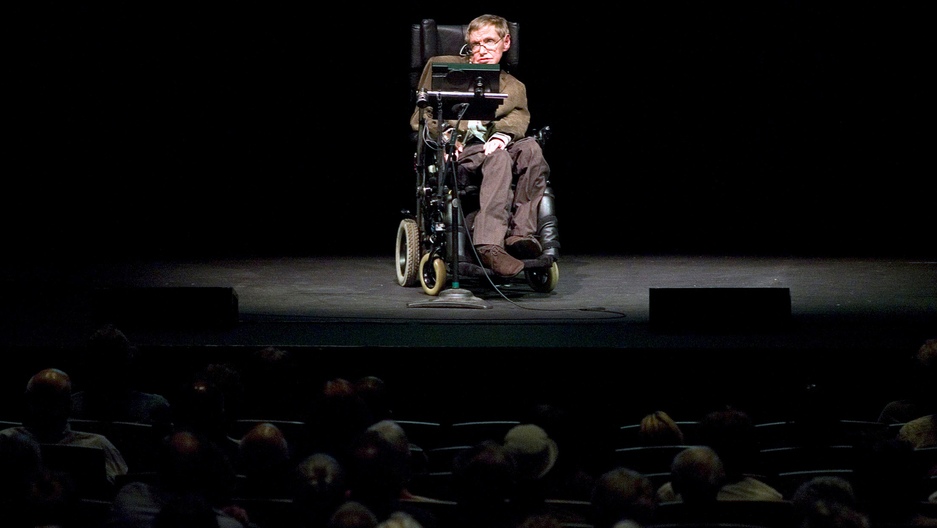 Stephen Hawking onstage discussing theories on the origin of the universe in a talk in Berkeley, California, 2007.

Renowned physicist Stephen Hawking, died peacefully at his home in the British university city of Cambridge in the early hours of Wednesday. He was 76

"We are deeply saddened that our beloved father passed away today," his children Lucy, Robert and Tim said in a statement.

Hawking's formidable mind probed the very limits of human understanding both in the vastness of space and in the bizarre sub-molecular world of quantum theory, which he said could predict what happens at the beginning and end of time.

His work ranged from the origins of the universe, through the tantalizing prospect of time travel to the mysteries of space's all-consuming black holes.

"He was a great scientist and an extraordinary man whose work and legacy will live on for many years," his family said. "His courage and persistence with his brilliance and humor inspired people across the world."

The power of his intellect contrasted cruelly with the weakness of his body, ravaged by the wasting motor neuron disease he developed at the age of 21.

Hawking was confined for most of his life to a wheelchair. As his condition worsened, he had to resort to speaking through a voice synthesizer and communicating by moving his eyebrows.

The disease spurred him to work harder but also contributed to the collapse of his two marriages, he wrote in a 2013 memoir "My Brief History."

In the book he related how he was first diagnosed: "I felt it was very unfair — why should this happen to me," he wrote.

"At the time, I thought my life was over and that I would never realize the potential I felt I had. But now, 50 years later, I can be quietly satisfied with my life."

Hawking shot to international fame after the 1988 publication of "A Brief History of Time," one of the most complex books ever to achieve mass appeal, which stayed on the Sunday Times best-sellers list for no fewer than 237 weeks.

He said he wrote the book to convey his own excitement over recent discoveries about the universe.

"My original aim was to write a book that would sell on airport bookstalls," he told reporters at the time. "In order to make sure it was understandable I tried the book out on my nurses. I think they understood most of it."

He was particularly proud that the book contains only one mathematical equation — relativity's famous E=MC squared.

"We have lost a colossal mind and a wonderful spirit," said Tim Berners-Lee, the inventor of the World Wide Web. "Rest in peace, Stephen Hawking."

Hawking's popular recognition became such that he appeared as himself on the television show "Star Trek: Next Generation" and his cartoon caricature appeared on "The Simpsons."

A 2014 film, "The Theory of Everything," with Eddie Redmayne playing Hawking, charted the onset of his illness and his early life as the brilliant student grappling with black holes and the concept of time.

Since 1974 he worked extensively on marrying the two cornerstones of modern physics — Einstein's General Theory of Relativity, which concerns gravity and large-scale phenomena, and quantum theory, which covers subatomic particles.

As a result of that research, Hawking proposed a model of the universe based on two concepts of time: "real time," or time as human beings experience it, and quantum theory's "imaginary time," on which the world may really run.

"Imaginary time may sound like science fiction ... but it is a genuine scientific concept," he wrote in a lecture paper.

Real time could be perceived as a horizontal line, he said.

"On the left, one has the past, and on the right, the future. But there's another kind of time in the vertical direction. This is called imaginary time, because it is not the kind of time we normally experience — but in a sense, it is just as real as what we call real time."

In July 2002, Hawking said in a lecture that although his quest was to explain everything, a theory of determinism that would predict the universe in the past and forever in the future probably could not be achieved.

He caused some controversy among biologists when he said he saw computer viruses as a life form, and thus the human race's first act of creation.

"I think it says something about human nature that the only form of life we have created so far is purely destructive," he told a computer forum in Boston. "We've created life in our own image."

He also predicted the development of a race of self-designing human beings, who will use genetic engineering to improve their make-up.

Another major area of his research was into black holes, the regions of space-time where gravity is so strong that nothing, not even light, can escape.

When asked whether God had a place in his work, Hawking once said: "In a way, if we understand the universe, we are in the position of God."

His health, and accidents involving his wheelchair, including one where he broke his hip after crashing into a wall in December 2001 — "the wall won," he observed — led to his appearing in the news for reasons other than his work.

In 2004 he was admitted to hospital in Cambridge suffering from pneumonia and was later transferred to a specialist heart and lung hospital.

He was twice married and divorced.

He married undergraduate Jane Wilde in July 1965 and the couple had three children, Robert, Lucy and Timothy. But Hawking tells in his 2013 memoir how Wilde became more and more depressed as her husband's condition worsened.

"She was worried I was going to die soon and wanted someone who would give her and the children support and marry her when I was gone," he wrote.

Wilde took up with a local musician and gave him a room in the family apartment, Hawking said.

"I would have objected but I too was expecting an early death ...," he said.

He went on: "I became more and more unhappy about the increasingly close relationship between (them). In the end I could stand the situation no longer and in 1990 I moved out to a flat with one of my nurses, Elaine Mason."

He divorced Wilde in 1990 and in 1995 married Mason, whose ex-husband David had designed the electronic voice synthesizer that allowed him to communicate.

"My marriage to Elaine was passionate and tempestuous," he wrote in the memoir. "We had our ups and downs but Elaine's being a nurse saved my life on several occasions."

It also took its emotional toll on her, he noted, and the pair divorced in 2007.

Stephen William Hawking was born on Jan. 8, 1942, to Dr. Frank Hawking, a research biologist in tropical medicine, and his wife Isobel. He grew up in and around London.

After studying physics at Oxford University, he was in his first year of research work at Cambridge when he was diagnosed with motor neuron disease.

"The realization that I had an incurable disease that was likely to kill me in a few years was a bit of a shock," he wrote in his memoir.

But after seeing a boy die of leukemia in a hospital ward, he observed some people were a lot worse off than him and at least the condition didn't make him feel sick.

In fact there were even advantages to being confined to a wheelchair and having to speak through a voice synthesizer.

"I haven't had to lecture or teach undergraduates and I haven't had to sit on tedious and time-consuming committees. So I have been able to devote myself completely to research," he wrote in his memoir.

"I became possibly the best-known scientist in the world. This is partly because scientists, apart from Einstein, are not widely known rock stars, and partly because I fit the stereotype of a disabled genius."

Hawking was Lucasian Professor of Mathematics at Cambridge University from 1979 to 2009 — a post held by Sir Issac Newton over 300 years earlier — wrote countless scientific papers and books, received 12 honorary degrees and was made a Companion of Honor by Queen Elizabeth in June 1989.

To celebrate turning 60, he satisfied a life-long ambition and traveled in a specially created hot air balloon.

He narrated a major segment of the opening ceremony of the London Paralympic Games in August 2012, the year he turned 70.

"I have had a full and satisfying life," he said in his memoir. "I believe that disabled people should concentrate on things that their handicap doesn't prevent them from doing and not regret those they can't do."

He added: "It has been a glorious time to be alive and doing research in theoretical physics. I'm happy if I have added something to our understanding of the universe."