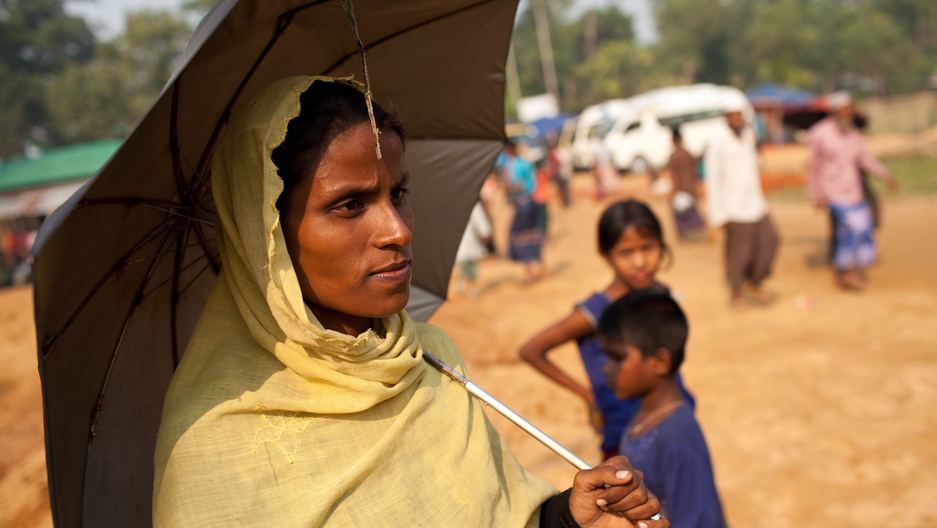 Ayesha Khatun, 22, is nine months pregnant and arrived at Balukhali refugee camp in Cox's Bazar with her in-laws in October. She spoke of her ordeal: "I had to leave home at night, it was raining hard. We had a tarpaulin which we used for shelter. To get here, we walked for six days. We ate only when people gave us food on the way. So far I haven't seen a doctor or taken any medicine."

Rashida’s legs ached. She was nine months pregnant, due to give birth any day, and traveling by foot with her husband and three children. There wasn’t enough food or water to go around. But the 25-year-old saw no other choice but to keep walking; her young family was part of the flood of Rohingya people fleeing their homes in Myanmar amid violence.

But when they reached their destination, nine long days later, at a camp for displaced persons in Bangladesh, things didn’t feel much better.

Rashida's full name isn't being used for her protection and her family's.

"At night, I get scared because we've heard that children are being taken away. There are no doors here, so my husband and I stay up all night so we can keep an eye on the kids,” Rashida told a photographer working with the global aid group, Plan International, shortly after arriving at the settlement in Cox's Bazar last fall. “[We] don't have a candle or a lantern to use, so we just sit in the dark, hoping that everything will be all right.”

Rashida’s situation — and fears — are not uncommon among Rohingya women living in the overcrowded makeshift settlements in Bangladesh. Nearly 20 percent of families included at least one pregnant woman like Rashida, a late 2017 survey found (less than half of those pregnant refugees had received prenatal care). Despite efforts from the Bangladeshi government, nongovernmental organizations and the United Nations, it's a struggle to meet these families’ basic needs. 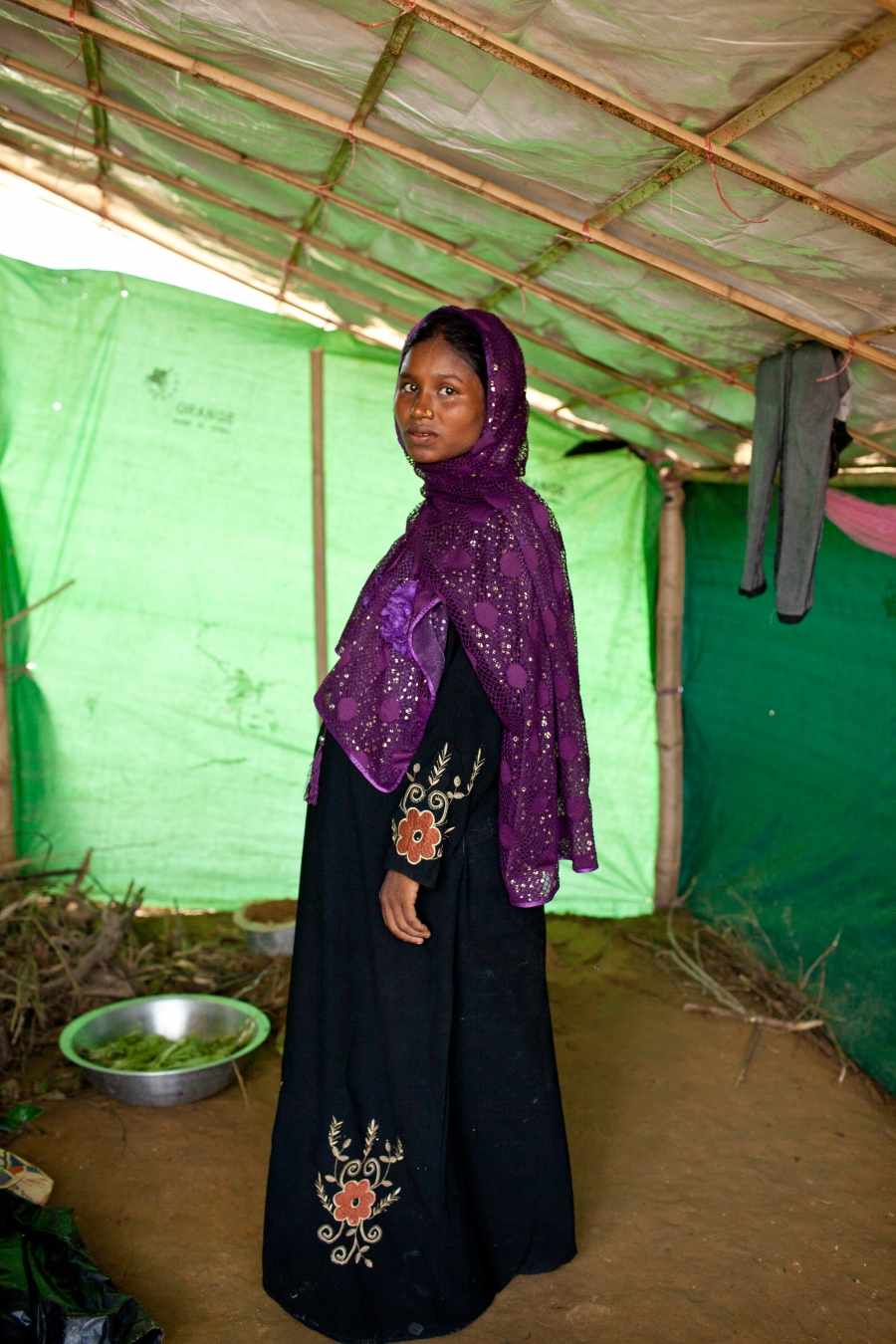 Rashida, 25, is nine months pregnant and due to give birth any day. She arrived at Balukhali camp in Cox's Bazar, Bangladesh, in October with her husband and three children (age 5, 4 and 2).

“It’s an incredibly difficult environment,” Orla Murphy, who has spent time in the camps as Bangladesh country director for Plan International, told PRI. “[Food rations are] comprised of a diet that is rice and lentils, not necessarily a diet that is diversified to support new mothers breastfeeding. The conditions to bring up an infant in a very, very overcrowded camp are challenging.”

Those bleak realities, coupled with a lack of health and trauma services, have made the makeshift camps in Bangladesh one of the world’s toughest for women and girls today, according to an assessment by the International Rescue Committee. The Democratic Republic of the Congo, Niger, South Sudan and Yemen — areas affected by war and displacement — also made IRC’s list.

In these places, the challenges for the female population aren’t limited to access to education, equal pay and other gender-equity issues expected to take center stage as part of the campaign at the center of International Women’s Day’s on Thursday, themed around, “Time is Now: Rural and urban activists transforming women’s lives,” or #TimeisNow. A combination of conflict, gender violence and poverty has created unimaginable conditions for the female population.

“From major cities to remote villages, women and girls worldwide face harassment, violence, discrimination and a lack of equal opportunities,” the IRC report says. “Their lives are threatened, their potential robbed.”

This current crisis in Bangladesh began six months ago after clashes between the Rohingya and Myanmar military turned violent. Hundreds of thousands have since fled a targeted government response that the UN human rights chief has called a “textbook example of ethnic cleansing.”

But in other places included in IRC’s report, the environment has been hostile to women and girls for years. Decades of conflict in the Democratic Republic of Congo have exacerbated high rates of sexual violence. A 2017 study by IRC and Columbia University found that 60 percent of adolescent girls in one province had experienced sexual or emotional abuse in the past year. Girls who are refugees or internally displaced face even greater risks. And while the use of rape as a weapon of the war has been well-documented, experts say it’s important to recognize that domestic and family abuse is a growing problem.

“We know that in conflict, intimate partner violence climbs, as well,” said Ilaria Michelis, an IRC women’s protection expert on DRC. “We don’t want to overshadow the fact that women are unsafe in their own homes on a regular basis.”

Related: As the European migrant trail has gone underground, the threat of sexual violence has increased

The stigma surrounding sexual violence — and societal expectations around familial contributions — have made getting help and addressing the problem more difficult. “While we know violence is a reality for adult women and girls in the DRC, they continue to also be blamed for the violence they experience,” Michelis said. “At the same time, they’re under huge pressure to keep their families alive. There’s a social expectation that women provide for their household.”

High rates of sexual and physical violence against women have also been reported in South Sudan, where IRC found that 65 percent say they’ve experienced one or both. According to IRC, that’s one of the highest rates in the world — and two times the global average. In Niger, another country that made IRC’s list, a child marriage rate around 80 percent and continued threats from Boko Haram, the terrorist group that has kidnapped scores of school girls, are robbing young women of opportunity.

And Yemen, like Bangladesh, is in the throes of a humanitarian crisis that’s put millions of girls and women in harm’s way. A lack of basic rights and independence has made navigating the deteriorating environment even more difficult for women.

Addressing the scope and severity of the conditions won’t be easy — an influx of funding, legal protections, societal changes, and, at the most basic level, peace — are needed to build the foundation of change. But even keeping international attention — and a sense of urgency — surrounding these atrocities is difficult given all the chaos in the world today, advocates say.

“South Sudan has been experiencing violence for so long. [People] sometimes think it’s old news ... but it’s not,” said Sophia Wanjiku, an IRC women’s protection expert on South Sudan. “The impact on women and girls is fresh every day.

In the meantime, groups like IRC and Plan International are on the ground, providing humanitarian aid, training, counseling services and more. Those efforts range from major basic infrastructure work like building classrooms and digging wells in Niger to providing medical supplies and training in Yemen, which has also been devastated by a cholera outbreak. In Bangladesh, Plan International also distributed menstrual supply kits and solar headlamps to young Rhoyinga women scared to venture out to latrines at night.

That effort highlights a commitment to serving the changing needs of teen girls, which often differ vastly from their adult peers. “One thing when you’re walking around the camps that’s really visible is you don’t see adolescent girls,” Murphy explained. “Young girls who live a more closeted life in Myanmar once they reach puberty are now in this very, very crowded environment not having the confidence and the social space to move freely.”

Advocates worry the conditions for women in those camps may worsen in the weeks and months ahead. Safe return to Myanmar remains a goal for many, but there are few signs that will happen anytime soon (repatriation efforts supported by the Bangladesh government were postponed in January due to ongoing concerns for safety). And in the meantime, the threat of landslides and floods from the impending monsoon season looms over relief efforts. While demand for significant aid is urgent, experts say it’s important that responses don’t underestimate one basic element: the need to ask — listen to — girls and women about their unique needs in times of crisis.

“With this very confined space, just even hearing the voice of women and young girls is a challenge,” Murphy said. “We need to create women-friendly spaces and safe environments where women can come together look at their future and voice how they’re going to support the realization of what their forward dreams are. Everybody does have dreams.”