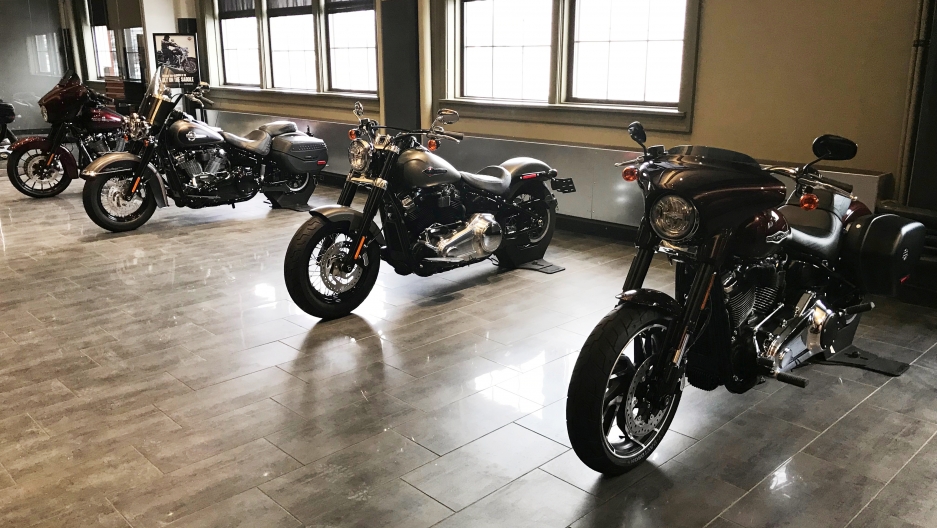 Harley-Davidson motorcycles on display at the company’s headquarters in Milwaukee, Wisconsin. An EPA penalty of $15 million for selling emissions defeat devices was decreased by $3 million under the Trump administration in December 2017.

In 2008, Harley-Davidson started selling the Screamin' Eagle line of motorcycle tuners. The small, neon-orange box, when put on a regular motorcycle, allowed owners to “tune” the efficiency of their bikes, making them louder, faster and more powerful. But it also caused the motorcycles to emit more pollution than Environmental Protection Agency regulations allowed, and in August 2016, Harley-Davidson agreed to pay $15 million in fines and buy back all 340,000 Screamin’ Eagle tuners from consumers. Last August, under EPA director Scott Pruitt, that penalty was quietly decreased by $3 million — removing a requirement to work with the American Lung Association to mitigate pollution.

The revised Harley-Davidson settlement is just one example of how the EPA under President Donald Trump is pursuing fewer cases and smaller fines. According to a new report from the Environmental Integrity Project (EIP), fines collected by the EPA from polluters in 2017 summed up to less than one-half of the amount collected during the first year of the Obama administration.

A total of $30 million in penalties were charged by the EPA in the 12 months following Trump’s inauguration. During the same time period, the Obama administration issued $81 million in penalties, when adjusted for inflation.
Under the first year of the Trump administration, the largest penalty was a $6.5 million fine against Starkist, the world's largest supplier of tuna, for polluting Pago Pago Harbor in American Samoa. A broken pipeline in 2014 prompted investigations by the EPA.

Under the Obama administration, the largest penalty in the first year was $12 million against British Petroleum; $9 million under Bush against Motiva, Equilon and Shell; and $11.1 million under Clinton against Louisiana Pacific, Inc. and Kirby Forest Industries.

“We’re seeing a pretty substantial drop in the big civil enforcement actions, the ones that people read about in the paper,” said Eric Schaeffer, head of the EIP and former director of the EPA’s Office of Civil Enforcement from 1997-2002.

Schaeffer resigned during the Bush administration.

Big cases against refineries, power plants, cement kilns and auto companies have declined, he said, and those contribute a lot of pollution to the environment.

Even in previous administrations, Schaeffer says that fines were inadequate.

“To me, for some of these violations, they’re never really high enough,” Schaeffer said.

The study also shows that the total number of cases against polluters pursued by the Environmental Protection Agency in the past 12 months is lower than under the Obama, Bush, and Clinton administrations during the same time period. There were approximately 50 percent fewer cases than the average of the prior three administrations.

“The Trump administration is not only bringing in fewer enforcement cases, they're also prosecuting those cases less vigorously,” said Zak Griefen, a senior enforcement litigator at the Conservation Law Foundation.

Cases often take months to complete, so many of the cases that were settled in the first year of the Trump presidency were started during the Obama administration. The EPA has also reversed some of the settlements made under Obama — removing penalties and lessening fines. In addition to the revised case against Harley Davidson, a fine against agribusiness company Syngenta was dramatically decreased from $4.9 million under Obama to just over $500,000 under Trump.

Griefen notes that even under prior administrations, environmental rules were not being fully enforced.

“There was a need for citizens to step in and enforce environmental laws ever since those laws went into effect,” he said. “It’s a much greater need now, the breach in which we need to step is larger under this administration, but it’s not true that the laws were being fully enforced under the prior administration.”

In the first three months of FY 2018, there were 55 prosecutions, but only 16 were led by the EPA. The Department of the Interior led with 23 investigations, and the Department of Agriculture pursued 11 cases.

“There are fewer prosecutions,” said Sue Long, director of the TRAC Research Center. “Now, if there are fewer environmental violations, and there really isn’t any problem with the clean air and water, it could reflect that.”

But according to historical patterns, Long says that it is unlikely that the decrease in prosecutions was caused by less pollution.

“In general there are typically many, many more violations than the federal government has resources to take somebody to court,” Long said. “They’re devoting less resources in this area.”

The EIP report included 15 case studies of manufacturing sites out of several hundred with ongoing violations of the Clean Air Act. Most sites were based in the Midwest, with six in Ohio, four in Minnesota, two in Illinois and one in Indiana.

The amount of pollutants measured at the sites far exceeded the accepted levels. A refinery in  St. Paul, Minnesota was found to release 13 times more hydrogen sulfide than its permit allowed. The pollutant is known to contribute to asthma and other respiratory diseases and can increase the risk of heart disease and premature death. An estimated 10,570 people lived within three miles of the plant and could be affected by the pollutant.

“Those are cases that should move quickly,” Schaeffer said. “You should hear a loud clock ticking, once you know that this is not air people should be breathing.”

The EPA did not respond to PRI’s request for comment.