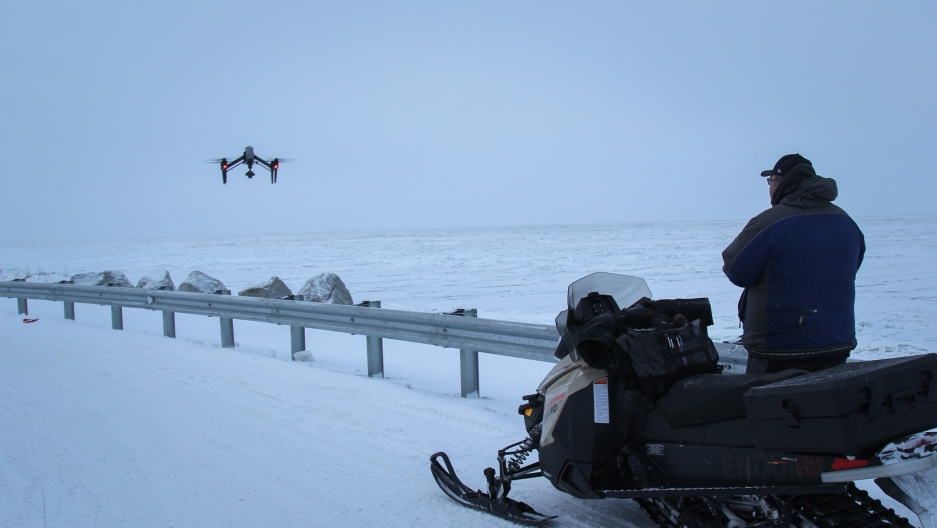 Subsistence hunter Dennis Davis sends his drone out over the ice on the Chukchi Sea in Shishmaref in far-western Alaska. Warming winters have made the sea ice here more dangerous to navigate in search of seals and walruses, but drones can help map the best route to the ice edge.

Minus 8 degrees. That was the temperature one recent day in Shishmaref in far-western Alaska — frigid for most of us, but pretty good for Dennis Davis, because minus 8 means good ice formation on the Chukchi Sea surrounding his tiny island community near the Bering Strait.

Like his neighbors in this Native community, Davis needs to get out to the ice edge to hunt the marine mammals his family depends on for food. But the weather early this winter was warm and the ice was late in coming, which created a dangerous patchwork extending from the town’s seawall on toward the horizon.

So to get a better sense of what’s out there, Davis carefully set up a delicate piece of equipment definitely unknown to his Inupiaq forebears: his drone.

It’s a serious machine, about the size of a microwave, with a high-quality camera mounted under four buzzing propellers. Davis plugs his iPhone into the controller, sends the device speeding out over the ice and looks down at his screen, scanning for different colors in the ice.

“What you want is more of the bluer ice, like this ice out here,” he says, pointing at the image on his screen. Davis says blue ice is more solid than white, so hunters can travel over it more safely on their snow machines as they set off to find walrus and seals.

Subsistence hunters here have always closely watched the ice conditions, but the drone can scout a lot farther and faster than the naked eye. That’s becoming more important as climate change causes the Arctic to warm up rapidly and the once-dependable yearly rhythms of sea ice become less predictable.

The ice is generally forming late, remaining thin, and breaking apart earlier, but Davis says his drone can help map the safest route across it, “to more or less set a course for everybody when they go out hunting, instead of having to go out and just mess around on the ice.

Smelts, set out to dry in the coastal town of Shishmaref, are just one of the many species of animals families rely on in Alaska's traditional native villages.

The drone is just one way hunters in Shishmaref are adapting to changing conditions. For Davis, it means changing not just how he hunts, but what he hunts. Traditionally, locals relied more heavily on marine mammals. Those are still plentiful, according to one recent study, but the bad conditions are making it harder to hunt them.

On the other hand, residents say they’re seeing more caribou over the last few decades. Salmon returns in the region are also booming. And musk oxen, reintroduced 50 years ago after being wiped out in Alaska, are steadily working their way back into people’s diets. Which is just fine by Davis, since it’s one of his favorites to cook for his wife and seven kids.

“I compare musk ox to like wagyu beef, because it’s so marbled, it’s really, really good,” Davis says as he fries musk ox burgers on his stove back home.

Musk ox burgers, cooked up by Dennis Davis for his wife and seven kids. Davis says musk oxen are a reliable source of protien in a time when some other animals are becoming harder to hunt. He also says they're especially delicious.

Davis loves to cook almost as much as he loves to eat, but his subsistence lifestyle isn’t just a culinary hobby. It’s a necessity in this remote part of the world, and it always has been. By the time dinner is done, his family has eaten eight pounds of meat. At the store, that much ground beef would have cost up to $70, way too much for many families in a place where jobs and cash are scarce.

And Davis says musk oxen have become a relatively reliable source of meat because they’re so easy to hunt.

“You know where they’re at,” he says. “You know how they behave. They’re not going anywhere. They just stay in the same spot.”

That consistency is a big relief for people in a region where environmental conditions are changing fast.

Nayokpuk is 65 and has seen plenty of shifts in the climate and the animals around Shishmaref, some good, some bad. Fewer polar bears, for instance, but more caribou.

He says this year’s freeze-up (the first day each year when the ocean is completely covered in ice) is the latest he remembers, and the unpredictable weather worries him. But Arctic environments have always been some of the most inhospitable on Earth, and Nayokpuk’s encouraged that younger hunters are constantly adapting.

“We’ve always been hunters here,” Nayokpuk says. “We hunt regardless of the situation."

Percy Nayokpuk behind the counter at his store in Shishmaref. He says hunting conditions have changed a lot in his 65 years, but he's encouraged that younger hunters are adapting to new conditions. “We’ve always been hunters here,” Nayokpuk says. “We hunt regardless of the situation.”

For those with a bird’s-eye view on subsistence in Alaska, that pragmatism brings some optimism.

“It’s positive in my mind that our people are able to adapt. And they’re doing so,” says Brandon Ahmasuk, who oversees subsistence resources for Kawerak, a nonprofit in the regional hub of Nome that works with small communities like Shishmaref.

“They’re still gonna make it happen because they have to," Ahmasuk says. "They have to put food on the table."

His big worry is longer term. The climate in Alaska will keep warming for as far into the future as anyone can see, and no one knows how much change the animals here can adapt to. Some warning signs are already showing up.

But as long as the animals are healthy, Ahmasuk says he’s optimistic that people in the region will keep finding ways to live off them, like they always have.

Reporting for this story was supported by the Marguerite Casey Foundation.