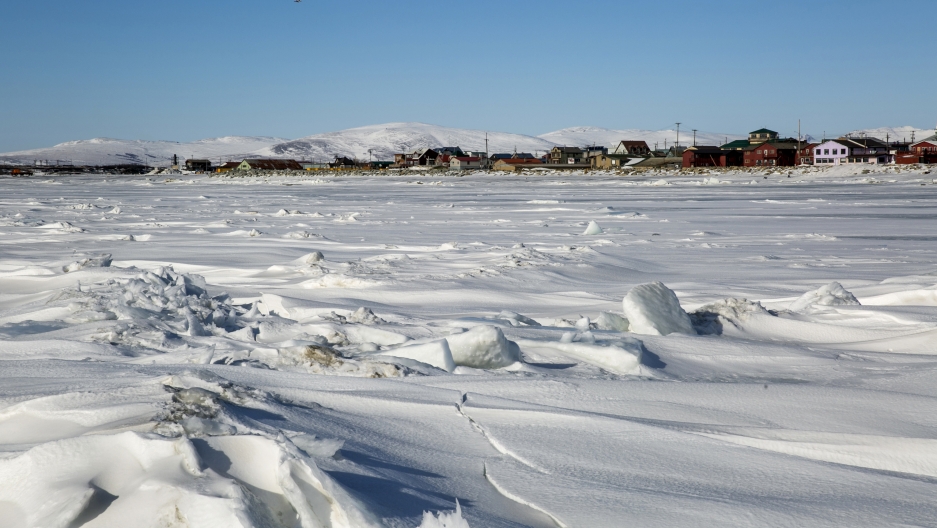 A frozen beach on the Bering Sea coast is seen near the last stretch mushers must pass before the finish line of the Iditarod dog sled race in Nome, Alaska, March 11, 2014.

The Bering Sea has lost roughly half its sea ice over the past two weeks and has more open water than ever measured at this time of year.

“This is unprecedented,” said Brain Brettschneider, a climate researcher at the University of Alaska Fairbanks. “The amount of ice is less than it’s ever been during the satellite era on any date between mid-January and early May.”

This comes as much of western Alaska, including places like Saint Paul Island and Utqiaġvik, formerly known as Barrow, is in the midst of its warmest winter in recorded history.

The community of Umiat measured unofficial temperatures 45 degrees Fahrenheit above normal on Tuesday, according to Rick Thoman, a National Weather Service meteorologist in Alaska.

These kinds of temperatures cause melt in the permafrost and “change the identity” of Alaska, Brettschneider said.

A lack of sea ice around the western edge of Alaska leaves the coastline open to the battering energy of storms rolling in from the Bering Sea.

“The sea ice along the coast really protects the shoreline,” Brettschneider said. “So when you lose that ice, (the land) becomes highly susceptible to severe erosion.”

A Facebook video posted Tuesday from Diomede, Alaska, on the far western tip of the state, shows huge waves crashing into a small building on the rocky coast.

The Native Alaskan village of Kivalina, one of the first communities in the US expected to relocate due to climate change, is being impacted by that kind of erosion.

Warm temperatures in high latitudes ultimately don't just affect Alaskans or others who live near the poles.

The temperature differential between the poles and tropics create the jet stream, which drives weather patterns in the northern hemisphere.

“When you have a warmer Arctic, you lessen the thermal gradient across from the equator to the Arctic, and that changes where low pressure patterns set up,” Brettschneider said. “There’s this whole cascading set of impacts that affect the entire hemisphere, and in fact the entire globe, when you heat up the Arctic."