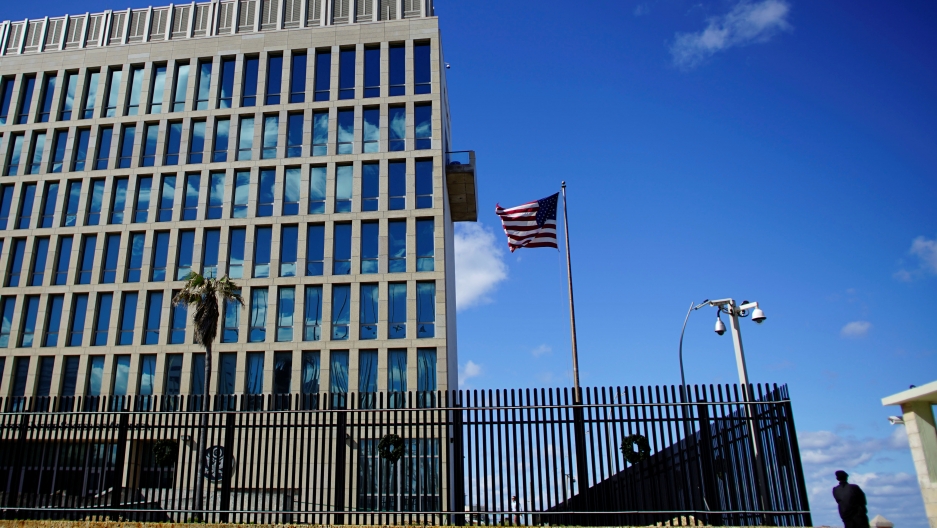 A guard stands outside the US embassy in Havana in December 2017.

It’s a mystery fit for a Cold War-era spy novel. In late 2016, officials with the US embassy in Havana started hearing strange noises that seemed to be directed right at their homes or hotel rooms.

Most called it a high-pitched sound. Some said it sounded like grinding metal, while others compared it to a kind of hum. Many said they felt pressure changes too, like the feeling of driving down a highway with only one car window open.

After hearing the sounds, some US personnel in Cuba started feeling sick, reporting headaches, hearing impairment and issues with cognition and balance.

Early last year, as word started spreading about the sounds and symptoms, around 80 Americans in Cuba were worried enough to get checked out by a doctor flown into Havana for that purpose.

By last summer, 24 US personnel had been diagnosed with mild traumatic brain injury. In July, State Department officials said they believed a “nonnatural” source caused the trauma, but they didn’t know much else.

Months after their exposure, the patients “weren’t getting better; they weren’t going back to work; they were still having a lot of symptoms, and nobody had been able to figure out what was going on,” says Dr. Sean Grady, chairman of the neurosurgery department at the University of Pennsylvania’s medical school.

Speculation about the cause of the illness ran rampant. Was it some kind of sonic attack with an unknown weapon? Was it triggered by stress, a kind of reverse placebo effect among the tight-knit embassy community?

More than a year after the strange sounds started, US intelligence officials still don’t seem to have many answers.

But doctors recruited by the State Department to examine the American patients are getting closer to solving the medical side of the mystery.

Starting in August, a multidisciplinary team of specialists at the University of Pennsylvania examined 21 of the 24 Americans diagnosed with mild traumatic brain injury. It was an average of seven months after most reported exposure to sounds or pressure changes, and their symptoms were still severe.

“There were several cases that were really physically disabling,” says Grady, who helped oversee the neurological tests. “They had difficulty getting their eyes to focus, trouble with concentration and memory and headaches when they engaged in tasks and balance difficulties. And these are all younger individuals.”

Three of the patients had so much hearing damage they needed hearing aids. Fifteen had to take drugs to help them sleep.

The medical team published their findings last week in the Journal of the American Medical Association.

“We found that it was really a concussion without concussion; it just so much appeared like persistent concussion symptoms without that normal history of a head impact,” says Dr. Douglas Smith, who directs the Center for Brain Injury and Repair at the University of Pennsylvania and was tapped by US government officials to assemble a team to examine the patients.

The beginning of a new clinical diagnosis?

Smith believes his team may be documenting an entirely new type of syndrome, marked by brain network symptoms classic to a concussion but caused by something other than a blow to the head.

By the time the team had finished documenting patient symptoms in September, their cause was still a mystery.

But the stranger-than-fiction scenario had already taken its toll on US-Cuba diplomatic relations. In late September, the Trump administration announced it was removing all nonessential staff from the American embassy in Cuba.

Tensions continue to simmer as US intelligence agencies try to figure out what happened, Cuban officials maintain they know nothing about the attacks, and politicians like Sen. Marco Rubio insist that they do.

With few real answers, there's rampant speculation about what might be causing the concussionlike symptoms.

Doctors say it’s not the sound that Americans heard.

One theory suggests that some type of sonic weapon using sound outside the audible range was targeted at the Americans, and the noise they heard was just a byproduct of the device. So far, The Associated Press reports the FBI has found no evidence that happened.

Another theory is that symptoms stem from a kind of collective stress response.

A few Americans heard an unfamiliar noise — maybe just cicadas — and thought it was making them sick. Through the power of suggestion, dozens of others started feeling symptoms, too.

That’s reportedly the conclusion that a panel of Cuban scientists reached in December.

But after his team’s evaluations, Smith doesn’t buy it.

“There’d have to be almost like a grand conspiracy to go and research what concussions symptoms look like, come before a group of experts and convince each one that they had an issue,” Smith says, “and that’s including going through some tests that you can’t fake. So while I won’t completely rule it out, it just does not seem like a high possibility.”

A third theory is that a virus or poison is to blame. Smith doesn’t think that’s the cause, either. Signs of viral infection, like fever, didn’t accompany the neurological symptoms, and in some cases, those symptoms started within a day of patients’ arrival in Havana.

Report has details, but few answers

The newly published journal article provides the most detailed look so far at the physical symptoms the US officials experienced, but the withholding of key patient details for privacy and security reasons make it more difficult for the results to be independently evaluated.

“I think the lack of some of the demographic data just makes it more difficult to interpret the findings of the study,” explains Steven Lewis, chief of neurology at the Lehigh Valley Health Network in Allentown, Pennsylvania, and co-author of an editorial published alongside the recent JAMA article.

Lewis argues it’s too soon to rule out any potential causes of the brain injuries.

“It is a mystery and we need more information, and unfortunately, the findings from this study provide data but really no answers yet,” Lewis says.

Doctors at the University of Pennsylvania hope they’ll have more information soon. Right now, Sean Grady says they’re analyzing the results of a special type of brain scan that typically reveals damage to the wiring of the brain in concussion patients.

“If we’re going to find imaging evidence of problems, that’s where we’ll find it,” he says.

If they do, Grady says those results would allow them to go back to the lab and try to replicate the results.

In a mystery where every possible explanation seems unlikely, a little hard science might be the only hope of cracking the case.