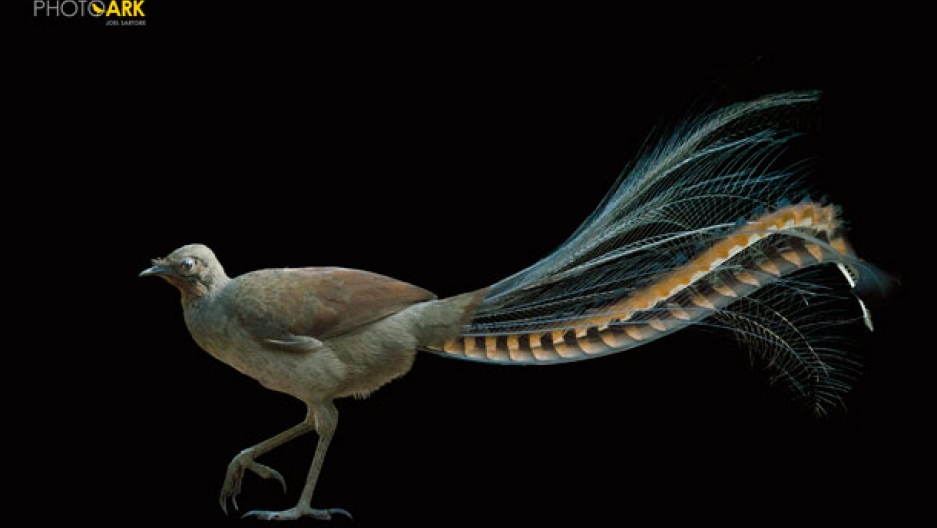 Australia’s lyrebird is a masterful mimic. To attract a mate, a male riffs on the calls of other birds in the forest while shaking its splendid tail feathers overhead. Captive birds have been recorded imitating the sounds of chain saws, car alarms and camera shutters.

National Geographic, the National Audubon Society and other conservation groups have declared 2018 the Year of The Bird to celebrate the centennial of the Migratory Bird Treaty Act.

To help kick off the celebration, novelist and National Geographic writer Jonathan Franzen wrote a cover story, Why Birds Matter, for the magazine’s January issue. Franzen says a walk in New York City’s Central Park opened his eyes to the pleasures of birdwatching.

He had walked in Central Park nearly every day for years and thought he knew it like the back of his hand, he says. Then a couple of friends stuck binoculars in his hand, walked through the park with him and started pointing out all the birds he had never noticed before. The next four hours was a series of “Are you kidding me?” moments, Franzen says.

“We saw maybe 60, 70 species of birds in one afternoon,” he explains. “It was a brilliant May weekend and all the birds were coming through. I had the sense I hadn't had since high school, when I realized what people were talking about when they talked about sex — like, ‘Oh, now I get it.’ There was this huge hidden dimension to the world that was suddenly visible to me, and all I had to do to find out more about it was to go out by myself with binoculars.”

In his National Geographic article, Franzen makes many cases for why birds matter. First, they are indicators of the health of natural ecosystems. “If you go to an area that once was full of birds and you can't find any birds, it probably means there's something very wrong with the ecosystem,” he says. Birds also excel at rodent and insect control and they are great pollinators and seed distributors, Franzen adds.

But perhaps an argument even stronger than being vital to the world’s ecosystems, Franzen says, is that birds are “a singular instance of nature.”

“They have been world-dominating creatures for 65 million years,” he says. “They are this brilliant adaptation of the original dinosaurs. They are feathered, flying dinosaurs that managed to escape the big extinction event 65 million years ago and populate the entire world, and even now they are more widespread than any other kind of creature, including human beings. They're out in the middle of the most remote ocean, they're in the driest desert, they're in Antarctica in winter. If you care about the natural world that we came out of, you ought to respect these creatures that were the great thing that happened before human beings came along.”

Now, in the 21st century, one of the biggest threat to birds, and to wildlife in general, is loss and fragmentation of habitat, Franzen points out. But, shockingly, he says, the number one threat after habitat loss is outdoor cats. “The reliable scientific estimates of the toll on North American birds — just US birds in a single year — is phenomenal. It's on the order of one to three billion birds every year being taken by feral and free-running cats.”

Another worry is collisions with human-made structures, which are difficult to eliminate but can be mitigated. The toll is particularly high in cities with skyscrapers whose lights attract birds. Some good initiatives are in the works to get cities to black out their tall buildings during critical migration times, Franzen says.

The third major threat appears to be agriculture and pesticides. Franzen says it’s worrisome that Environmental Protection Agency Administrator Scott Pruitt has not followed through on banning a class of pesticides that numerous studies have shown to be harmful to birds and insects. “There's been a tremendous decline in birds that depend on open land — grassland birds and things like whippoorwills that feed on insects above open fields — with the pesticides being the likely culprit for those declines,” he says.

So, during this Year of the Bird, what can the average person do to help protect them?

“In a way, it doesn't matter what you do, as long as you do something,” Franzen says. “If all you do is pick up trash or help build predator-proof fences down at the local Audubon reserve or help remove invasive plants from a wetland or contribute to some of the organizations that have the resources to do larger-scale conservation work, that's a great thing.”

“In a very practical way,” he adds, “you can write your representative right now and say, ‘Don't mess with the Migratory Bird Treaty Act,’ which is under threat in the current Congress and by the Department of Interior, which wants to basically defang that law and make it okay to kill birds without having to pay any consequences.”

“The worst thing is to just ignore it,” he advises, “because once you pay attention, you might fall in love, and once you fall in love, then you have to do something.”