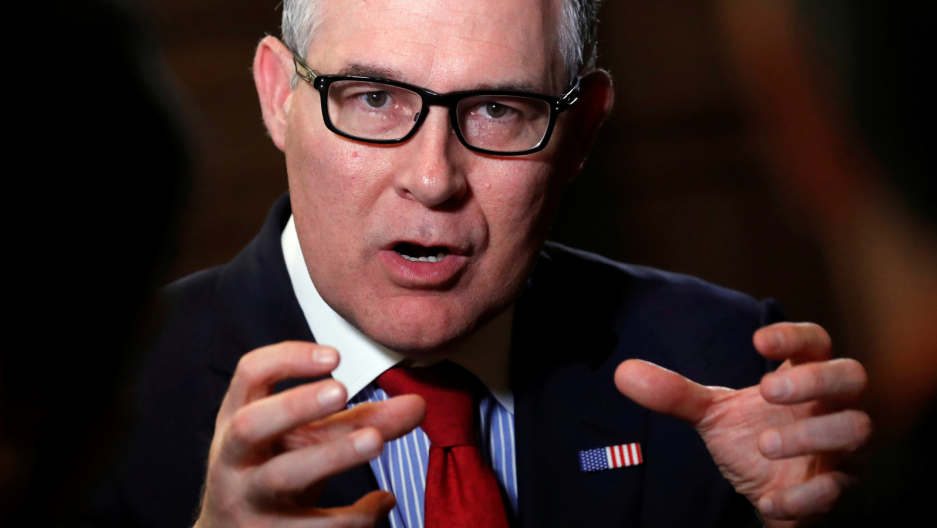 Since assuming leadership of the US Environmental Protection Agency (EPA) last February, Scott Pruitt has found himself at odds with environmental organizations, community advocates, farmers and, increasingly, lawmakers.

Just last week, Cory Booker (D-NJ) confronted Pruitt in a Senate hearing about his recent efforts to roll back regulations that set a minimum age for farmworkers who handle pesticides. The rules include requirements for a minimum age of 18 for applying pesticides and for buffer zones around pesticide-spraying equipment. Booker said he feared that the rollback would have a “disproportionate impact on low-income folks and minorities.”

Booker’s concerns mirror many aired by others invested in the country’s environmental policies. Pruitt has made wholesale changes to the EPA over the last year, and his impact on food and farming have been no less sparing. His rollbacks of Obama-era regulations on pesticides, water safety and farm runoff and close alignment with the seed and chemical industry has caused deep concern for both advocates and scientists. And as Pruitt’s EPA marches forward in rolling back or delaying environmental protections, many longtime staffers are opting to leave the agency they’ve supported for decades rather than supporting his agenda.

“This EPA is not interested in protecting people from harmful pesticides,” says Karen Perry Stillerman, a senior analyst at the advocacy group Union of Concerned Scientists. “It’s more interested in bowing to the wishes of Dow [Agrochemical].”

Before his tenure at the EPA, Pruitt infamously sued the agency 14 times. While most of those lawsuits were focused on preventing new regulations to limit carbon and mercury pollution from power plants, his approach to ending regulation has remained constant throughout.

In November 2016, he signed on to a lawsuit against the Waters of the United States rule (WOTUS), which details which bodies of water are regulated under the federal Clean Water Act, and was updated and expanded with the 2015 Clean Water Rule.

As EPA chief, Pruitt has worked quickly to stop implementation of the rule, which many conventional farm and industry groups have opposed, arguing that it is an example of the agency’s overreach. In June, the EPA began its efforts to rescind the rule, and last month the Supreme Court ruled that challenges to WOTUS would be sent back to federal district courts, several of which have issued stays against implementing the rule. Then, Pruitt responded last week by announcing a two-year delay in implementing WOTUS while his EPA works to repeal and replace it.

Pruitt rejected the EPA’s own scientists’ recommendation to ban the insecticide chlorpyrifos after years of internal and external research on the pesticide’s potentially harmful health effects. The chemical was banned in 2000 for household use, but is still used in some commercial farming. A New York Times investigation found that new EPA staff appointed by Trump had pushed career employees to shift the agency’s position on the chemical, and in early February Pruitt noted he would also urge the federal Marine Fisheries Service to also reconsider its findings that chlorpyrifos threatens fish species. A number of states have sued the agency in an effort to force it to implement the ban; California has also moved to ban the chemical’s use in the state in hopes of skirting the EPA’s inaction.

Pruitt has defended his deregulatory efforts, saying they’re in the interest of “cooperative federalism.” In his view, this type of deregulation empowers the states to take on more regulatory responsibility, while preventing the overreach of federal agencies.

Among advocates, anger at changes and the status quo

Many agriculture and environment advocates don’t think Pruitt’s deregulatory efforts will improve the working relationship between the federal government and the states. John O’Grady, president of the American Federation of Government Employees National Council #238, which represents over 1,000 EPA employees, says “we’ve been doing cooperative federalism for years.” But “this administration is kind of twisting it” to justify incorporating direct input from more corporations and to defund environmental regulatory work that has been happening in the states, he says.

Pruitt has supported Trump’s budget proposals, which would cut 20 percent of the funding states rely on for staffing and environmental program work, such as one program established in 2009 to restore and clean up contamination — from agriculture and other sources — in the Chesapeake Bay. More environmental regulations have been targeted for rollback than in any other sector.

And despite his stated interest in diffuse governance, Pruitt is reportedly keeping a tight rein on the EPA’s ongoing work. Michele Merkel, co-director of Food & Water Watch’s Food & Water Justice program, and Tarah Heinzen, a staff attorney of the program, note that since many top positions at EPA remain unfilled, much of the agency’s business is flowing through Pruitt himself. Heinzen says that, consequently, there is “far less autonomy at the regional level,” and that state agencies are finding it challenging “to even gather information.”

Conventional agriculture groups, however, are mostly in agreement with the newly defined priorities of Pruitt’s EPA. When Pruitt addressed meetings of the American Farm Bureau Federation and the National Cattlemen’s Beef Association in early 2017, he was reportedly given standing ovations. Others say it is still too early to tell whether the changing priorities of this EPA will dramatically affect the relationship between the EPA and farmers.

On the one hand, the biggest players in the “[agriculture] industry have always had the EPA pretty captured,” says Merkel. Indeed, EPA’s regulatory trends have shown a shift toward more self-regulation in the agribusiness sector. There has also been a decline in the number of inspections and enforcement actions by the agency against concentrated animal feeding operations (CAFOs) since the final years of the Obama administration.

And while many farmers have traditionally had an antagonistic relationship with the agency, Tom Driscoll of the National Farmers Union says the idea that farmers have a “knee-jerk distrust of EPA is a bit overstated.” He adds that the farmers he works with are “invested in a clean and healthy environment” and many farmers are still hoping to work with the EPA toward better conservation practices.

Plummeting morale inside the agency

Between April and December, 770 employees left the EPA, many taking buyouts and early retirements. O’Grady says that some of these departures could be unrelated to the political environment. But, he says, some could be “related to people being disgusted with the program that this [administration] is putting in place.” Regardless of their reasons for leaving, many are not being replaced — barely one-third of the 624 EPA positions that require Congressional confirmation have been filled, with another third sitting vacant with no nominees.

Other EPA employees have gone to the media or other forums to speak out against the current administration — but not without consequence. Several employees who’ve spoken out publicly against the recent actions of the EPA have had their emails scrutinized. Many reports suggest that the internal staff morale is low. While the administration fears information leaks, many employees fear the agency will retaliate without proof if they are suspected of leaking information.

Pruitt has repeatedly condemned the EPA under Obama for treating states and industry as “adversaries,” preferring to see them as “partners.” That philosophy has translated into bringing many former industry representatives in to fill major EPA roles.

A November 2017 Center for Public Integrity investigation into 46 political appointees at the EPA found that the majority had worked for either an organization with a history of climate change denial or an industry commonly regulated by the agency. The appointees include a former senior director of the American Chemistry Council (whose members include Dow, Monsanto and Bayer), former senior counsel at the American Petroleum Institute and former legislative affairs director for the National Association of Chemical Distributors.

And the appointees go beyond the agriculture and energy industries. In May, Pruitt appointed his friend and personal banker, Albert Kelly, to lead the new Superfund Task Force. Just two weeks prior, Kelly had been fined by the Federal Deposit Insurance Corporation for financial misdeeds that resulted in his being banned from rejoining the banking industry by the FDIC.

Pruitt has also reportedly spent much more of his time in meetings with industry reps than environmental organizations or citizen groups. A trove of documents detailing his schedule during his first three months at the helm of the agency show dozens of meetings with or travel to events sponsored by General Motors, Shell Oil executives, CropLife America, the National Association of Manufacturers, the Cement Association and the National Mining Association. Meanwhile, between March and September, Pruitt met with just five environmental groups.

Some of Pruitt’s deregulatory actions, particularly those targeted at Obama-era executive orders, could only last for a short while if they were soon overturned by a new administration. But others, like unwinding WOTUS, would take years of litigation and rulemaking to get back to where the Obama administration left off.

And staff at EPA could also prove hard to replace. John O’Grady points out that the agency has shrunk from 18,000 employees in 1999 to around 14,500 today, and he predicts the Trump administration will cut several thousand more jobs. After all the cuts, “there’s still the same amount of work,” he says. The staff that remain at EPA “are dedicated, they’re trying to get the work done.” But as morale falls, many are burning out. And those who stay must face an agency that seeks to unwind decades of its own efforts to fight climate change, regulate harmful chemicals, and protect the country’s waterways.