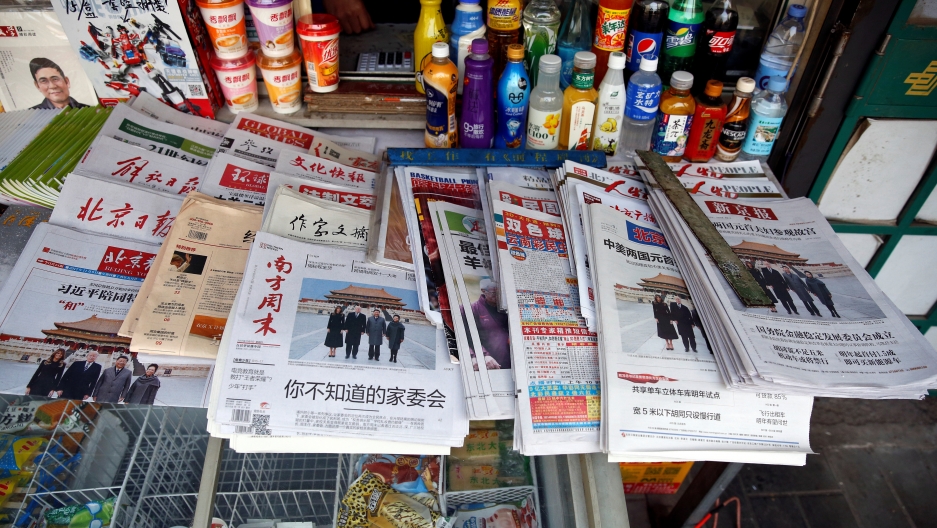 Chinese newspapers featuring a picture of US President Donald Trump and US first lady Melania visiting the Forbidden City with China's President Xi Jinping and China's First Lady Peng Liyuan on the front page are seen at a newsstand in Beijing, China Nov. 9, 2017

Chinese state media often hypes American problems and foibles to redirect attention away from China’s poor human rights records. And yet, when it comes to American gun violence, it takes a measured tone.

After Wednesday’s school shooting in Florida, which killed 17 people, China's official news agency Xinhua wrote, "A schoolyard again faces a nightmare shooting incident. American society's 'gunshot wound' will be difficult to heal." The Shanghai website The Paper described the shooter as a "problem child who likes to brandish knives and play with guns," while China Business Network, a financial publication, outlined the frequency of shootings. (According to the New York Times after Florida, three out of 10 of the deadliest mass shootings in recent U.S. history are from the last five months.) Even the tabloid Global Times, often a fan of hysteria, published an editorial many American liberals would find reasonable after the November 2017 slaughter of more than two dozen people in a Texas church.

“The fecklessness of the entire American system in the face of frequent shootings is truly something the entire world feels is unbelievable,” it wrote. “We are surprised by the American public’s good temper, as they must endure the risk of suddenly getting gunned down.”

Chinese propaganda outlets are not known for their truthiness. When it comes to things like America’s policy towards China, Chinese state media often relies on misleading phrases like “containing China,” or “Cold-War mentality” to blame America for tensions in the bilateral relationship, and accuses America of unfounded paranoia about the strength of China’s rise.

China's state media love covering American shootings. Who can blame them? Here's a graphic from the People's Daily, China's best known propaganda newspaper, on the costs in 2017 of American gun violence. Spoiler alert: the costs are high. https://t.co/oUmX37WbRo pic.twitter.com/oKTyjF4kYj

They are especially misleading on issues touching on human rights. In March 2017, in response to American criticism of China’s human rights situation, Beijing issued a report on American human rights abuses. The report — which criticized America for its high prisoner population, social polarization and racial discrimination — reads hypocritically because many of what Beijing criticized is an equal or greater problem in China than America. In Xinjiang, for example, a vast region in China’s far west, the Uighur people live an apartheid-like existence. The one major exception to that is gun violence. Like with most people around the world, Chinese face a much smaller chance of gun murder than Americans.

Private handgun ownership is nearly nonexistent in China. There is a Chinese expression, “Above there is laws, and below there are ways of skirting the laws,” a reference to a system where it really feels many of the laws are meant to be broken. Prostitution is both illegal and common, tax evasion remains rife, jaywalking is so ubiquitous it makes New York City feel like Singapore, and, on a trip I took to Beijing in August 2017 — nearly five years into Xi Jinping’s sweeping anti-corruption campaign — I saw that African drug dealers still lingered around the popular tourist neighborhood Sanlitun, offering cocaine and hashish.

Related: The 'most popular rifle in America' was used in the country's latest shooting

And yet, guns are an exception. Outside of some agricultural areas, they are nearly impossible for private Chinese citizens to obtain. The litany of questions Chinese people asked me about being American would often include some version of “Do Americans really have guns?” It surprised them to hear the answer was yes. In my six years living in China, I never once heard a rumor about someone unconnected to the military, security, or the party possessing a handgun or an assault weapon, and never even heard of ways to purchase one.

And while China not infrequently suffers from mass attacks, the difficulty in getting a gun or a bomb in China means the casualties are mostly limited to the unlucky few who get stabbed. On Feb. 11, for example, a man knifed 13 people. “This weekend, a man with a grievance attacked people in a mall in Beijing. One person died,” the Beijing-based Wall Street Journal reporter Josh Chin tweeted. “Four days later a man with a grievance attacks people in a high school in Florida. At least 17 die. Guess the difference."

Several weeks before this latest massacre, on Jan. 23, the ruling Chinese Communist Party’s newspaper the People’s Daily published a graphic featuring statistics about gun violence, illustrated by a gun puncturing a gold target — knocking an Uncle Sam hat askew. The graphic wouldn’t be out of place in an American newspaper.

Why would Chinese state media need to embellish here, when the situation is damning enough?

Isaac Stone Fish is an international affairs analyst on PRI's The World. He is also a senior fellow at the Asia Society's Center on US-China Relations, a contributor on CBSN, and a journalist who regularly writes for places like The Atlantic and The Washington Post.