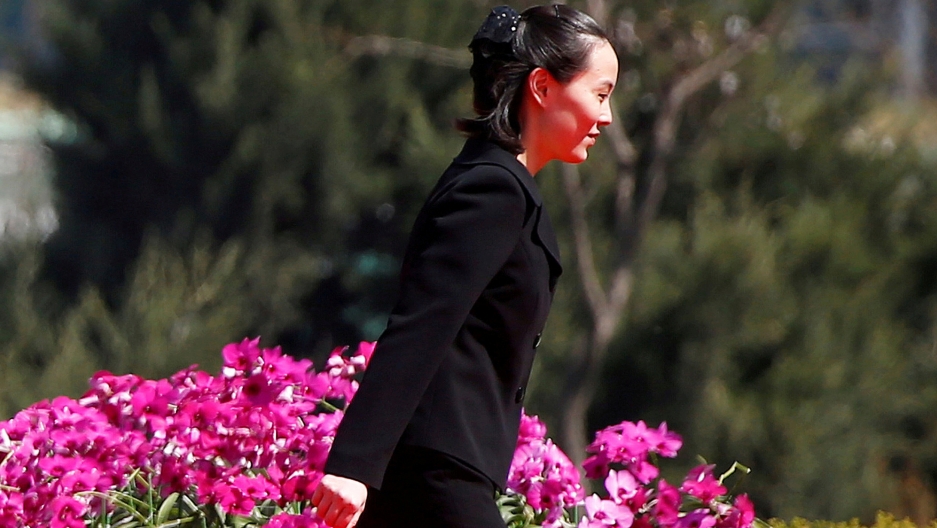 North Korea announced Wednesday that Kim Jong-un's 28-year-old sister, Kim Yo Jong will be attending the opening ceremony of the Winter Olympics on Friday.

Pyeongyang told Seoul that Kim Yo Jong would accompany Kim Yong Nam, North Korea's nominal head of state, along with Choe Hwi, chairman of the National Sports Guidance Committee, and Ri Son Gwon, who led inter-Korean talks last month, according to the ministry.

Kim Yo Jong would be the first member of the Kim family, born on the sacred Mount Paektu, which is a centerpiece of the North's idolization and propaganda campaign, to cross the border to the South.

Her inclusion in the delegation is "meaningful" as she is not only the sister of the country's leader but has a significant position as a senior official of the ruling Workers' Party, the South's presidential Blue House said.

But the trip could become a source of contention between Seoul and Washington, as she was blacklisted last year by the US Treasury Department over human rights abuses and censorship, while Choe faces a travel ban under UN Security Council sanctions.

Kim Yo Jong is vice director of the party's Propaganda and Agitation Department, which handles ideological messaging through the media, arts and culture. Choe had previously worked for the same body.

"One of the positives of her visit is that she is someone able to deliver a direct message on behalf of Kim Jong-un," said Shin Beom-chul, a professor at the Korea National Diplomatic Academy in Seoul.

"What is problematic is that she's coming with Choe Hwi. ... This raises worries that North Korea likely intends to use this Olympics as a propaganda tool, rather than a possible opening to meaningful dialogue with South Korea."

The opening ceremony will also be attended by US Vice President Mike Pence, Japanese Prime Minister Shinzo Abe and other world leaders.

Pence said after talks with Abe in Tokyo on Wednesday that Washington would soon unveil its toughest ever economic sanctions on North Korea, calling the country the "most tyrannical and oppressive regime on the planet."

Choi Kang, vice president of the Asan Institute for Policy Studies in Seoul, said, "The United States would be unhappy to see South Korea trying to undermine all the rigid sanctions that it had worked so hard to put in place by granting exemptions for the sake of the Olympics.

From princess to top policymaker

Having previously only occasionally appeared in the background, the young heiress has moved to the front and center of media photos more recently, assisting her brother at numerous state events.

In October, Kim Yo Jong was promoted to the party's politburo, an opaque, all-powerful decision-making body that decides top state affairs.

The promotion is a sign Kim Jong-un is consolidating his position by drawing his most important people closer to the center of power, experts and officials say.

On Tuesday, Kim Yo Jong was seen in state media greeting a North Korean art troupe that has since departed for the South to stage performances during the Olympics.

"She could deliver a message from Kim Jong-un in a way that conveys personal seriousness and commitment that even Kim Yong Nam couldn't," Andray Abrahamian, a research fellow at Pacific Forum CSIS in Hawaii, told Reuters.

"It may be a sign that Pyeongyang is going to pull out all the stops in the next couple weeks, in terms of making plans with Seoul."

A group of 280 North Koreans arrived on Wednesday in South Korea, one of the largest peacetime crossings of the inter-Korean border, to spur on athletes from the two sides at the Winter Olympics.

Besides the 229-member cheer squad that formed the bulk of the group, there were 26 taekwondo performers, 21 journalists and four North Korean Olympics committee members, including Sports Minister Kim Il-guk.

The delegation celebrated its first night in South Korea with a banquet at its hotel, dining on roasted scallops, steak, beef marrow soup and shrimp wrapped in thinly sliced radish, according to a pool report.

They arrived a day after a North Korean ferry crossed the border with a 137-strong orchestra to perform during the Games.

After the troupe's Tuesday arrival on the ferry, which is also being used as accommodation, North Korea asked the South to provide oil for refueling, the Unification Ministry said.

Oil is a sensitive item and has taken center stage in global efforts to curb Pyeongyang's nuclear and missile programs, with Washington urging a drastic cut in energy supplies to the isolated country.

North Korea has virtually no domestic oil production, and has traditionally imported its fuel from China and Russia.

In December, the UN Security Council unanimously imposed new sanctions on the North, seeking to ban nearly 90 percent of refined petroleum exports to the country by capping them at 500,000 barrels a year.

"There was a request for oil support during our discussions with the North after the ship arrived, and we're reviewing it now," ministry spokesman Baik Tae-hyun told a news briefing in Seoul.

In Tokyo, asked about concerns that South Korea was making exceptions to the sanctions, Japanese Chief Cabinet Secretary Yoshihide Suga said it was important not to let up pressure.

"We must not be fooled by North Korea's 'smile diplomacy,'" he told a news conference.

Reporting by Hyonhee Shin and Christine Kim in Seoul; Additional reporting by Heekyong Yang in Seoul, Soyoung Kim and James Pearson in Pyeongchang and Linda Sieg in Tokyo; Editing by Michael Perry and Clarence Fernandez.