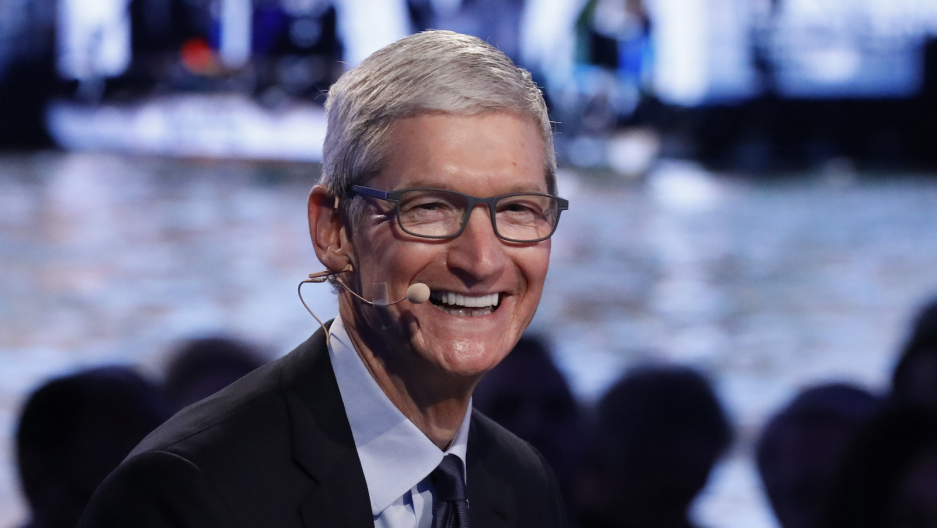 As far as CEOs go, Apple's Tim Cook is a fairly quiet one. He doesn't have the dramatic flair that Apple co-founder Steve Jobs was known for, opting for a more reserved demeanor. But Cook started to make waves a few years ago.

In early 2015, Cook noticed a law passed by the Indiana state legislature and signed by then-Indiana governor Mike Pence. The law, known as The Religious Freedom Restoration Act, allowed business owners who opposed homosexuality to refuse service to gay and transgender people on religious grounds. Soon after it passed, Cook, who had recently come out as gay, tweeted that Apple was deeply disappointed in the law.

Apple is open for everyone. We are deeply disappointed in Indiana's new law and calling on Arkansas Gov. to veto the similar #HB1228.

The tweet went viral and today has more than 13,000 retweets and 16,000 likes. A week after the tweet, the bill was revised. And Duke University associate professor Aaron Chatterji says it was one of the first examples of the new wave of CEO activism that's spreading across the business world.

Chatterji recently wrote in Harvard Business Review about how CEOs and the companies they lead are becoming more vocal about their political and social values. And he argues that there are a few reasons why more business leaders are speaking up, but, primarily, it's because they simply can't ignore social issues anymore.

"We've documented this political polarization that’s gripping the United States of America … and we're seeing much more ideological sorting," Chatterji says. "We're all kind of retreating to our own camps and our own echo chambers. In that kind of world, everything becomes political. And so, companies are being forced to respond to the hot-button issue of the day and they're feeling a lot like our politicians in Washington."

Cook is far from the only business person who's gone public about his beliefs. Chick-fil-A CEO Dan Cathy has openly opposed gay marriage, and last December, Patagonia took on President Trump's decision to severely reduce the size of several national monuments in Utah.

This is the largest elimination of protected land in American history.
Take Action: https://t.co/biZPxo7PHh#BearsEars pic.twitter.com/OqW9FHPk3Q

And while there are many cries on social media for companies to "stay in their lane," Chatterji says there's a chance that CEOs' activism might actually be enhancing their companies' image.

"It’s very difficult to attribute an increase in sales to a particular stance," Chatterji says. "But, my own study with Mike Toffel at the Harvard Business School does find that when Tim Cook spoke out against [The Religious Freedom Restoration Act] in Indiana, people's intent to buy Apple products did increase. And it does seem to be associated with the idea that Tim Cook had spoken out about an issue they cared about."

But sometimes, these public gestures of social activism backfire. Starbucks' "Race Together" campaign serves as a prime example. The campaign asked baristas to write the words "race together" on coffee cups to spark a conversation about race.  It did not go well.

"While the idea sounded good on paper, or on a coffee cup as it were, in execution there was a lot of pushback," Chatterji says. "People from the left side and the right side of the political spectrum said this isn't a good idea."

While more CEOs are starting to weigh in on social and political issues, brands have found ways to support causes in the past. Sometimes that support came in the form of an advertisement or a campaign contribution. Coca-Cola famously supported the Civil Rights Movement in the 1960s and spoke out against South African apartheid in the '90s.

But, as Chatterji points out, these were broad issues supported by a company as a whole. For the most part, CEOs have followed what's known as the "Michael Jordan dictum." The philosophy stemmed from a reported instance in which His Airness wouldn't comment on a political matter. Jordan didn't want to alienate consumers because, he allegedly said, "Republicans wear sneakers, too."

But, today, silence over an issue or a candidate can be interpreted as cowardice or silent support. And Chatterji says that many millennials pay close attention to CEO opinions.

"I find my students, who are mostly millennials, they predominately seem pretty open to CEOs taking stands," Chatterji says. "And [CEOs] think that millennial buying behavior might be different than the older generation's. There's the idea that some of these things CEOs are saying is really resonating with younger customers."

Chatterji says that some companies already weigh public opinion and the views of stakeholders before expressing their own. Ken Frazier, CEO of the pharmaceutical company Merck, is a prime example. Last year, after President Donald Trump said that both the left and the right were to blame for the violence during a white nationalist rally in Charlottesville, Virginia, Frazier (who is black) wanted to step down from Trump's manufacturing council. But he consulted his board of directors first before he proceeded to resign from the council.

Chatterji says that, increasingly, CEOs will be able to gauge public opinion through data analysis. They know people don't just buy with their heads; they buy with their hearts, too. And by analyzing the data we leave online, companies can learn what causes are important to their customers. With that kind of insight, CEOs will be able to speak out, without worrying about a looming public relations disaster.