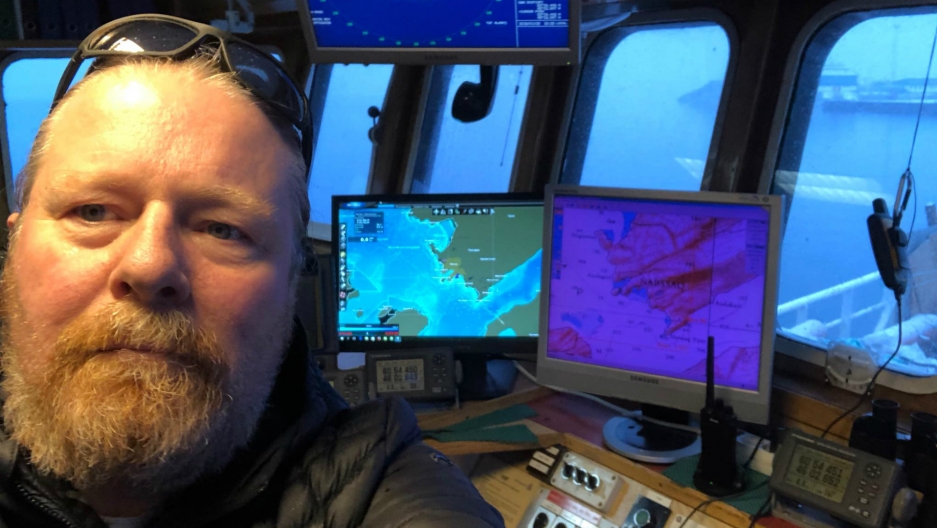 Kim Hoegh-Dam has seen the impact of climate change firsthand.

He’s a fisherman in Greenland and he’s literally observed the ice in the mountains above his hometown of Narsaq melt away.

“When I was a child, I remember where the edge was,” he says. “And now we [have to] walk, not meters now, [but] kilometers, to find the same edge of the ice.’’

Greenland is warming up, and it’s happening fast. Temperatures there have risen 1.5 degrees Celsius, or more than 2.5 degrees Fahrenheit, since the 1950s. That’s roughly double the increase worldwide.

But for Hoegh-Dam all this change is not exactly a bad thing.

Kim Hoegh-Dam says that he remembers when the ice was higher than the mountains.

Hoegh-Dam is the founder of his own fishing company, called Iluliaq Seafood A/S where he is also a skipper, and he says that business has been booming.

“The fishing is getting better and better. We have different species than we used to,” Hoegh-Dam explains, “The climate change — for some it is devastating, but for us, as fisherman, it is very, very good.’’

Henrik Leth, the chairman of Polar Seafood, one of the biggest fishing companies in Greenland, has noticed a similar uptick.

There are other local advantages to the ice cap — which makes up almost 80 percent of Greenland — melting.

On land, all sorts of natural mineral reserves could be exposed, bringing in a cash windfall.

And, says Leth, “we are saving money on heating our houses.”

Of course, all that warming and melting isn’t good for the rest of the world, since it’s contributing to a rapid rise in sea levels.

Related: In Greenland, a climate change mystery with clues written in water and stone

And the changing climate isn’t good for everyone in Greenland, either.

Traditional hunters, who rely on hunting with dog teams on ice for their livelihood, have been hard hit.

Hoegh-Dam says seal hunting, which has helped sustain Greenland natives for thousands of years, has crashed.

And some farmers have been struggling with drought.

Hoegh-Dam also points out that even though climate change might seem like it’s good news for some in Greenland overall right now, that might not last.

If the effects of climate change completely devastate other parts of the world, like the US and Western Europe, Greenland won’t have anybody to sell all of its newfound resources to.

There’s a saying in Greenland for a short-term boon like that.

“It’s like if you are outside in minus 30 degrees and you are freezing, you can pee your trousers, and you will get warm for a few minutes,” Hoegh-Dam says, “But still, very fast it will be very cold.’’