Dark rock above the Helheim glacier in southeastern Greenland marks its former level, before a sudden and dramatic retreat of hit many Greenland glaciers a decade ago. Scientists working on the Helheim and the fjord it drains into are looking for clues to the decline in hopes of predicting what might happen in the region as the climate rapidly warms.

The effects of climate change are starting to make themselves clear just about everywhere, but nowhere more dramatically than Greenland. The giant island holds the world's second largest ice sheet, and it's melting fast—an average of 287 billion metric tons of ice a year.

Global warming is the big culprit, but scientists aren't so sure about a lot of the details. And they need to be, to help figure what might be ahead for the rest of us as melting ice leads to sea level rise and big changes in the oceans.

Recently The World's Ari Daniel traveled to Greenland, with a group of researchers who are trying to unlock parts of the mystery.

Here’s the first of his reports from the edge of the ice sheet. (Read/listen to Part 2)

EDITOR'S NOTE: Gordon Hamilton, the lead researcher in the project to monitor the movements of the Helheim glacier, died October 22, 2016 during a research expedition in Antarctica, when when his snowmobile fell into a 100-foot-deep crevasse.

The breakfast on the edge of Greenland’s massive ice sheet is ordinary — granola, yogurt, bread and jam. Everything else here is anything but.

“You’d pay a million bucks for a view like this,” says Gordon Hamilton, from the University of Maine by way of Scotland. “Pretty nice breakfast buffet, I guess, for sitting out here next to the ice sheet.”

The three mile-wide Helheim glacier is one of the biggest outlets of the massive Greenland ice cap, the second-largest in the world.

Hamilton, Detective No. 1 in our Greenland mystery, is sitting on the rocky rim of a glacier. Kind of figures. After all, the man is a glaciologist. But this isn’t just any glacier. It’s the Helheim glacier, one of Greenland’s biggest, a three-mile-wide river of mottled gray, white and stunning blue ice that flows into Sermilik fjord on the island’s southeast coast.

We’re on one side of that fjord. Across, on the other side, is what drew us here — a horizontal stripe running the length of the fjord, about 600 feet above the ice.

“Everybody who’s come here with me has said, ‘What’s that line over there?’” Hamilton says. “And I say, ‘Well, that’s where the glacier was in 2003.’ It’s kind of like the signal clue that something really big had happened.”

Hamilton calls this clue the bathtub ring. Helheim’s surface sat right around the line for decades, maybe longer. But about a decade ago, he says, in the span of just a couple of years, it dropped dramatically and thinned out.

“And what that means is that all that volume of ice, from the current surface up to the height of that bathtub ring, is now in the ocean.”

Hamilton wants to know why, and what that big drop might mean for all of us.

Because it’s not just Helheim. Most of Greenland is covered by a massive block of ice, so big it’s difficult to imagine, even right here on the edge of it. Helheim is just one of thousands of glaciers that drain that ice sheet into the sea, and right around the time the bathtub ring showed up, some of the other big glaciers also changed suddenly.

So what happened here? To find our next clue requires going airborne, on a helicopter flying low above the fjord a few miles beyond the glacier’s terminus.

Icebergs the size of football stadiums lurk in every direction as one of Hamilton’s colleagues slides open the chopper door to one side. Roped into the chopper, he sits on the floor and shoots a thermometer trailing a spool of copper wire into the water. 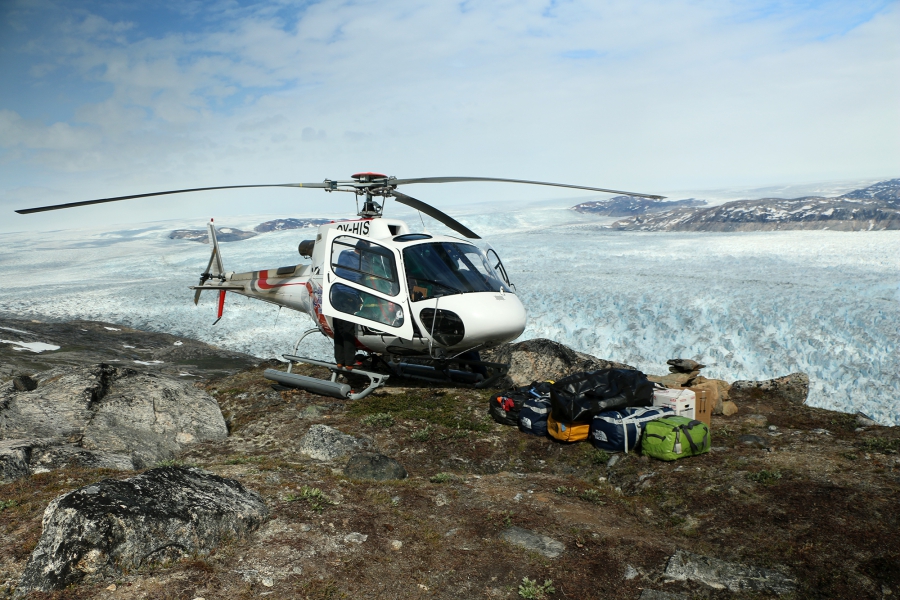 From their base on the side of the Helheim glacier, researchers from Gordon Hamilton's team fly out over the glacier and the Sermilik fjord into which it drains to gauge the movement of the glacier and tell-tale changes in the water.

As the probe drops below the surface, Hamilton watches the temperature data plot in real time on a screen. Near the surface it’s a hair colder than 0 degrees Celsius, or 32 degrees Fahrenheit, the freezing point of fresh water. But it’s not frozen, because salt water freezes at about -2 Celsius.

The water gets even colder as the probe goes deeper, but then it gets warmer again. At the bottom of the fjord, about 2,000 feet down, the temperature is 4.04 degrees Celsius, or 39 degrees Fahrenheit — downright frigid, but actually warm enough to melt glacial ice. For Hamilton, it’s another key clue in the mystery of Helheim and Greenland’s other rapidly receding glaciers.

“We think it’s this water that’s coming into contact with the edge of the ice sheet and causing the rapid melting and destabilization of the outlet glaciers,” Hamilton says.

We already know that some of Greenland’s ice is melting due to warm air overhead. But while he can’t be sure, because no one was measuring the water temperature here a decade ago, Hamilton thinks it was warming water below that probably triggered Helheim’s dramatic change.

Of course that answer just leads us smack into another question: where’s all this warm water coming from?

Sixty miles farther down the Sermilik fjord, Fiamma Straneo — Detective No. 2 — thinks she’s found the answer. Her research ship, a converted fishing trawler called the Adolf Jensen, is dodging icebergs near the mouth of the fjord, where “the glacier talks to the ocean and the ocean talks to the glacier,” as she puts it.

Straneo, a physical oceanographer originally from Italy and now at the Woods Hole Oceanographic Institution on Cape Cod, is using an array of instruments including temperature and salinity recorders to eavesdrop on that conversation. 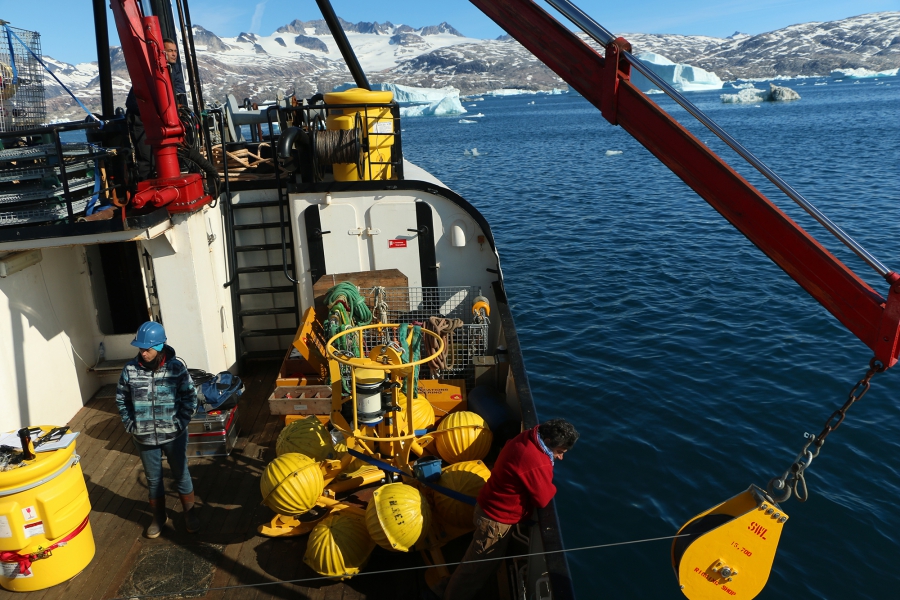 Oceanographer Fiamma Straneo peers into the Sermilik fjord from the deck of the Adolph Jensen, a converted fishing trawler. Straneo and her team of researchers are probing the depths of this and other fjords in the region for clues to the rate and source of meltwater flowing from Greenland's glaciers into the North Atlantic.

Straneo always knew that warm water from farther south in the Atlantic flows along the coast of Greenland. She also knew that climate change is helping make that Atlantic water even warmer than it used to be. But until a few years ago she thought that water stayed out of the fjords.

When she and her colleagues started plumbing the depths here, she says, “we had expected that we’d find some structural barriers where the fjord starts so that the waters couldn’t get in. But instead, we found these deep troughs. The fjord was wide open.”

And it was the same for others fjords in the region — nothing to keep out the warming Atlantic water.

This at least partly answers Gordon Hamilton’s question — how all that warm water is getting to the base of the glaciers.

But there are still other big questions. For instance, why did the glacier drop so suddenly a decade ago?

Hamilton says the evidence suggests there’s a kind of tipping point, that glaciers like Helheim can remain stable in near freezing water but that even a little more heat in the water can destabilize them

That doesn’t explain why Helheim seems to have re-stabilized. It also doesn’t tell us whether or when it’ll get hit with another massive melt.

But Fiamma Straneo says this fjord and its glacier are fairly typical.

She says she and her colleagues have found that “all the big fjords around Greenland are filled with these warm Atlantic waters. They’re very dynamic, meaning the potential is there for bringing a lot of heat to the edge of the glaciers.” 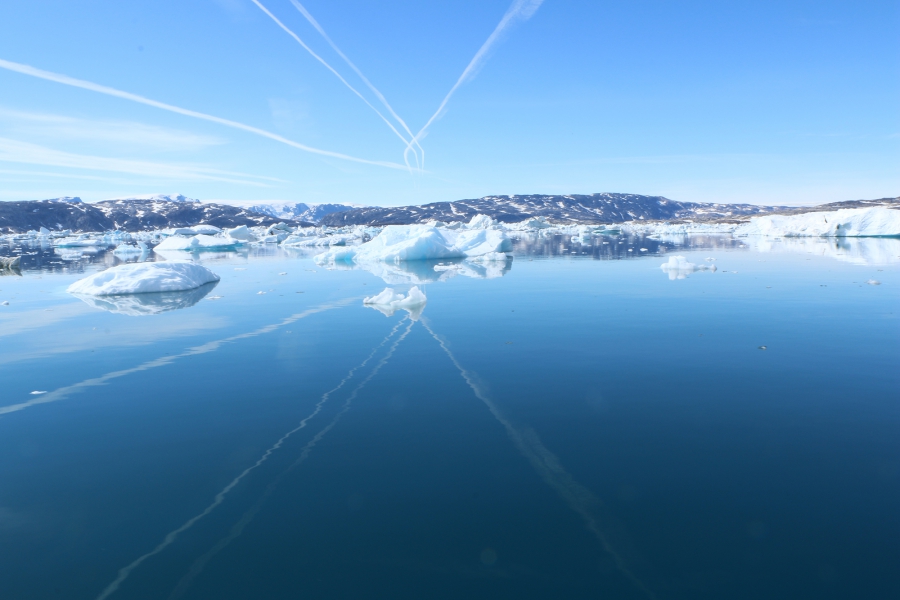 Jet contrails over the Sermilik fjord. Oceanographer Fiamma Straneo has found that warming water from the Atlantic is finding its way into this and other Greenland fjords, likely melting them from below and contributing to the loss of ice and flow of fresh water into the sea. “What’s happening in this fjord does not stay in this fjord,” Straneo says.

And she says one thing is quite clear. “What’s happening in this fjord does not stay in this fjord.” Or any other fjord up here.

There are trillions of tons of ice here in Greenland, enough to raise global sea levels 21 feet if all of it were to melt. No one can say yet how quickly that will happen. But Straneo says it’s vital to learn as much as possible, and fast. 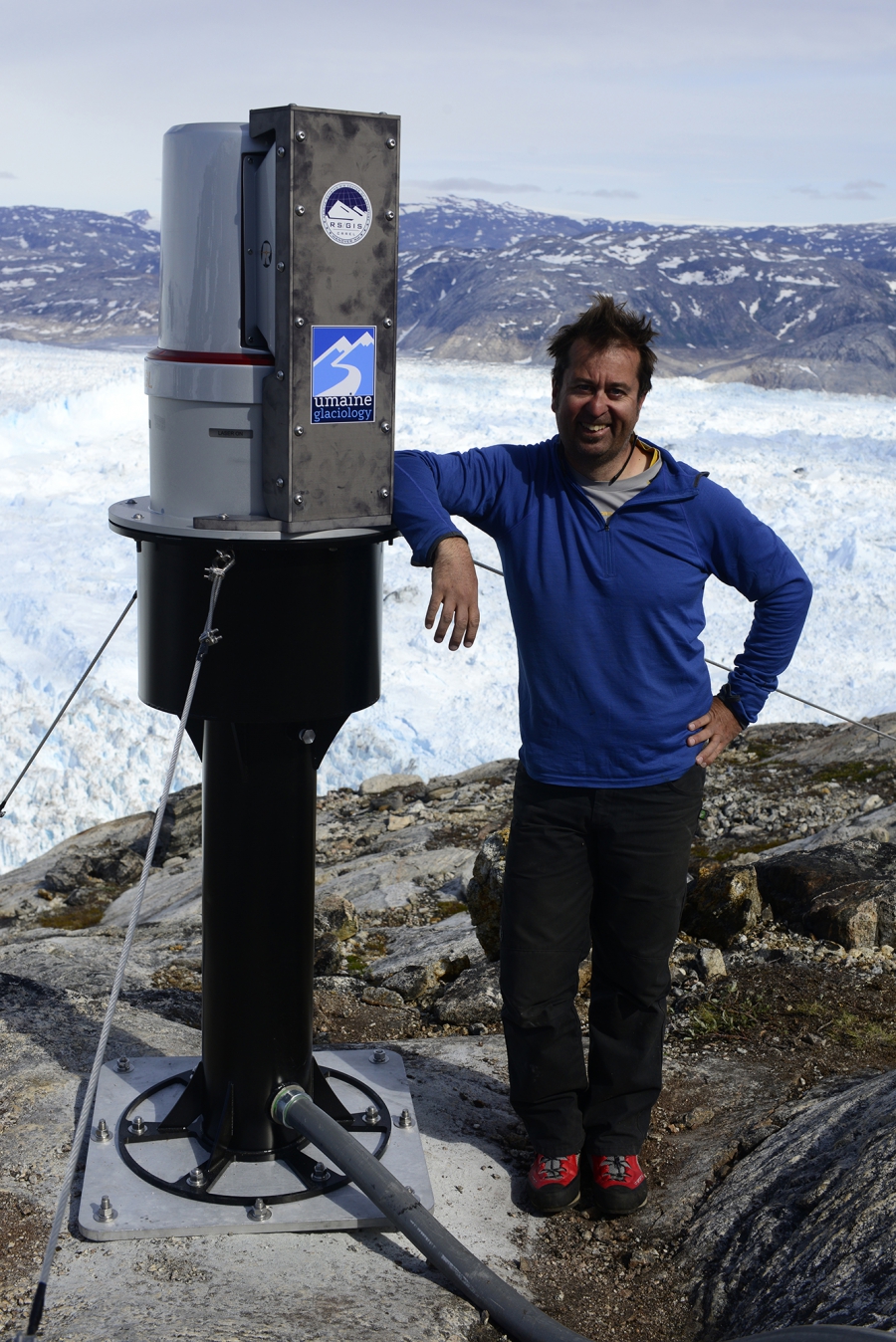 Glaciologist Gordon Hamilton from the University of Maine standing next to a new state-of-the-art laser his team has just installed on the rim of Greenland's Helheim glacier. The laser will scan the glacier in unprecedented detail and provide valuable clues to how it and others in the region might be being affected by climate change.

“There’s no doubt that sea level will rise in a warming planet — we have ice that is on land that will melt,” she says. “But what is important for humanity is to understand how quickly it will rise. We need to know this so that we can plan.”

For Straneo, that means continuing to probe the waters here for subtle changes in temperature, salinity, and even rare gases that provide telltale signs of where different patches of water are coming from.

For Gordon Hamilton, it also means intently watching the glacier itself, including its surface. That’s why back on land he and a team of engineers are installing a special kind of laser on a vantage point well above the bathtub ring, to make precise measurements of the terminus over the next year.

The idea, he says, is to monitor as many parts of the complex glacier-ocean system as possible, in as much detail as possible.

Hopefully, he says, with these new high resolution views, “we can start to link these two separate systems together and figure out what is the change in one system that causes the change in the other.”

Lots of mysteries to be solved up here. But one thing is not a mystery.

Greenland matters, to all of us.

This story was produced with help from our WGBH partners at NOVA and the Pulitzer Center on Crisis Reporting.

Meet Helhein, one of Greenland's largest and fastest moving glaciers.

And watch Ari's other NOVA videos from Greenland:  4 Things No One's Telling You About the Coming Water World / See a Glacier Like Never Before / Waging Science on the High Seas

EDITOR'S NOTE: A photo originally published with this story was of a smaller tributary glacier to the Helheim glacier, not the Helheim itself.