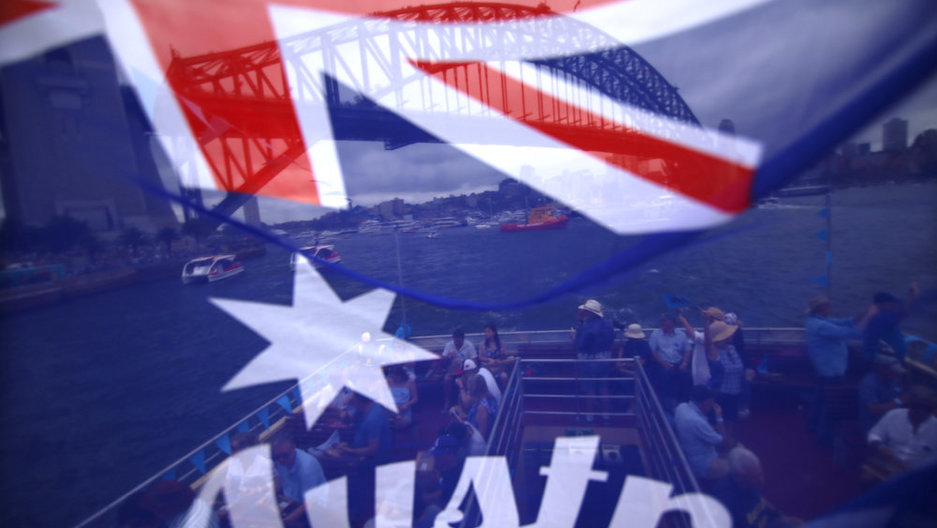 Passengers aboard a ferry can be seen through an Australian national flag as they participate in celebrations for Australia Day, which marks the arrival of Britain's First Fleet in 1788, on Sydney Harbour in Australia, January 26, 2018.

Share
Thousands took to the streets on Australia Day on Friday to protest against the celebration of the start of white colonization and persecution of Aboriginal Australians 230 years ago.
January 26 marks the anniversary of the first British settlers landing in Sydney Cove, New South Wales, in 1788, but for indigenous Australians, the date means the start of oppression, including dozens of massacres throughout the 19th and early 20th centuries.
More than 25,000 people, Aboriginal and white, joined a demonstration in Melbourne, Australia's second biggest city, organizers said, marching up to State Parliament House chanting "always was, always will be Aboriginal land."
One of the organizers, Ken Canning, of the Fighting In Resistance Equally activist group, said he hoped the rallies would increase awareness.
"The idea here is to engage the general public because our political spectrum around the country ... ignores the calls of Aboriginal people," he said.
At least 3,000 protested in Sydney, with rallies also held in Hobart, Adelaide and other cities. There were no reports of violence.
There are about 700,000 Aborigines in a population of 23 million in Australia, whose descendants date back about 50,000 years before British colonizers arrived. They suffer disproportionately high rates of suicide, alcohol abuse, domestic violence and imprisonment.
Protesters called for a treaty between indigenous and non-indigenous Australians, recognition in the constitution, and an end to inequality. Protesters want the date of Australia Day to be changed, or abolished altogether.
Whether to change the date of Australia Day has been a subject of debate for many years, as has whether to change the Australian flag, which includes the British Union Jack.
Prime Minister Malcolm Turnbull ruled out a change of flag.
"That’s the one they have on their backpacks when they’re traveling overseas, that’s the flag that our soldiers have on their shoulder patches, that is our flag,” he told reporters.
"So, I think the Australian flag will be flying over Parliament House long after all of us have shuffled off the stage of history."