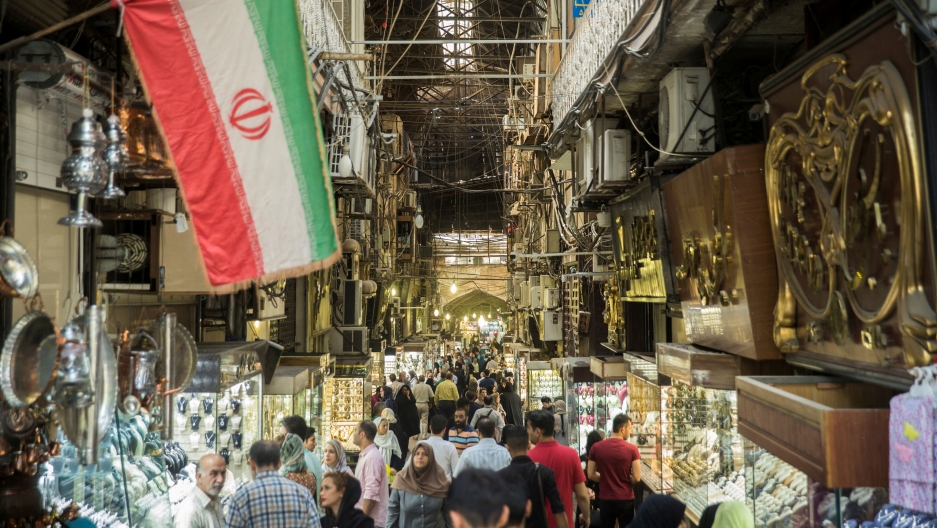 People shop at the Grand Bazaar in the center of Tehran, Iran in August 2017. Some business leaders are seeing hope in Iran's economy despite changing messages from the Trump administration over sanctions.

Even with President Donald Trump continuing to waive nuclear sanctions, Iran's economy remains hobbled by US restrictions but some diplomats in Tehran remain quietly confident for the future.

The real problem in Iran right now, everyone in the international business community agrees, is uncertainty.

That was not helped by Trump's announcement on Friday that he would waive nuclear-related sanctions, but only once more and that Europe must work with Washington to "fix the deal's disastrous flaws, or the United States will withdraw".

"No one has any idea what's going on. Trump has introduced so many layers of uncertainty," a Western trade official in Tehran said on condition of anonymity.  "That's not necessarily negative. Things could actually improve if Trump pulls out of the deal. The Europeans could stay and the EU could provide protections for its industries against US sanctions."

"Or things could get even worse. We just don't know," he said.

On the surface, Trump's vitriolic stance appears disastrous for the 2015 nuclear deal between Iran and world powers, which lifted many sanctions in exchange for curbs to the country's nuclear program.

Even as he confirmed the waiver of nuclear sanctions on Friday, Trump added yet more sanctions related to human rights and Iran's missile program, adding to a vast web of restrictions that have scared off many Western companies.

Major foreign banks have been particularly cautious of re-entering Iran, dreading a repeat of the record-breaking $8.9 billion penalty leveled on France's BNP Paribas for breaching US sanctions on Iran and other countries.

There seems little hope of hitting the government target of $50 billion in foreign investment per year, with the government saying less than  $3.4 billion was achieved in 2016.

But European diplomats say a lot is happening behind the scenes.

Deals for things like industrial equipment, solar parks and dairy farms have been quietly building over the past two years.

"I'm still cautiously optimistic," said one European diplomat. "Many firms have invested so much they can't pull out. They will find a way to make it work whatever Trump does."

The big difference under Trump is secrecy.

"Deals are going on in complete silence," said the Western trade official. "There's no advantage to discussing it. Many have interests in the US or an American investor. They don't want to make themselves a target."

Some bigger firms — particularly the French — have been less coy.

"The divide between Europe and the US is widening," said Farid Dehdilani, international affairs advisor for the Iranian Privatization Organization. "It's been more than a year that President Trump is trying to undermine this deal but he's basically failing,"

Nonetheless, the initial excitement that accompanied the nuclear deal has evaporated.

"I was working in the stock market when the deal was signed, and we were so excited and hopeful, but when I check with friends in brokerages now, nothing is happening," said Tehran-based economic analyst Navid Kalhor. "The only sectors that get any interest are commodities: oil, mining, petrochemicals. But oil money cannot solve all our problems."

Iran's return to international oil markets helped propel its economic growth rate to more than 12 percent last year, but unemployment remains huge and the energy sector can only create few jobs at a time.

"Look at the protests — ordinary people are not optimistic about the future," said Kalhor, referring to the deadly unrest that rocked dozens of Iranian cities over the new year, sparked by anger over unemployment and poor governance.

"We need better and more reliable trade partners and more access to international markets. We are mostly borrowing money rather than attracting investment. This can cause more problems in future when we have to service our debts. It's a vicious circle," he added.

The problem, many Iranians are quick to emphasize, does not lie just with Trump.

Years of mismanagement and corruption would make Iran a tricky investment destination even without US antagonism.

"We have to facilitate foreign investment by eliminating unnecessary bureaucracy: the three or four months needed to get permits, for instance," Dehdilani said. "In the end, the success of the nuclear deal relies on Iranians."