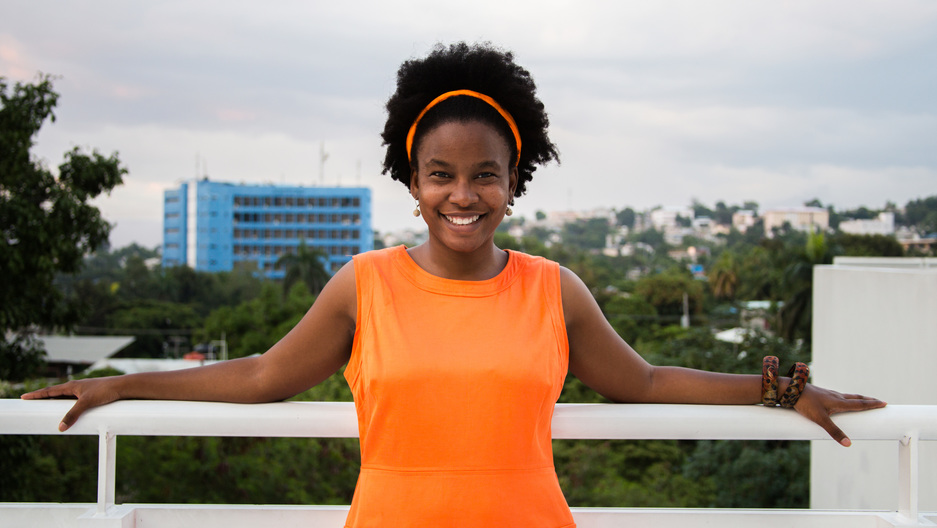 Corinne Joachim Sanon went back to Haiti to start a business, and she located her business, Askanya Chocolatiers, in the house where her grandmother grew up.

Corinne Joachim Sanon sits in the front yard of the Port-au-Prince home she grew up in with her mother, brother and grandparents.

It’s been almost completely rebuilt since the earthquake hit on Jan. 12, 2010, thanks to her mother’s hard work. But there’s one thing that the family can’t make whole again.

“My grandma is actually buried in the garden,” Sanon says.

Sanon’s grandmother was crushed in the falling house and is buried by a small tree at the edge of the yard. She’s one of the hundreds of thousands of people killed in the 7.0 magnitude quake. It caused such extensive infrastructural damage that the country still hasn’t fully recovered.

When it happened, Sanon was working toward an MBA at the Wharton School, at the University of Pennsylvania. For once, the highly driven, self-described nerd who skipped two grades was momentarily derailed.

“After the earthquake, I had to take like a half semester off,” Sanon says, “so it made it a pretty tough two years at Wharton because I was very, very close to my grandma.”

After getting her business degree, Sanon spent two years consulting for Barclays in New York, making a six-figure salary. And she had another good reason to stay in the US.

“I ended up meeting my German husband,” she says, and that made her “kind of alter” her plans to move back to Haiti. She still knew she would go home and start a business here, but she promised her new husband two things: She would spend six months of the year with him in New York and she would name her Haitian company after his hometown in Germany.

The earthquake, Sanon says, only reinforced her sense that she had to pursue her three goals.

“I wanted first to transform a local crop,” she says, “and the second goal was to create blue-collar jobs and the third goal was for it not to be in Port-au-Prince.”

This last one reflects a common goal after the earthquake — to decentralize.

“After the earthquake, we realized that a lot of things were destroyed and a lot of infrastructure and a lot of services were not available anywhere else than in Port-au-Prince,” Sanon says. It was widely observed that the death toll wouldn’t have been so high if so much of the population hadn’t been forced to move to the capital, near the quake’s epicenter, for jobs and school.

For her new business, Sanon had her eye on a spot several hours north near the border with the Dominican Republic, in the city of Ouanaminthe, where her grandmother’s childhood home sat vacant.

“So I was like, ‘Can I use it?’ And they were like, ‘Yeah, sure.’ And I transformed it into a chocolate factory.”

In researching local crops, Sanon had found that Haitian cacao is used in some of the finest French chocolates.

So she started Haiti’s first bean-to-bar chocolate factory and called it Askanya, a Latinized and Creolized version of her husband’s hometown of Aschersleben.

Instead of paying off student loans, Sanon poured her savings into the chocolate business.

The day I wanted to visit, she wasn’t able to show me the factory because she was flying to Paris to attend an international chocolate trade fair. But I made the trip anyway, to the small house on the dusty main street of Ouanaminthe.

At the factory, James Dobson, the production chief, tells me he’s from Cite Soleil, the shanty town outside of Port-au-Prince. Cite Soleil was gripped by gang violence, so he came up here to finish high school. He later went to university to study business back in Port-au-Prince, but returned north for this job.

Askanya has 10 full-time employees and works with local cacao and sugar cooperatives, representing more than 3,000 growers. All but one of the factory workers are women because that’s what Sanon wanted. 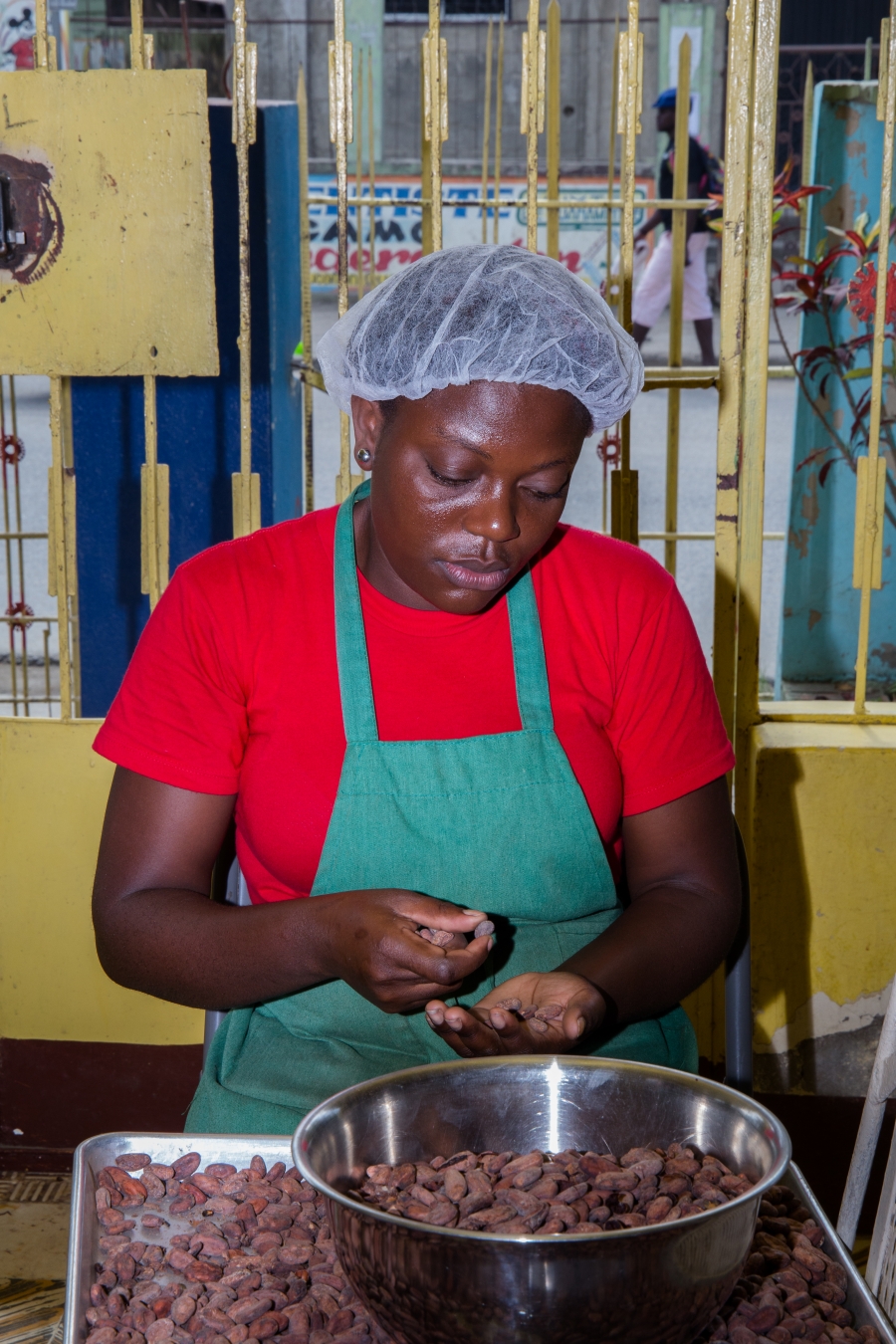 Sorting cacao beans at the Askanya chocolate factory in Haiti. Most of the employees are women.

Jocelyne Diomètre sifts through the cacao beans, removing any imperfect ones. She also wraps the bars in paper designed by a Haitian American artist adorned with local flowers and hummingbirds.

Diomètre says she used to work as a maid in the Dominican Republic, but she hated having to cross the border every day. She’s 34 and this is her first job in Haiti.

The women here at the factory make $5 a day, the minimum wage. But it’s more than double what the average Haitian lives on.

Beyond salaries, the costs of doing business here are steep.

All of the machines — mixer, refrigerator, air conditioner, generator — have to be purchased overseas. Dobson says the machines break often and when they do, it’s impossible to find a technician to fix them in Haiti.

Electricity is also a constant problem. The chocolate needs to be in a refining machine for 72 hours straight and then kept cool, which means running a generator non-stop, burning expensive fuel.

In Haiti, Askanya’s chocolate bars sell for upwards of $5 each —and in the US the price is more than $6 — which means it’s more than most of Sanon’s employees make in a day.

She says she has to make something high-end.

“The thing about producing in Haiti,” Sanon says, “is that the costs are so high that it doesn’t make sense or is not viable to produce something low quality.”

It helps that materials in Haiti tend to be organic because pesticides are so rarely used. “So, you can create a high-end product that you can charge more for,” she says. “Not that you’re making more money, but you can at least break even, given the very high cost structure.”

Last year, the insurance company FM Global ranked Haiti as the worst place to do business out of 130 countries it surveyed, because of factors that include corruption and natural hazards.

Sanon says she manages by being constantly ready to adjust her plans.

“I’ve never chosen the easy path in my life,” she says, “and I’m never scared of the challenges.”

Regine Theodat is a Haitian-American attorney who returned in 2010 to help earthquake survivors understand their legal rights. But she soon discovered what Haitians really wanted were jobs. So in 2012, Theodat launched a business, Myabèl, which has grown from a single bar and restaurant to a food company that employs 18 Haitians in Croix-des-Bouquets, east of the capital, Port-au-Prince.

"We have our restaurant that does catering and also in-house dining," she says. "We have a processing facility where we process raw ingredients from Haiti and transform them into four product lines: We have a craft cocktail line, a hot sauce line, a cooking sauce line and an ice tea line. Yeah, we have a lot going on — we also have a farm as well."

Theodat says after five years Myabèl is now returning a profit, but the margins remain slim.

Askanya is not yet generating enough revenue to pay off Sanon’s investors, but the business is less than three years old and Sanon says she’s patient.

“I wanted to create it in my 30s or at least while I was young so that by the time I’m in my 60s, I’ll be able to see results,” she says. “Financially it’s tough, but I guess it’s tough for any entrepreneur. The first years are tough.”

Her plan is to expand Askanya and pay off investors, who include herself and her husband. She’d also like to put profits into Teach for Haiti, an education program created by another member of the Haitian diaspora.

Sanon says she knows her grandmother would be proud.

Theodat, whose parents fled Haiti's civil unrest in 1986 to settle in the US, says her return to Haiti at first got a mixed reaction from her family.

"One thing you have to remember about the diaspora is that the entire purpose of leaving Haiti was to provide your children with a better life," she says. "So I think it was difficult for them to understand. But it's been eight years now. And I think this generation of the diaspora — that has come back — has opened up new doors for their parents to reconnect with the country that they tremendously loved but had no choice but to leave for the safety of their children."

"I had moved to Haiti with the idea of being here for three months," she says, "and then I started working, and I started feeling a connection that I hadn't felt before. And I guess after a while somebody said to me, 'you're home.'  And as much as I 100 percent feel as if I'm an American, I've always felt 100 percent Haitian."

This story was produced in association with Round Earth Media, which is supporting the next generation of global journalists. Michel Joseph and Stephen Snyder contributed to the report.

Correction: The original version of this story incorrectly stated the location of Croix-des-Bouquets.