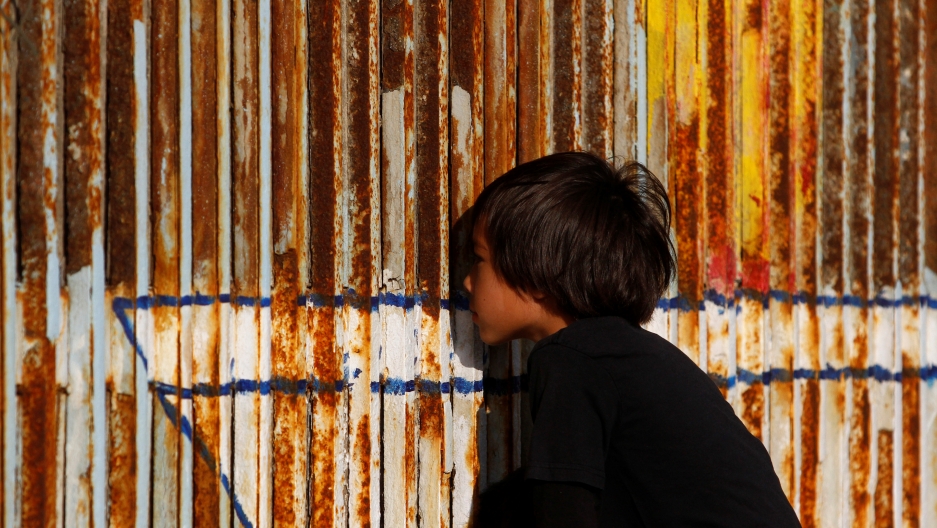 A child in Tijuana peers through the double steel fence that separates the US and Mexico.

There's talk on Capitol Hill of a deal to protect the people some immigration activists call "Dreamers."

In September, President Donald Trump's administration began dismantling DACA, the Deferred Action on Childhood Arrivals program, created by President Barack Obama to provide temporary protection from deportation and work authorization to undocumented immigrants who were brought to the US as children. People will begin losing DACA status in Mar. 2017, unless Congress passes legislation for undocumented immigrants brought to the US as children. On Tuesday, a federal judge ordered the Trump administration to reinstate the DACA program while legal challenges proceeds.

The president and members of Congress are now debating ideas to revive the program. But there's also talk from Republicans, including the president, of attaching conditions to any deal — like expanding the border wall with Mexico.

This week has been a “roller coaster of emotions” for Christian Ramirez, an activist with the Southern Border Communities Coalition, as hope for a deal has ebbed and flowed.

Ramirez lives in San Diego but he’s currently in Washington, D.C. to lobby for an immediate solution to the DACA crisis.

He’s cautiously optimistic. “We still have a long road ahead of us,” he says, “but we want to make sure that we don’t leave Washington, D.C., this month without a solution.”

He says a deal should not have conditions. “We want to make sure Dreamers are not used as bargaining chips to pass anti-immigrant policies.”

“Now as an adult, as a father, my child has to endure living through the indignities of having to prove his citizenship in the United States based on his last name and based on the color of his skin.”

Ramirez highlights the checkpoints maintained by the Customs and Border Patrol inside the US, on the county lines between San Diego County and its neighbors, Orange and Imperial counties.

“Every single member of my family, everyone who I know, all of my colleagues have had to endure the indignity of having to be searched, having [them] go through our personal belongings and having to prove to US federal officials who we are, despite the fact that we’re not entering or leaving the country, we’re simply going from one community to the next.”

“It’s happened here for generations, and frankly we’re sick and tired of it.”

The Customs and Border Patrol denies using profiling, which it describes as an “invidious” practice.