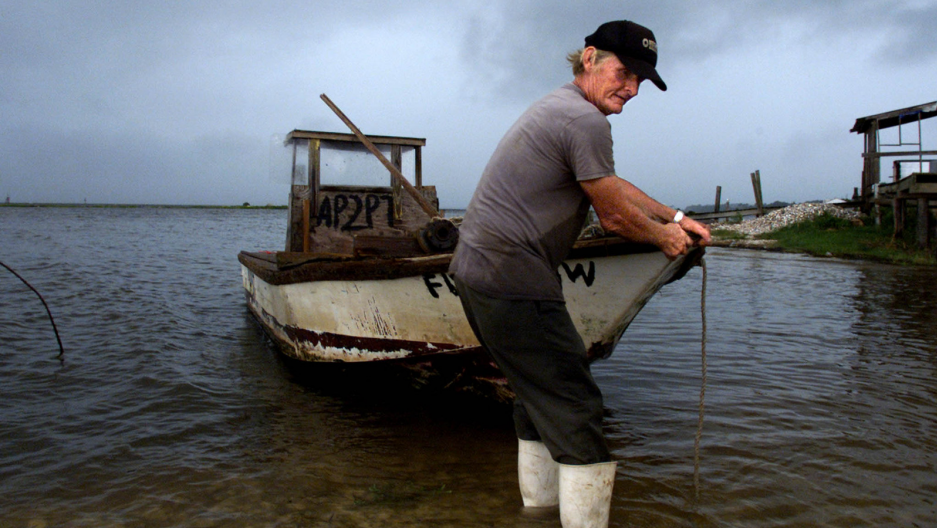 Commercial oyster fisherman Charles King prepairs to pull his aging oyster boat from the rich oystering waters of Apalachicola Bay. The bay was once one of the largest oyster-producing regions in the US but the oyster fishery collapsed in 2012 because of drought, over-fishing and increased salinity in the Apalachicola Bay due to decreased freshwater flow.

The US Supreme Court heard arguments on Monday in a bitter fight over water pitting two American states against each other.

On one side in the decades-old dispute is the state of Georgia.

On the other is its southern neighbor, Florida.

Florida v. Georgia concerns the Chattahoochee and Flint rivers, which originate in Georgia, join to become the Apalachicola River and flow downstream into Florida and the Gulf of Mexico.

Florida is seeking to have restrictions imposed on how much water Georgia can use from the rivers, arguing that the state's once-lucrative oyster industry in the Apalachicola Bay is drying up.

"Florida has suffered real harm as a result of Georgia's ever-increasing consumption of upstream waters," Gregory Garre, an attorney for the state, told the nine Supreme Court justices.

Georgia argues that the water is needed to provide for farmers in the "Peach State" and for Atlanta, a thriving metropolis of more than five million people that is also the headquarters of Coca-Cola.

"Florida has not made the case that it needs more water at a time when there is plenty of rain and water in the system," said Craig Primis, an attorney for Georgia.

"That water just will wash out to sea and won't benefit anybody," Primis said.

Justice Elena Kagan appeared to lend a sympathetic ear to the arguments of Florida but it was unclear from Monday's arguments how the court will rule.

"You have common sense on your side," Kagan told the attorney from Florida.

The Apalachicola Bay in Florida's panhandle on the state's "Forgotten Coast" was among the top oyster-producing regions in the country until recently.

But the oyster fishery collapsed in 2012 because of drought, over-fishing and increased salinity in the Apalachicola Bay due to decreased freshwater flow.

To save its oyster industry, the "Sunshine State" launched a legal battle two decades ago which has cost tens of millions of dollars.

Ralph Lancaster, a court-appointed "special master" named to look into the case, found last year that Florida had suffered from the reduced flow of the rivers.

But he determined that no remedy could be found without the participation of the US Army Corps of Engineers.

The corps controls five dams on the Chattahoochee River but it is not a party to the lawsuit and answers to Congress.