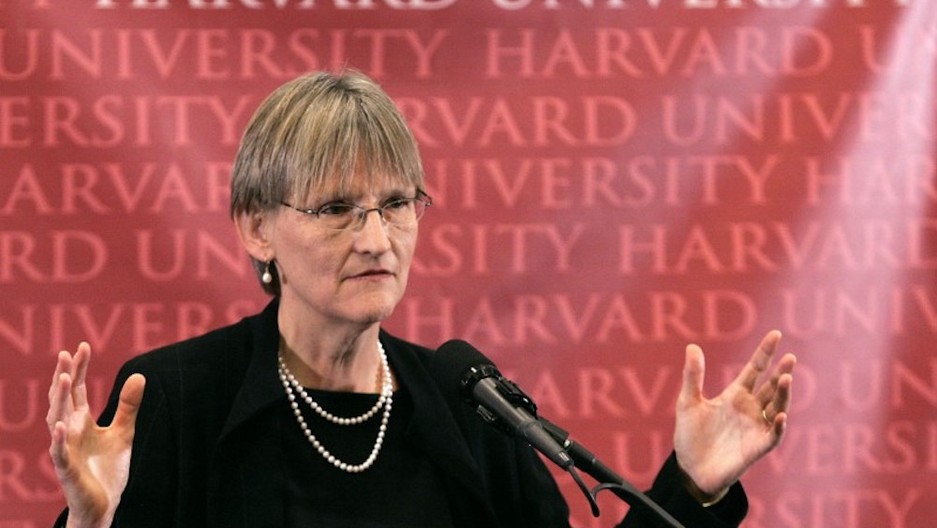 Drew Gilpin Faust speaks to reporters after being introduced as the 28th president of Harvard University in Cambridge, Massachusetts February 11, 2007.

Historians study the beginnings of things, even their first work experiences. For the latest in Reuters’ “First Jobs” series, we talked to a few prominent historians about their introductions to employment.

I grew up in Virginia’s Shenandoah Valley. My first full-time job, after graduating from college, was working for the Department of Housing and Urban Development in Philadelphia.

This was back in 1968, so it turned out to be a pivotal time in the American experience. They had us go around to communities in states like Virginia, Pennsylvania and Maryland, talking to people about all the issues they faced. It was a real introduction to urban life for a girl who had grown up on a farm surrounded by horses, sheep, cows and pigs.

When I was 11 or 12 I had a job taking care of a toddler in Nashville during the summer. One day, I saw phonograph records on the shelf, so I took some down and played them. One of them I really liked – I think it was Beethoven’s symphonies. When the mother came home and I told her I really enjoyed her music, she got mad at me, because she hadn’t told me I could touch them.

I didn’t say anything to my mother, because I didn’t know what she would think. But when I told one of my favorite aunts what had happened, she told me to stay out of white people’s things, because they would think I was a troublemaker.

What I learned about myself that day, is that I have always been very curious about things – even things I am not supposed to know about. I like to ask questions, and find out stuff that other people think is not my business. Over my career, I ended up going to lots of places I wasn’t supposed to go, and asking questions I wasn’t supposed to ask. And now, every time I listen to Beethoven, I think about that story.

Senior Fellow, Hoover Institution; author, "The Square and the Tower"

My working life started - and ended - in a Hell's Angels pub in the town of Ayr, in the west of Scotland. The name of the pub was Rabbie’s, in honor of the poet Robert Burns, Ayr’s most famous son.

There was little that was poetic about the denizens of Rabbie’s. They would get off their motorbikes, lumber up to the bar and mutter unintelligible things like: “Pintofheavyandafamousgrouse,” which meant they wanted a pint of McEwan’s Export and a glass of a popular blended Scotch whisky. I would reply "I beg your pardon?" and they would lean over the bar and grab me by the testicles and say the exact same thing, only louder.

I lasted a week. Nevertheless, I had learned something important, namely that I was constitutionally unsuited to unskilled manual work. I resolved never to do it again.

When I arrived at Oxford, I encountered men whose job it was to sit in book-lined studies with oak panels and mullioned windows and read, write or talk about history. And that was for roughly half the year. The rest of their time was their own to spend in dusty archives or in country houses, as they saw fit.