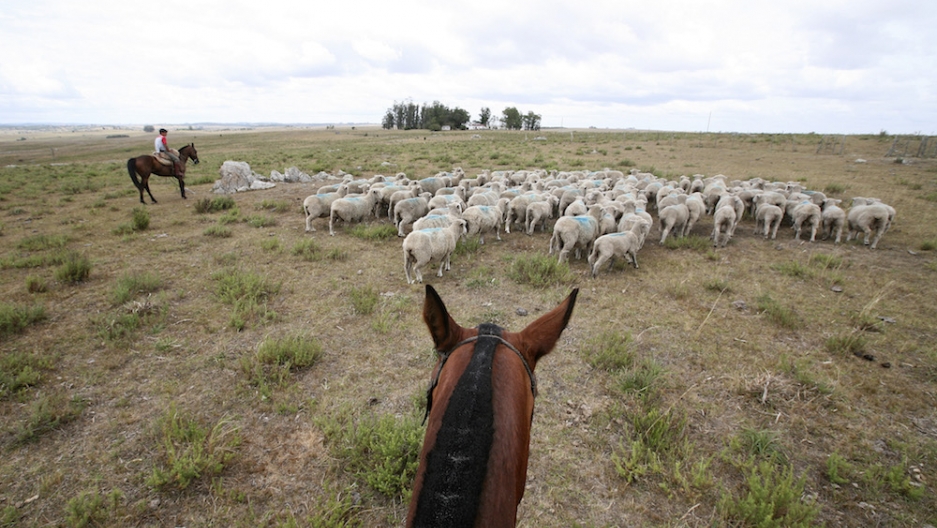 Sheeps are herded on ranch near Cerro Colorado, 105 miles northeast of Montevideo, Uruguay. The country is one of the top exporters of textile fiber.

With one hand, breeder Sebastian Saura holds the head of a sheep and with the other, in a matter of minutes, he shears the animal down to its tender pink skin.

It is the first phase of a trip that will take wool from Uruguay — one of the world's top exporters of the textile fiber — to Germany for use in the seats of luxury cars.

At this farm in central Uruguay, 17 workers spend three days shearing 2,600 sheep. They do it in the southern hemisphere's springtime, before the summer heat sets in.

Some of the workers are tasked with going into a pen to grab the animals, which can weigh up to 110 pounds, and then lugging them into a hangar where they are held down to give up their fleece.

"There is a real team spirit. We are very well organized because that is the only way to work," said Saura, 22, working alongside his father Roberto, who has been shearing sheep for 36 years.

Nestled between Brazil and Argentina, Uruguay boasts a population of 3.5 million and nearly twice as many sheep — 6.6 million.

To sell all that wool, it has to look abroad. Of its annual production of nearly 30 million kilos, only one percent is absorbed by the local market.

"It is more expensive to bring wool from Salto in northern Uruguay than it is to send it to China," said Facundo Ruvira, commercial director of Tops Fray Marcos, the country's biggest plant for washing and combing wool — a practice abandoned decades ago in western Europe.

Indeed, Uruguay is one of the last countries in the world that exports large amounts of wool that has been washed and combed, unlike Australia and New Zealand, which ship it dirty in its roughest form.

In this particular added-value segment, Uruguay is the world's third-largest exporter with a market share of 12 percent, surpassed only by China and the Czech Republic.

While the country's thinnest wool, such as merino, goes to the luxury fashion industry, thicker wool from a breed of sheep called corriedale — the most common kind in Uruguay — is used in the seats of high-end German cars and in aircraft.

Ruvira said his top client for the past 20 or 30 years has been the Austrian group Schoeller, which supplies the auto industry and is very demanding about the wool it buys.

At his plant, Ruvira shows how wool is separated into long- and short-strand varieties, washed in cold and then hot water, with soap and then without, before finally being combed and packaged for shipping.

The process adds value but also creates jobs for 150 people at the Tops Fray Marcos plant in Libertad, west of the capital Montevideo.

The wool then travels by freighter for 25 days before it reaches Germany, where the wool is transformed into carpets or fabric for BMW and Mercedes-Benz cars, said Ruvira.

In the town of Hard in western Austria, the owner of Schoeller, Kurt Haselwander, praises what he calls the subtlety of Uruguayan wool — he buys 800 tons of it a year — and its elasticity and softness.

Another thing that makes it stand out in comparison to Australian or New Zealand wool is that sheep are treated better in Uruguay, he says.

To wit: sheep in Uruguay, unlike in those other two competitors, are not subjected to a technique called mulesing, in which a piece of skin is sliced from around the anus of a sheep without anesthetic.

This is done to produce a scar free of wool, fecal and urine stains and thus prevent what is known as flystrike, when flies lay their eggs on the skin of sheep and these hatch into larvae that feed on the sheep's tissue.

Schoeller uses the wool to make sweaters, socks and other garments, as well as upholstery for luxury car seats and the seats in business class on planes because it does not wear down as easily as other kinds of wool, Haselwander said.

In cars, wool is used because it is safer — it does not burn like synthetic materials, said Carlos Piovani, who oversees shearing at the Uruguayan Wool Secretariat.

Synthetic materials derived from oil are the big competitors of wool, and the sector has suffered dearly because of it, both here and around the world.

"Thirty years ago, we had 20 million sheep," said Piovani.

But Uruguay is counting on a recent rise in wool prices and is proud of its higher quality.

Uruguay exports wool to the tune of $250-300 million a year, the same as 30 years ago, but with a lot less of the stuff, said Piovani.